Why is it more dangerous to have belly fat?

Even people with normal BMIs have to watch out for midriff flab. 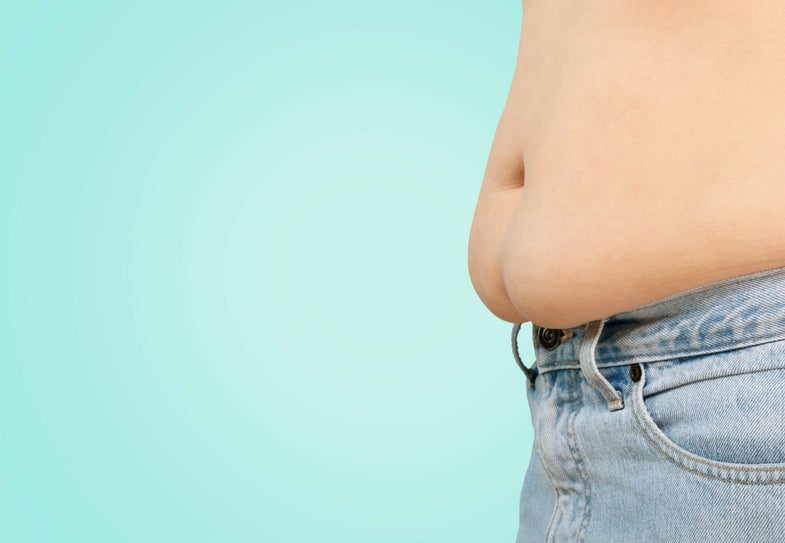 Belly flab has long been used to body-shame people into joining various weight loss programs. In recent years, though, a real reason to shed inches off your waist has emerged: to stay healthy. Research suggests that a wide waist increases risk for cardiovascular disease, diabetes, and cancer. Even if you’re otherwise at a healthy weight for your height, excess abdominal fat significantly raises your likelihood of developing all of those diseases.

This seems to relate to where our bodies regulate weight. We think of our metabolism as a whole-body phenomenon, but the reality is that particular organs determine whether we gain or lose weight. If body fat is concentrated in areas that influence those organs, it can be much worse for your overall health.

Fat is not created equal

There are two kinds of fat in this world, and none of them are “skinny fat.” One is subcutaneous, the layer of fat cells under your skin but not quite inside your body cavity. This fat is pretty healthy—we all have some, and we all need it. Your body uses fat to store fuel. The other, more dangerous kind, is visceral fat. These are fat cells accumulated inside the body, in and around your organs.

Belly flab tends to be of the visceral variety, especially in men. Women generally gain weight around the butt and hips, because it seems to be evolutionarily advantageous to have this extra layer around the baby-making area. Unfortunately, there’s no advantage to a potbelly if you don’t plan on carrying a baby.

Fat cells in the abdomen seem to have a bigger impact on the metabolism because blood flow from that area drains straight to the liver. All cells excrete things, because all cells have waste and other byproducts that they need to get rid of, and adipocytes are no exception. As you gain weight in the abdomen, those visceral fat cells expand, and eventually they start leaking free fatty acids and other molecules into the liver. Since your liver helps control your blood sugar levels, these surplus chemical signals wreak havoc with your metabolism. Faulty blood sugar wiring leads to the massive post-meal insulin spikes that prompt your body to put on more weight, which eventually can cause diabetes.

Visceral fat on the liver seems to have a much bigger impact than fat on other organs, but deposits on the heart and pancreas (where insulin is made) can also feeds into an unhealthy metabolism.

But this is still a theory

Like a lot of our understanding of the metabolism, the liver-draining theory is still unproven. It’s incredibly hard to conduct experiments in a real, live person that test exactly how abdominal fat affects the metabolic system.

We do know that the dangers of excess belly fat persist even after you control for all the other factors. Fat on the liver in particular seems to highly predict whether a person will later have metabolic issues, even if they’re not obese. Your risk of death overall seems to be at least twice as high if you have a wide waist, despite a normal BMI, than if you have a slim one.

So how do I know if my waist is small enough?

Like BMI, what makes a healthy waist size will vary a bit by height. In general, though, you’re low risk as a woman if you’re at 31.5 inches or below, and high risk above 35 inches. For men, it’s 37 and 40 inches respectively. Hip-to-waist ratio is an even better metric in terms of predicting health, but because body shape varies between populations there aren’t yet solid cut-off numbers for what’s healthy or not. Most studies suggest it’s ideal to hit under 0.9 for men and 0.8 for women, though the numbers need to be tailored to specific ethnic groups to be relevant.

The good news is that if you’re above that threshold, even small amounts of weight loss can have a huge impact on disease risk. You don’t have to maintain Hollywood’s hilarious idea of a perfect beach bod to be significantly healthier. The bad news, however, is that you can’t target weight loss. All those ab-blasting ads were lying to you, and doing more crunches won’t melt inches off your waistline. The only way to lose belly fat is to lose fat overall, and (generally) the only way to do that is to cut down on your caloric intake and amp up your caloric burn.

Since it’s January, this is the perfect time to join a gym and really commit to weight loss. Everyone is running deals, hoping that you’ll sign up and never come back, but you can show those losers by actually showing up for the rest of the year. Start small, work your way up, and know that you’re on your way to a healthier you.