Scientists scrutinizing Cassini imagery have stumbled on a strange find — evidence of half-mile-sized snowballs perforating one of Saturn’s rings,... 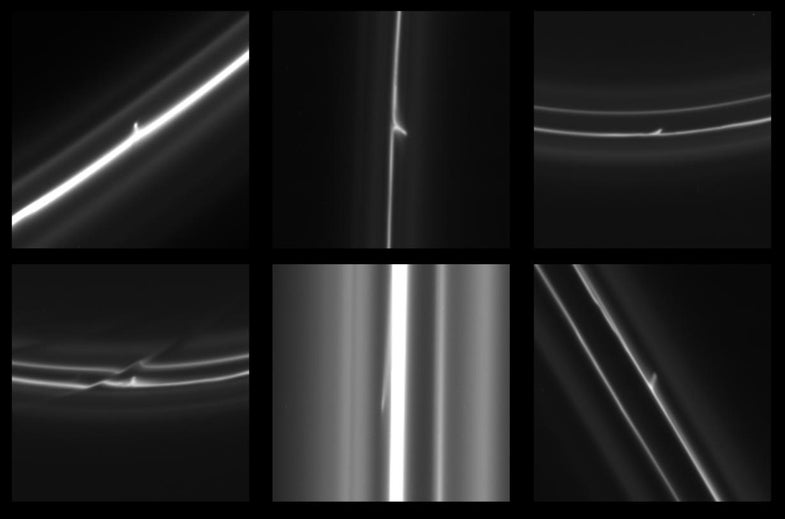 Scientists scrutinizing Cassini imagery have stumbled on a strange find — evidence of half-mile-sized snowballs perforating one of Saturn’s rings, creating miniature contrail-like streams in the ring’s shape. The pictures answer a mysterious question about the F ring, Saturn’s oddest ring.

Unlike some of the wider, stately rings, the narrow F band has lots of dynamic features, including channels, ripples and snowballs formed by the nearby tiny moon Prometheus. Scientists didn’t know what happened to the snowballs after they were created, however, and assumed they were destroyed along the way. These trails paint a more complete picture, proving that some of the snowballs survive to wreak their own havoc on the ring structure. This in turn gives a clearer picture of the little moon’s impacts on Saturn’s rings.

Along with answering an interesting planetary science question, this finding is a feat of image analysis. Cassini has been snapping amazing photos for years now, but often they depict large structures or Art Deco images of moons. To find these F ring disturbances, the imaging team looked through 20,000 images.

“The F ring has a circumference of 550,000 miles, and these mini-jets are so tiny they took quite a bit of time and serendipity to find,” said Nick Attree, a Cassini imaging associate at Queen Mary, University of London.

The images show 500 separate cases where small fragments punch through the F ring, according to researchers at NASA and Queen Mary. The objects drag icy ring particles behind them, creating little distortions and jets in the rings. Check it out below, and watch a narrated view of the images at bottom.