Video: This Morning’s Solar Flare Was the Biggest Seen In Years

It’s been a busy few days on the surface of the sun. A handful of coronal mass ejections (CMEs) last... 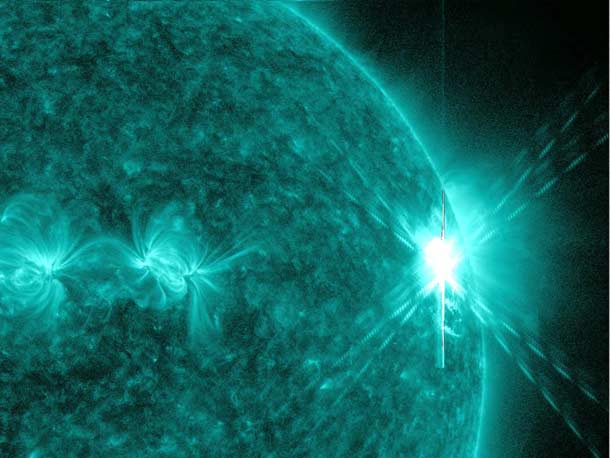 It’s been a busy few days on the surface of the sun. A handful of coronal mass ejections (CMEs) last week sparked concerns of power grid and communications disruptions. And then this morning at 3:48 a.m. EDT, our local star fired off an X6.9 solar flare more powerful than any seen in years.

Captured above and below by NASA’s Solar Dynamics Observatory and measured by the NOAA GOES satellite, this morning’s solar outburst was definitely the strongest of the current sun cycle. It measured X6.9, a full three times stronger than the previous frontrunner of this cycle, an X2.2 measured back in February.

Lucky for us down here here on Earth, this flare wasn’t facing us and therefore isn’t expected to affect the planet in any serious way, though the potential is there (NASA warned that it could cause some radio communications blackouts, but likely nothing worse).

Refresher: the solar flare rating scale works sort of like the Richter scale, but with the added confusion of letters. There are five classes in order of ascending strength: A, B, C, M and X. Class A and Class B are small enough to be inconsequential for our purposes (A-class flares are near background levels of solar activity). Class C covers small flares that don’t really affect earth, M-class denotes medium flares (minimal radio blackout, some danger to astronauts) and X designates the largest. Like the Richter scale, each letter class represents a 10-fold increase in energy output over the class before, and within each letter class there is a finer scale ranging from 1 to 9 for distinction among flares of the same class.

Of course, we can’t put an upper limit on the sun’s power, so X-class flares can go beyond the number 9–far beyond actually. The most powerful ever measured back in 2003 topped out at X28, and that wasn’t even an accurate measurement. That’s simply where the measurement was at the sensors taking the reading were overloaded and stopped working.