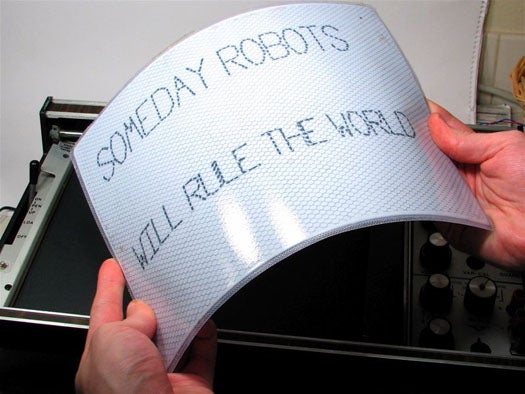 Flexible organic transistors could vastly improve the quality and reduce the cost of flexible displays like e-paper. Windell Oskay via Wikimedia
SHARE

This week at the International Solid-State Circuits Conference (you didn’t forget about the International Solid-State Circuits Conference, did you?) a team of European researchers will unveil a 4,000-transistor, 8-bit logic microprocessor with processing power equivalent to a simple silicon chip circa 1977. But this chip is different. This chip is flexible. The world’s first organic microprocessor is here.

Flexible, organic chips have long been on technology’s to-do list, but coaxing consistency out of organic transistors has been something of a chore. Organic transistors lack the monocrystalline structure of silicon, which makes their behavior somewhat unpredictable–each one can have a slightly different voltage threshold–an undesirable characteristic for a transistor to possess.

The Belgian team at nanotech researcher Imec in Leuven sorted out the problem by building an extra gate in the back of each transistor, a backdoor that allows for better control of the semiconductors electric field, solving the switching problems usually associated with organic chips.

However, the organic microprocessor they’ve built is still not exactly busting through the upper limits of Moore’s Law; as mentioned above, it’s roughly equivalent to a 1970s-era silicon chip, hardly a game changer for the overall chip industry. But it does have its place. The tiny, flexible, 25-micrometer-thick microprocessors could lead to better and cheaper flexible displays and sensors that can be embedded into just about anything, from clothing to construction materials to foods or pharmaceuticals.