Iguanas, Tigers and SUVs – Oh My! 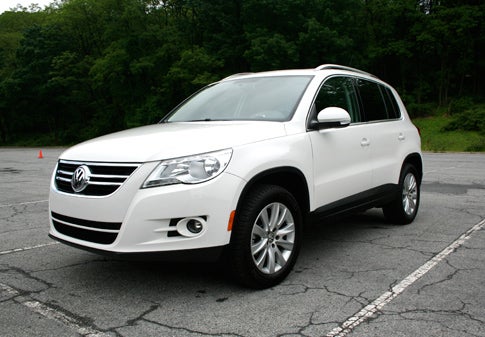 Sometimes car marketers really earn their shrimp cocktail. Saddled with an unfavorable Euros-to-dollars conversion, Volkswagen North America needed a sales hook to take the edge off the slight premium buyers would pay for its German-built 2009 Tiguan. The answer was to hail the new compact model as “The GTI of SUVs.” That tagline implies the Tiguan packs the driving entertainment of the company’s sports hatchback, with extra room for lawn chairs, soccer balls and a 72-pack of Mott’s. The thinking is, mom and dad still have Rocket From the Crypt on their iPods, so why should they give up stoplight burnouts?

It’s brilliant work, really, especially in a field of wide-net clunkers like “You gotta put Mercury on your list” and Saturn’s awkwardly loaded plea to “Rethink American.” VW clearly hopes imparting some performance sparkle by association will pay off in differentiation and sales. And among the V-dub faithful, calling anything “The GTI of…” rivals Proust’s madeleines for sheer cognitive resonance. But how far is VW stretching the relationship?

The Tiguan indeed rides on a similar platform as the GTI, derived from Volkswagen’s flexible Group A modular architecture. It’s the chassis that underpins everything from the Passat to the base Rabbit/Golf, the Jetta, a high-roof MPV version of the Golf sold in Europe, and enough additional models to give Fredrick Winslow Taylor a case of hysterical blindness. 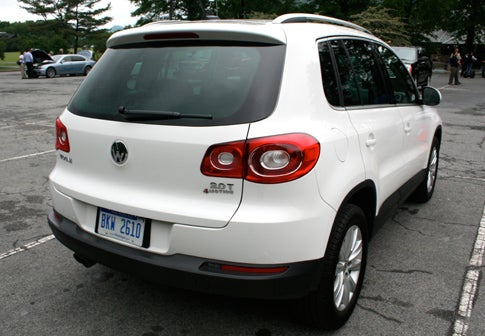 That platform imparts a luxurious sturdiness to the compact Tiguan’s ride quality, which is easily the ute’s best trait. Suspension gear involves a combination of McPherson struts in the front and multilink independents in the rear. The electromechanical steering is crisp, despite the electromech’s characteristic numbness in center position. Responses proved tight and lucid on the meandering secondary roads around New York’s Bear Mountain. If “carlike” weren’t so often taken as a veiled slight, I might even call it that. The whole nut comes together with a throttle stab; the Tiguan, after all, shares a 200-horsepower, 2.0-liter turbocharged four with GTI. It’s a worthy engine, with little discernable turbo lag, roundly praised for making the GTI a star performer. For sure, the Tiguan moves out. But with some extra weight and all-wheel-drive engaged, the results are slightly less dynamic than in the GTI. Imagine Calvin Johnson going out for a pass in hiking boots, with a bag of garden mulch strapped to his back.

Volkswagen isn’t the first compact-SUV maker to play the performance card. Acura took a similar path with its turbocharged RDX, making a play for young, urban professionals with well-worn IKEA cards. The RDX comes with a 240-hp, 2.3-liter turbocharged in-line four and shares Acura’s Super Handling All-Wheel Drive (SH-AWD) with the luxe Honda brand’s upmarket sedans. The RDX is a bit more darty and with the rear seats down offers 60.6 cubic feet of cargo space (or one Poäng chair and a Bestå Enön TV storage unit). The Tiguan is less sprightly but still fun and offers a slightly less commodious 56.1 cubes with the seats prone. Of course, the Acura starts at around 34 grand and can top 40 fully loaded. The Tiguan extends downmarket a bit further, ranging from $23,200 (minus $690 destination charge) for the FWD S model and $32,940 for the SEL with 4Motion all-wheel-drive. Sporting a full list of options, the Tiguan tops out at around 38Gs. 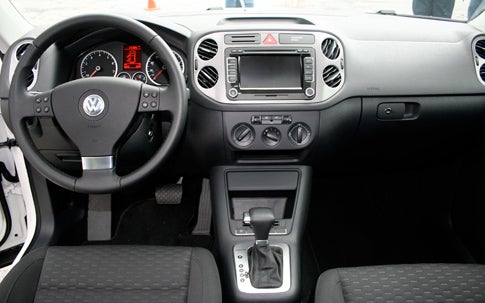 We sampled a loaded S, which included a sweet panoramic sunroof (a $1,300 option). Performance wise, the S, SE and SEL are identical. For now, the three share a single front- or all-wheel-drive powertrain. Hints of V6 and diesel options for the US are still just whispers. Available transmissions include a six-speed manual (on the S) and VW’s refined six-speed Tiptronic automatic (VW’s 4Motion AWD requires an automatic tranny). One GTI feature not available on the Tiguan is the paddle-shifted DSG dual-clutch manumatic. That box might add weight and complexity, but would definitely bring more of the GTI’s point-and-shoot fun.

In sum, the GTI of SUVs? Not exactly. But the Tiguan does carry enough Volkswagen charisma to win the company some slack.

Oh, the name? It’s a made-up portmanteau of “tiger” and “iguana” (actually, “leguan” in German) that readers of a German auto magazine came up with in a contest. Apparently, marketing’s handled by an entirely different crowd over there.