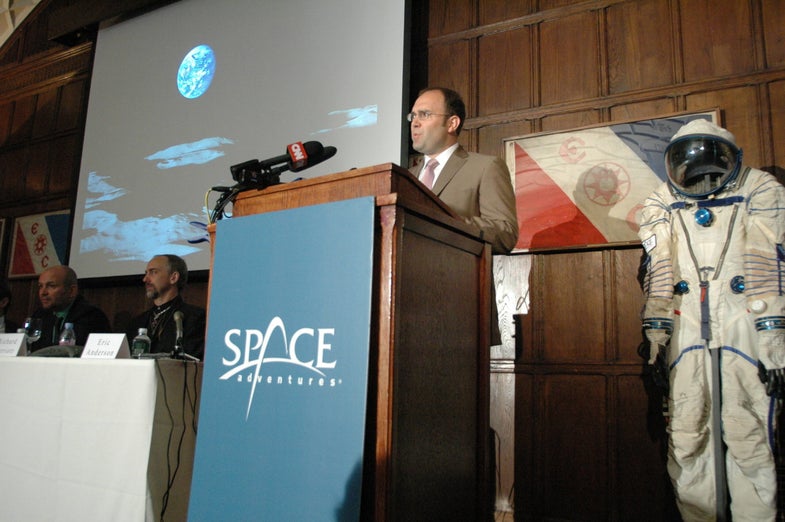 Space Adventures, the broker of the first tourist flights to space celebrated its ten-year anniversary today here at the Explorer’s Club in New York with the announcement that it had scored a deal with the Russian Federal Space Agency, or RKA, to buy an entire flight to the International Space Station.

The first private citizen to buy a ride into space took off on a Space Adventures brokered flight in a Russian Soyuz spaceship to the International Space Station in 2001. That flight, for which California technology entrepreneur Dennis Tito paid $20 million, proved the business case for space tourism, and opened the door to private investment in commercial space travel.

Now Space Adventures has upped the ante by buying not just one seat aboard one of the expendable Soyuz spacecraft that have been the mainstay of the Russian space program since the 1960s, but an entire flight. A professional Russian cosmonaut will command the flight for two ticket-paying passengers some time in late 2011.

From then on, Space Adventures plans to fly one charter flight to the International Space Station a year through the station’s operational life. RKA will add new spaceships to its manifest rather than bumping existing flights, such as those that might have to be used by NASA after the Space Shuttle retires in 2010.

As an indication that the whole idea of commercial spaceflight has not only gained traction in the investment community in the last 10 years, but also that it has acquired general respectability, Anderson left open the possibility that those charter flights might be filled not just by private citizens, but by the astronauts of national governments who can’t get to space any other way.

Not that paying your own way to to the International Space Station is necessarily any less respectable. Next on the Space Adventures passenger list is video game entrepreneur Richard Garriott, who as the son of Skylab and Space Shuttle astronaut Owen Garriott claims fame as America’s first second-generation astronaut. Garriott aims not just to enjoy himself on his $35 million flight, he said at the press conference, but also to conduct experiments for private companies who have at this point paid him several hundred thousand dollars to grow protein crystals in orbit for later analysis on Earth. He’ll also conduct educational programs for school kids.

In line for a Space Adventures flight to the Space Station after Garriott is Google cofounder Sergey Brin, who has already put down a $5 million deposit for the privilege of becoming the first in Space Adventures’ new Orbital Mission Explorers Circle program for reserving a future flight.

What’s next in commercial orbital spaceflight? Look for the first commercial space walks in the not-to-distant future, and, within the next five years, says Anderson, the first private mission to the moon, again flown by the Russian Federal Space Agency and brokered by Space Adventures.

Anderson won’t say how much his company will pay for the charter flights to the Space Station or how much tickets on it will cost, but tickets to fly around the back side of the moon and come back home without landing are set at $100 million each.