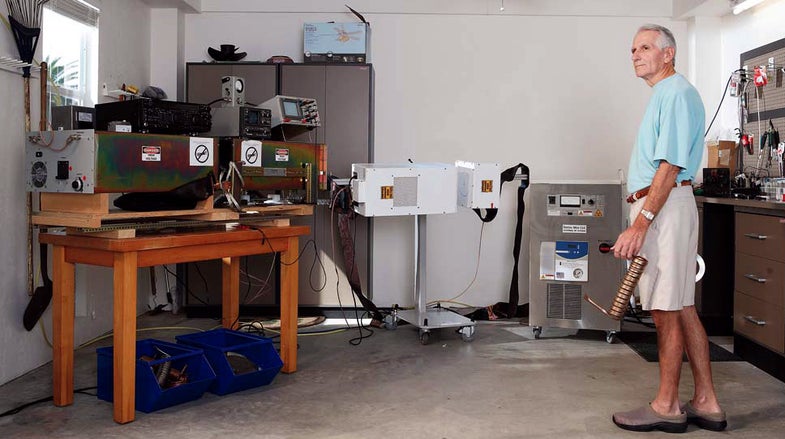 John Kanzius in his garage with different versions of his tumor-cooking RF-field generators. John B. Carnett
SHARE

When a man with no medical degree and a diagnosis of fatal leukemia builds a cancer-curing machine in his garage, you might think it merely the desperate attempt of a dying man to escape his fate. And you’d be right. The weird thing is, it just might work.

John Kanzius was diagnosed with leukemia in the spring of 2002. But it wasn’t until the following year, during a bout of chemo-induced insomnia, that he got the idea for his machine. Disappointed at the blunt forms of treatment available, the lifelong inventor and retired radio-station owner thought maybe he could build something that would target cancer cells more directly. Radio waves generate an electromagnetic field, which, if intense enough, can make the electrons inside a piece of metal move around violently and give off heat. So Kanzius suspected that if you embedded metal particles into a tumor and hit it with the right kind of radio waves, you could heat the tumor enough to kill it.

Researchers have begun human trials with a similar treatment, using infrared light to blast gold nanoshells attached to tumors. But infrared works best on tumors close to the surface, such as those in the throat. Radio waves, which pass straight through human cells, could penetrate much deeper, into lung or liver tumors. But they also radiate in all directions and lose energy as they travel. Kanzius’s challenge was to concentrate high-powered radio waves on a relatively small area to create that high-intensity electromagnetic field.
So he built a high-voltage system that sends intense radio waves through a pair of antennas just inches apart. At the end of both antennas are seven-inch copper coils precisely tuned to resonate at the same frequency (13.56 megahertz, the frequency typically used for medical applications). This “resonant coupling” confines the radio waves into a narrow beam between the antennas, creating a super-strong electromagnetic field between them. The electromagnetic energy takes the path of least resistance—the metal—and heats the tumor. The metal-free tissue around it remains unscathed.

By the end of 2003, Kanzius was injecting hot dogs with copper sulfate and putting them in his device. When he examined the hot dog, only the meat around the copper sulfate was cooked. (The machine also, strangely, turned saltwater flammable, a phenomenon we wrote about in Headlines, December 2007.) But of course, frying hot dogs was a long way from curing cancer. To make the machine more precise, Kanzius needed even smaller particles and real cancer cells—and help from someone who knew more about both. In 2004, he filed for a patent and started circulating the idea among friends and doctors. He quickly drew the attention of some renowned scientists, including David Geller, the co-director of the Liver Cancer Center at the University of Pittsburgh Medical Center, and Steven Curley, a professor of surgical oncology at Houston’s M.D. Anderson Cancer Center and a colleague of Kanzius’s personal physician. Curley, an early pioneer of a cancer treatment that sends a low-frequency current through electrodes to destroy tumors directly, was impressed by

Kanzius’s radio-frequency generator. “What John has done,” Curley says, “is found a way to produce a radio-frequency field so intense and so focused, it’s achieving heating rates that have never before been described.”

For the next few years, Kanzius worked with Curley’s and Geller’s teams to fine-tune the intensity of the radio-wave field to improve its effectiveness with the new particles. Last December, the first peer-reviewed paper on animal trials of the therapy appeared in the American Cancer Society’s journal, Cancer. Curley’s group injected carbon nanotubes into liver tumors in rabbits and zapped them with Kanzius’s machine, killing the tumors and leaving the rabbits healthy. Geller’s team achieved similar results in rodents using gold particles; that study will be published in August. The next step is getting the nanoparticles, once injected into the body, to find and enter only the cancer cells. Human trials could be just a few years away.

“The applications will be profound,” predicts surgical oncologist Raphael Pollock, the editor in chief of Cancer. “The method could be easily expanded to look at a variety of cancers.”

“People always ask me if I ever treat myself,” says Kanzius, who is still fighting leukemia. “No. I wrote the patents—I know it won’t work without that targeting particle. If it did, I’d be sitting in front of that thing every day.”