Balloons Are The Future of Space Tourism

See the curvature of earth with a drink in hand 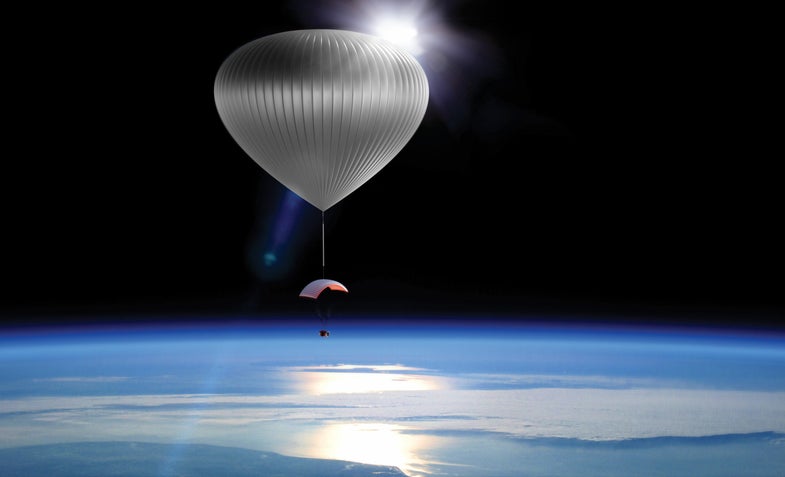 A few months ago, I found myself backstage with Bobak Ferdowsi. If you recall the landing of the Curiosity rover on Mars, then you probably remember him. Ferdowsi is a systems engineer at NASA’s Jet Propulsion Laboratory, and because he happened to sit near the TV cameras—and because he wears a pretty serious mohawk—he unintentionally became the face of the most successful space mission in decades. President Obama dubbed him the “Mohawk Guy,” and then invited him to take part in his inauguration parade.

Ferdowsi and I had agreed to speak at the Pioneers Festival—a startup gathering in Europe—on the topic of private space. While we chatted backstage, I lamented that it had been almost eight years since the first of Virgin Galactic’s many promised space-tourism launches. “And we’re still waiting,” I said.

Ferdowsi nodded his head. The stars can seem out of reach, he said. “But I still see tourism as one of the greatest near-term opportunities in private space.” Then he began to tell me about balloons.

For most of us, the dream of getting to space typically involves rockets. And by and large, that’s a correct assumption. To truly escape Earth’s atmosphere requires tremendous power (along with a healthy dose of strain, suffering, and corporeal risk).

Balloons offer a pretty compelling alternative. As we discuss in our August 2015 cover story, they are a proven technology: Scientists have used them for years, and this past October, Google executive Alan Eustace rode one to 135,890 feet without incident. Balloons are also more affordable than rockets, and they are altogether more pleasant: a gentle ride up and a gentle ride down. There are no G-forces to contend with and no pressure suits to squeeze into.

Passengers will find themselves nearly 20 miles up, drink in hand, staring out at the curvature of Earth.

Three high-altitude balloon startups have formed and are already pre-selling tickets for future flights. As imagined, the ride will entail sailing for a few hours at 100,000 feet in a pressurized capsule. At least one company plans to offer bar service because, why not?

As with anything, this type of tourism will come with a few strings attached. Rides will not be cheap: between $75K and $125K. And technically they won’t reach space. Close readers know that 100,000 feet is still well within the stratosphere; the boundary to space is about 330,000 feet. But passengers will still find themselves nearly 20 miles up, drink in hand, staring out at the curvature of Earth. So there’s that. And then this: The first trips might launch as soon as 2017. Better start saving now.

This article was originally published in the August 2015 issue of Popular Science, under the title “The Stars Within Reach.”