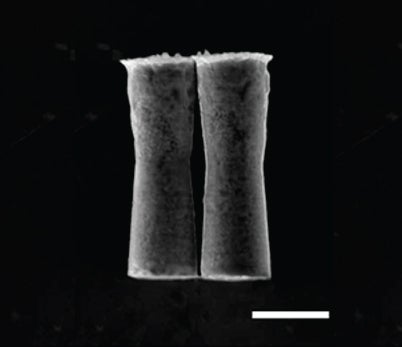 Last year, in a lab in sunny San Diego, researchers fed a dozen mice a small drop each of a very special liquid. Inside the drops, invisible to the naked eye, were thousands of tube-shaped, microscopic motors. The motors made their way to the mice’s stomachs, embedded in their stomach linings, and released their tiny payloads: nano-size flakes of gold. The research represented a major step toward putting microbots to work in human medicine, where they could one day ferry drugs efficiently into specific organs or even specific cells.

Strange as such research may sound, it’s actually been going on for about a decade. A number of research teams around the world have worked on making engines, many of them a fraction of the width of a human hair, that are able to move around in blood, bodily fluids, and other interesting liquids. The objects are all prototypes, steps toward a more ambitious idea: That in the future, engineers could make fleets of tiny, programmable motors to perform tasks such as killing individual cancer cells or cleaning up molecules in an oil spill.

The research is still in its early stages. Other research teams have only tested their motors in solutions they’ve mixed up in lab, or in cells they’ve grown in Petri dishes. The University of California, San Diego, study is the first to try such motors in animals.

Six hours after getting their drops, the UCSD mice didn’t seem to have any damage in their stomach linings, showing that it could be safe for animals to ingest micro-motors. In addition, the UCSD researchers found more gold flakes stayed in the mice’s stomach walls when they swallowed motors than when they swallowed the gold nanoparticles by themselves. That shows moving motors could be an improved way of getting medicines to stick to bodily tissues, compared to drug molecules, which flow through the body more passively.

So how do micro-motors work? They’re not exactly like your average car or lawnmower. Their size and the watery conditions they work in aren’t conducive to internal combustion. Instead, many depend on chemistry on their surfaces to propel them along. In the case of the UCSD motors, contact with acids, like those found in the digestive system, moves them around. The motors are made of zinc, which reacts with gastric acid to make propulsive hydrogen bubbles. Videos researchers recorded of their motors showed them zooming around with a puffy trail of bubbles behind them. They move at 60 micrometers a second, or about an inch every seven minutes. 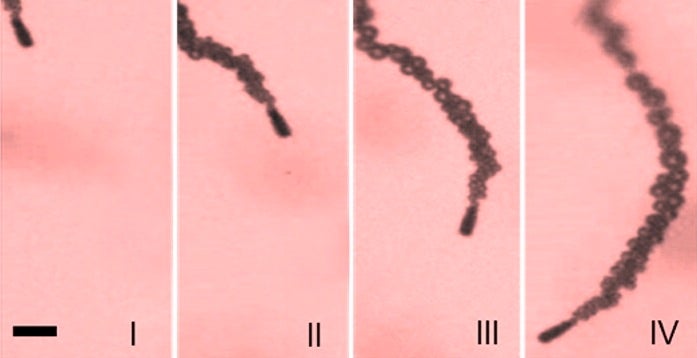 Micro-Motor with a Bubble Trail

Photos of a zooming micro-motor, each taken one second apart. The black bar in the first picture represents 20 micrometers.

The UCSD motors are designed to eventually dissolve in stomach acid, so doctors don’t have to worry about removing them from the body after they’ve done their job. The chemicals they create when they dissolve—mostly a plastic, plus zinc, an essential mineral—are supposed to be safe for the body, although their safety would have to be tested much, much more before they would show up in a drug.

The team, led by nanoengineer Joseph Wang at UCSD, published their work in December in the journal ACS Nano.