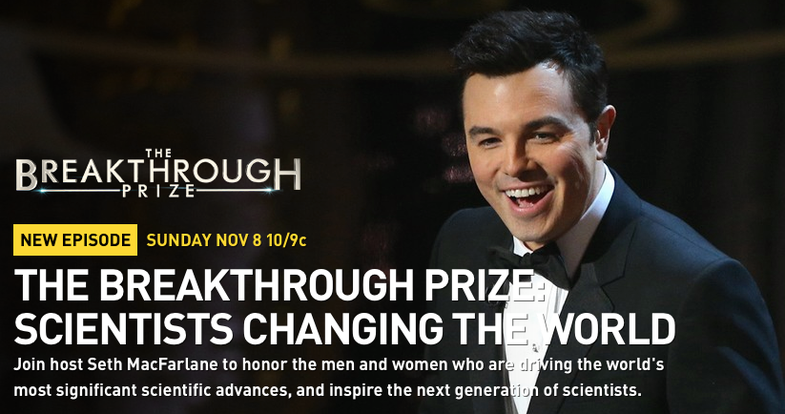 Think fast: what would you do for $3 million? If you need some inspiration, tune in to the National Geographic Channel tonight — Sunday, November 8 at 10 p.m. ET— to catch the third annual Breakthrough Prize ceremony, live from Silicon Valley. As the event unspools with a glittery assist from host Seth MacFarlane (creator of Family Guy and executive producer of Cosmos) and musical guest Pharrell Williams, seven individuals or teams are set to receive $3 million each for their cutting edge work in three categories: life sciences, math, and fundamental physics.

This year’s Breakthrough Prize is also notable for adding a new category: the Breakthrough Junior Challenge for students, which awards $400,000 for the best science or math-themed video (with $250,000 of that going to the student directly in the form of “educational prizes,” $50,000 to their teacher, and $100,000 to create a new science lab for their school). In addition, this year’s Breakthrough Prize includes eight New Horizons awards of $100,000 each. In total, the evening will see just under $22 million in prize money handed out.

Aside from providing innovators with some cold cash to kickstart their work into the future, the Breakthrough Prize Foundation is purpose-built by some of Silicon Valley’s biggest tycoons (among them, Facebook’s Mark Zuckerberg, Google’s Sergey Brin, 23andMe’s Anne Wojcicki, and Russian investor Yuri Milner), to create a high profile publicity splash aimed at honoring recent advances the better humanity, and encouraging more youngsters to say “scientist!” when asked what they want to be when they grow up.

At $3 million a pop, the Breakthrough Prize dwarfs the better-known Nobel Prize in terms of its cash prize, and adds the extra sizzle of a Hollywood-style awards ceremony on top.

“The Breakthrough Prize honors achievements in science and math so we can encourage more pioneering research and celebrate scientists as the heroes they truly are,” explains Mark Zuckerberg, one of the Silicon Valley A-listers behind the prize.

Karl Deisseroth of Stanford University and Ed Boyden of MIT, for creating optogenetics, a pathway to treating Parkinson’s and other neurological disorders by using light signals to control brain activity (Boyden was a member of Deisseroth’s lab at Stanford before going to MIT).

Helen Hobbs of the University of Texas Southwestern Medical Center, for genetic insights into the failure of cholesterol-clearing mechanisms in the human body, leading to new strategies for preventing cardiovascular and liver disease.

John Hardy of University College, London, for discovering the genetic mutations in the protein “plaque” that builds up in the brains of early onset Alzheimer’s victims.

Svante Pääbo, Director of the Max Planck Institute for Evolutionary Anthropology and founder of the field of paleogenetics, for work on ancient DNA and genomes that lift the veil on our connection with Neanderthals and other long-lost relatives.

Ian Agol of the University of California — Berkeley, for completing the last steps of a “big problem” challenge that began in 1982 covering the entire field of topology, the mathematics of shape transformation.

More than 1,300 scientists with share this prize, for participating in a decades-long international collaboration to expose the mystery behind neutrinos, the common but invisible particle that fall upon all existence like a “ghostly rain.”

Seven team leaders will accept the award on behalf of all 1,300-plus collaborators. They are: Takaaki Kajita and Yoichiro Suzuki, for the Super-Kamiokande team; Yifang Wang and Kam-Biu Luk on behalf of the Daya Bay team; Koichiro Nishikawa on behalf of the K2K and T2K teams; Arthur B. McDonald on behalf of the SNO team; and Atsuto Suzuki for the KAMLand team. Kajita and McDonald were also winners of this year’s Nobel Prize in Physics for their same neutrino research.

In addition to the seven main awards, the Breakthrough Prize includes five New Horizons awards of $100,000 for individual scientists and teams in the early stages of their careers, broken down this year into Physics and Math.

B. Andrei Bernevig of Princeton University, Liang Fu of MIT and Xiao-Liang Qi of Stanford University, for contributions to condensed matter physics.

Raphael Flauger of the University of Texas at Austin and Leonardo Senatore, Stanford University, for contributions to theoretical cosmology.

Yuji Tachikawa of the University of Tokyo, for studies of supersymmetric quantum field theories.

Larry Guth of MIT, for solutions to long standing problems in symplectic geometry and other fields.

André Arroja Neves of Imperial College London, for co-solving (with Codá Marques) the 50-year-old Willmore Conjecture, among other contributions.

(A third New Horizons in Mathematics Prize was offered to, but declined by, Peter Scholze of Bonn University.)

Chester’s video, “Some Cool Ways of Looking at the Special Theory of Relativity,” garnered prizes totaling $400,000 earmarked for the 18-year-old’s education, teacher, and school.

Too busy working on your own breakthrough to watch tonight’s award ceremony? You can catch a one-hour condensed version to be aired on Fox and National Geographic channels on November 29 — details here.