Why Dunes Sometimes ‘Burp’ And ‘Boom’ 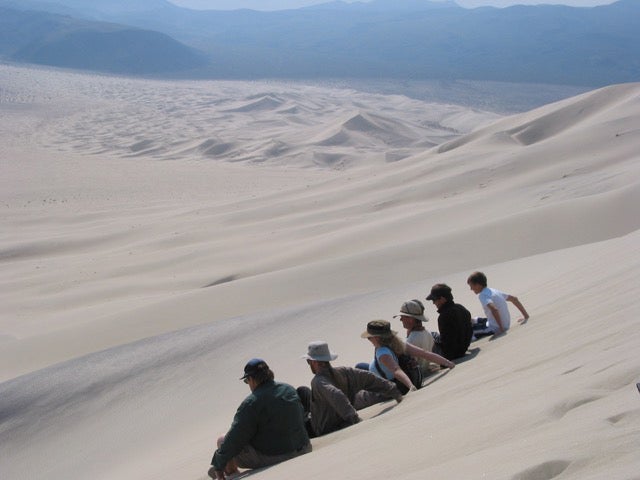 During hot and dry weather, large sand dunes come alive with the sound of burping. And booming, for that matter. For centuries, people have overheard sand dunes ‘singing’ in a deep, booming, hum. Researchers knew that the sound was triggered by avalanches of sand, and that different notes were the result of different sized grains bumping into each other. But until recently, researchers were still mystified by how one sand dune could produce different noises.

In addition to long, almost musical booms, dunes are sometimes recorded as giving off shorter sounds, sometimes described as burps.

In a study published today in Physics of Fluids, researchers discovered that the difference between the two noises (booms and burps) had to do with how sound waves moved through the sand. When a ‘burp’ noise was recorded, the scientists found that the sound waves had a low frequency, a slower velocity, and traveled mostly along the surface of the dune. With a booming noise, the sound waves were higher frequency, traveled faster, and were reflected off the inner layers of the dune.

The team even managed to ring a dune like a gong, triggering the booming sound by hitting a plate on the dune’s surface with a hammer. This is the first time that particular phenomena has been recorded, although many scientists have triggered the noise by creating sand avalanches. Listen for yourself to the National Park Service recording below.

The difference between the two noises is interesting to physicists, but also to people studying oil or earthquakes. Researchers often use sound waves to map layers of sediment deep under the soil or ocean floor. Knowing how sound waves react with smaller particles, like sand, can help scientists get a better picture of what’s going on inside our planet, whether it’s looking at how sound waves reflect from hidden oil reserves, or how seismic waves in an earthquake travel through the Earth’s crust.