Yes, it really does help 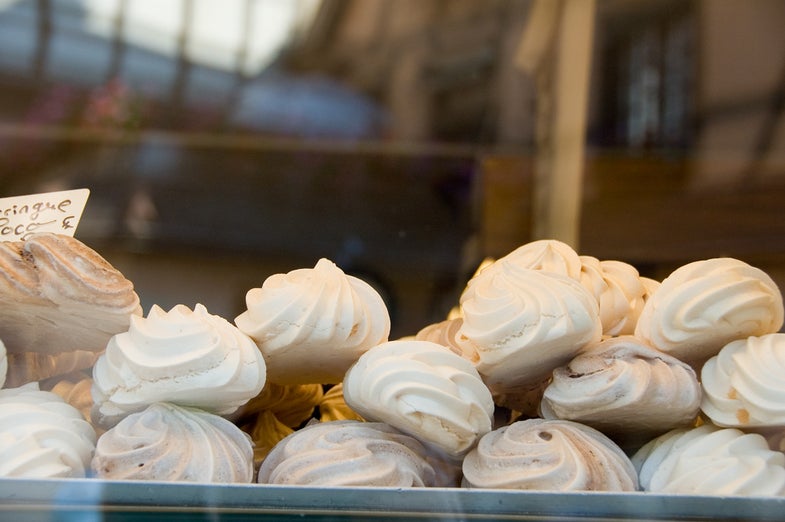 If you’ve never whipped egg whites before—don’t. It’s a real pain, and honestly, you can just buy baked meringues. But if you insist on doing it from scratch, at least whip ’em in a copper bowl. Sure, you can only really use this cookware for one thing, but at least you’ll be able to show off your fancy bowl. Now pair it with some scientific knowledge.

Egg whites are chock full of proteins. This is why some people insist on eating just the whites in their omelettes, even though that’s clearly the least tasty part of the egg. Instead of using them in bland breakfasts, you can fluff plain egg whites into tasty meringues. These simple baked desserts contain egg whites that have been whipped into a stiff foam, plus a bit of sugar and (optionally) some flavoring. Not only are meringues delicious, but everyone will be very impressed when you can make them. You can also use incredible, edible egg whites to add volume and airiness to certain baked goods, such as soufflés. This comes in handy if want to make a gluten-free dessert (or you’re avoiding leavening for Passover).

The only problem with whipping egg whites is that it’s annoying. Really annoying. It takes quite a long time, especially if you’re doing it by hand, and it’s easy to overbeat them. Then, even if you get them to the perfect consistency, the fluffy whites will start to droop and leak moisture the second you stop beating.

The magic (or rather, the science) of the copper bowl is that it removes these annoyances.

Let’s take a quick step back. When you whip eggs whites, what you’re really doing is rearranging those proteins and incorporating air bubbles into the new structure. And specifically, you’re rearranging them in an irreversible (except by very complex chemistry) process called denaturing. It’s essentially the same thing that happens when you cook an egg—rearranging the amino acid structure—except that the different mechanisms produce different results. (In other words, don’t try to cook an egg by beating it.)

As you denature the proteins, though, the amino acids that make them up start to form new bonds with each other. This is how denaturing works—you want some types of bonds to form. But what you don’t want are disulfide bonds. These little devils form between two sulfur atoms and are very tight, so tight that if enough of them form, they’ll start squeezing water out of the egg whites and make your fluffy whipped whites start leaking.

That’s where the copper bowl comes in. The metal chemically prevents those disulfide bonds from forming, so you’ll get very little leakage—even if you have to let your foam sit for a minute while you fiddle with the baking sheets.

The only downside to the metal bowl is that the whipping process may take a bit longer, because disulfide bonds help structure to form quickly. Don’t worry, though—it’s worth it to get gorgeous, glossy whipped whites that don’t sag immediately upon creation. If you can’t afford a copper bowl, try adding a bit of cream of tartar to your egg white mix. The acid will combat disulfide bonds, just not as efficiently (or as beautifully) as copper will. Whatever your method, here’s a quick step-by-step process to guide you through.

For this process, it’s best to use fresh eggs, since the proteins are most conducive to forming an airy, porous foam when they’re new. Pull your eggs out of the fridge and separate out the yolks, using whatever method you’re most comfortable with. It’s cheapest to simply pour the yolk back and forth between the shell halves until you’ve separated out the whites, but if you’d rather use a separator, then go for it!

While you’re working, remember not to crack the eggs directly over the bowl where you’re keeping your whites: If you accidentally drop in some yolk, the fat will prevent the egg whites from foaming up. To avoid this, separate yolks from whites over a secondary bowl, which you can empty into the larger bowl once you’ve ensured there’s no yolk leakage. For the same reason, you should avoid dipping your fingers into the egg whites (your skin contains oils), and you should meticulously clean all of the bowls, whisks, and other equipment that the whites will touch.

The ideal temperature of the egg whites will depend on what you’re doing with them. If you plan to use them in baked goods, let the egg whites reach room temperature before you start beating them. This will let them fluff up faster. Unlike with baking, meringues form best when cold, because the chill helps to maintain their structure. So meringue chefs should start whipping the egg whites before they have time to warm up.

Once you have a bowl of just whites in your lovely copper bowl, start whipping! An electric mixer is highly recommended, but whisking by hand (bonus points for using a copper whisk!) will eventually get you there as well—plus you’ll get a nice arm workout.

If you’re doing it by hand, keep your wrist straight and use your upper arm to move the whisk through the whites forcefully, so you mix as much air as possible into the whites. Different recipes will suggest that you add ingredients during different stages of the mixing process. Meringue recipes, for example, call for chefs to add sugar gradually while they continue beating the whites. Just follow your recipe, and you should be fine.

When the foam flops over gently as you lift the whisk out, you’ve reached the soft peak stage. It shouldn’t take too much longer than that to get to stiff peaks, when the whites will form points. AS SOON AS YOU SEE STIFF PEAKS, STOP BEATING. If you overbeat the mixture now, you’ll never be able to get back to this step, and you’ll have to begin all over again.

Once you have stiff peaks, work as quickly as you can to dollop, pipe, fold in, or otherwise manipulate your egg whites. Again, follow your recipe’s instructions. The copper bowl will help prevent leakage, but your treats will still turn out best when they’ve been baked immediately after whipping.

Pop those bad boys in the oven and monitor closely, especially if you’re baking the whites as meringue, so that you don’t over-brown. Enjoy!