Bacterial Wind Turbines Could Power The Nanobots Of The Future 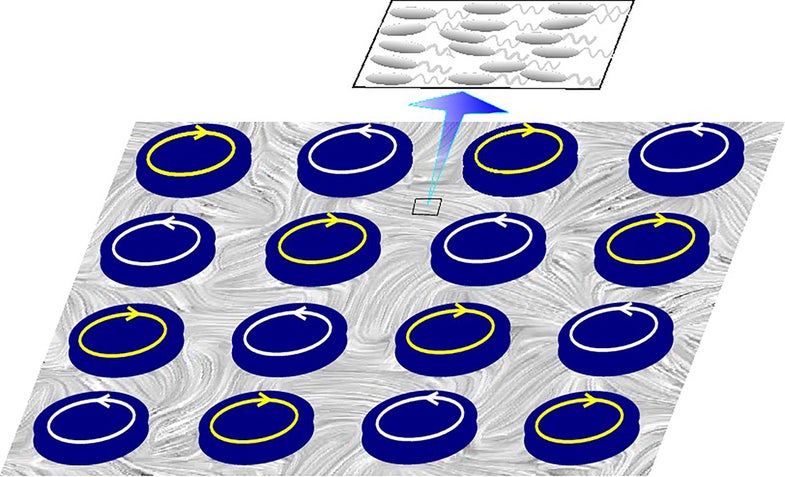 Wind farms are getting bigger and bigger, producing more and more power as they grow. But sometimes, bigger isn’t always better.

In a paper published in Science Advances researchers describe a mathematical simulation of a bacterial ‘wind farm’ that could one day lead to tiny power generation functions in micromachines.

The idea is that one day, researchers can place a network of rotors in a fluid with plenty of bacteria suspended in it. The movement of the bacteria turns the rotors just like wind moves turbines at a wind farm, and the movement of the rotors can then (at least in theory) provide a consistent, reliable power to a new generation of nanotechnology.

The researchers came up with a computer simulation that showed how a lattice of 64 two-dimensional circular rotors would behave in a liquid loaded with moving bacteria. They found that the motion of the bacteria in the solution should cause neighboring rotors to spin in opposite directions, in a pattern that mimicked the movement of turbines at wind farms.

“The amazing thing is that we didn’t have to pre-design microscopic gear-shaped turbines. The rotors just self-assembled into a sort of bacterial windfarm.” Tyler Shedruk, co-author of the paper said. “When we did the simulation with a single rotor in the bacterial turbulence, it just got kicked around randomly. But when we put an array of rotors in the living fluid, they suddenly formed a regular pattern, with neighbouring rotors spinning in opposite directions.”

The lattice of rotors hasn’t been built yet, but the numerical models suggest that the design might be a way forward for engineers and researchers looking to create tiny engines for micromachines, like ones that can move tiny particles, or machines using tiny nanogears. Who knows? Small might be the new big.