4 New Technologies That Will Carry The Weight Of War

Soldiers today lug about 55 percent of their body weight into combat, but these tools could ease the burden. 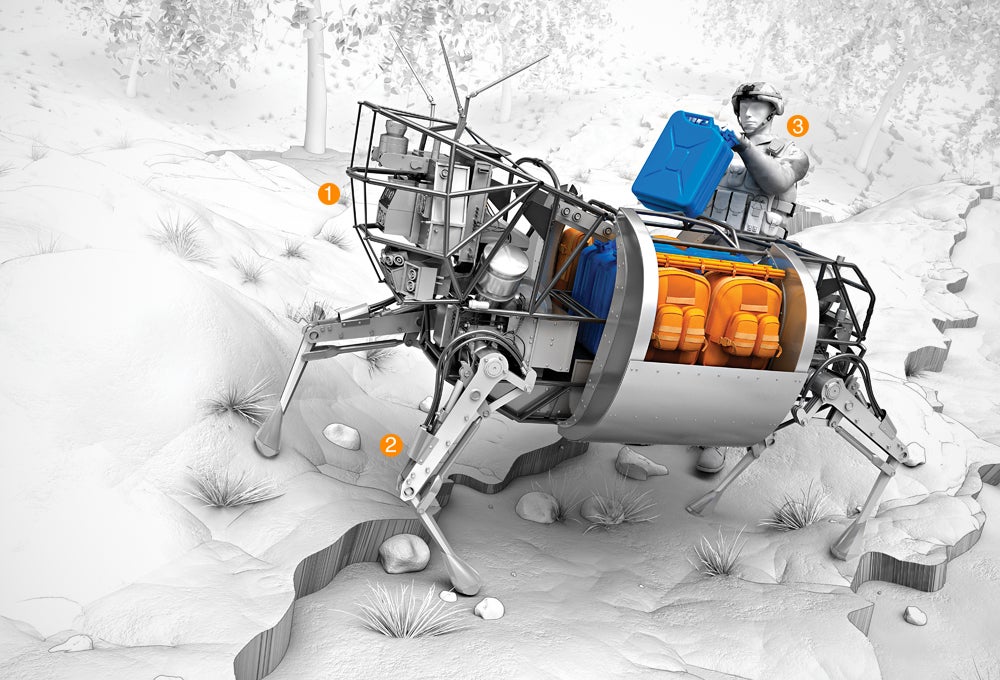 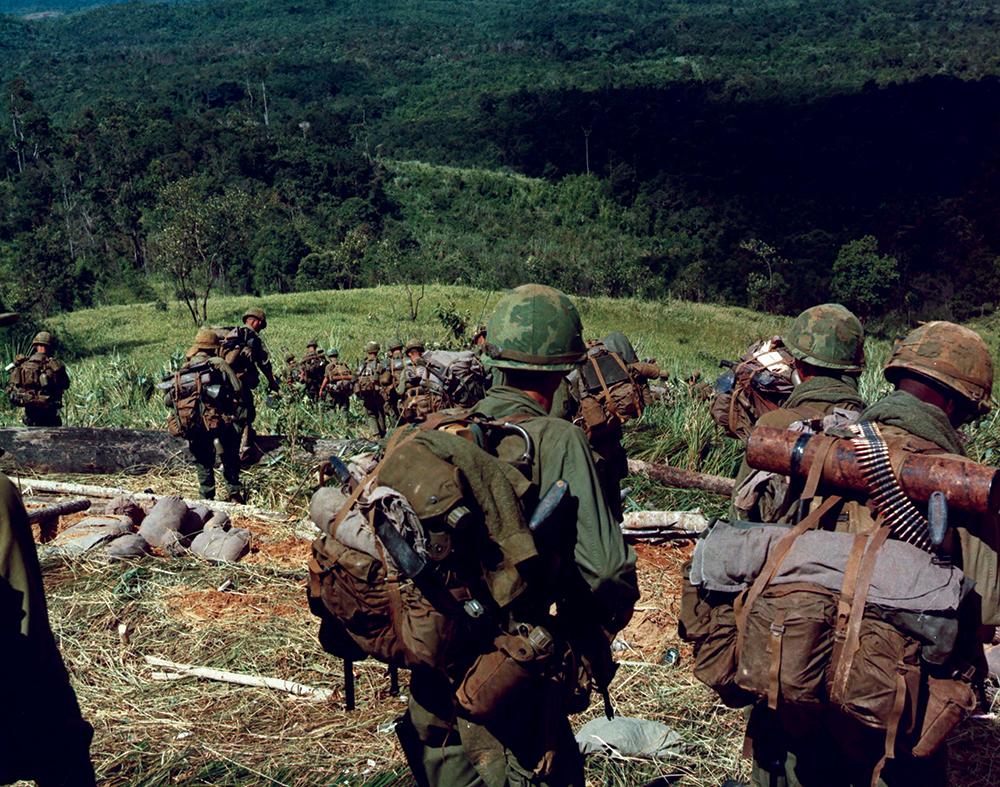 Shortly after iron swords and spearheads became common, soldiers in sixth-century Greece ran into a problem. Infantrymen carted around breastplates, helmets, bronze-lined wooden shields, and iron-tipped spears—as much as 70 pounds of extra weight. The loads were so intolerable that soldiers routinely abandoned them on the battlefield. The famous Spartan phrase “Come back with your shield or upon it” was not meant to inspire valor. It was a directive to stop troops from ditching essential equipment.

Since then, machine guns have replaced heavy javelins, but the weight soldiers carry into war has remained stubbornly consistent: Today, as in Roman times, the average foot soldier lugs about 55 percent of his bodyweight into combat. And though Kevlar is much lighter than bronze, new field tools such as radios, night vision goggles, and all the batteries necessary to power modern war have offset any lightening of loads.

That’s a significant issue. “The ability to move is directly related to the ability to survive,” says Lee Mastroianni, program manager at the Office of Naval Research. During the D-Day invasion of Normandy in World War II, for example, many U.S. Army soldiers drowned while attempting to wade ashore with 90 pounds of gear. Today, musculoskeletal injuries to the knee and back prompt twice as many medical evacuations from Iraq and Afghanistan as combat injuries, and they’re the number one reason for medical discharge from the U.S. military.

But new technology is now driving in-the-field solutions, helping scientists develop new ways to lighten troops’ burdens. Some shave away existing weight. Others, such as a real-life Iron Man suit or a robot mule, shoulder the load. But all of them will change how soldiers fight, making the terrible business of war just a little more bearable.

Click through the images below to explore emerging technologies that will help carry soldiers’ burdens.

This article orginally appeared in the November 2014 issue of Popular Science under the title, “The Weight Of War.” 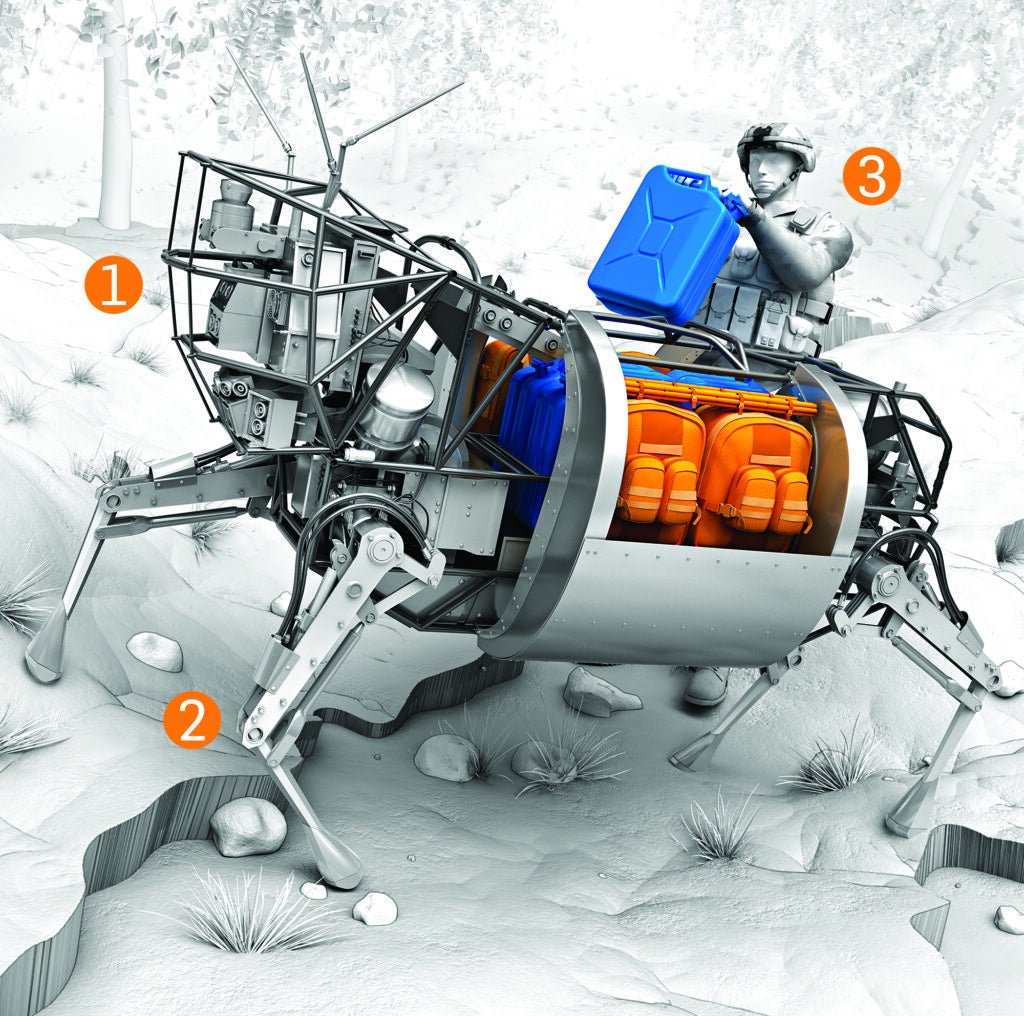 This mechanical beast of burden combines the endurance of baggage mules with the speed and obedience of war dogs. Developed by the robotics company Boston Dynamics, which Google acquired last year, the Legged Squad Support System (LS3) can carry more than 400 pounds, obey voice commands, and provide 500 watts of continuous power to recharge mobile devices. In early trials, the LS3 has proven agile enough to navigate rough terrain even while following a squad of Marines. It can move at more than 9 miles per hour—2 miles per hour faster than the pace of a Marine’s forced march. “We need a platform that has the ability to go where dismounted squads can go,” said DARPA’s Hitt. “So we built a system that has the smarts of a trained animal.” The next-generation prototype will replace the LS3’s gasoline and diesel engines with a hybrid-electric motor that’s quieter than human footsteps. The only hitch is that soldiers will have to wait about a decade before they get a 1,400-pound best friend of their own. How It Works 1. The LS3 has stero, color, and infrared cameras which allow it to detect obstacles, create 3-D maps of terrain, and follow patrols. 2. Each of the four articulated legs use hydraulic actuators to power the joints. A control system enables the robot to maintain balance and ground contact. 3. Voice recognition allows troops to directly operate the robot. The mule’s gait ranges from a one-mile-per-hour walk to a seven-mile-per-hour run. 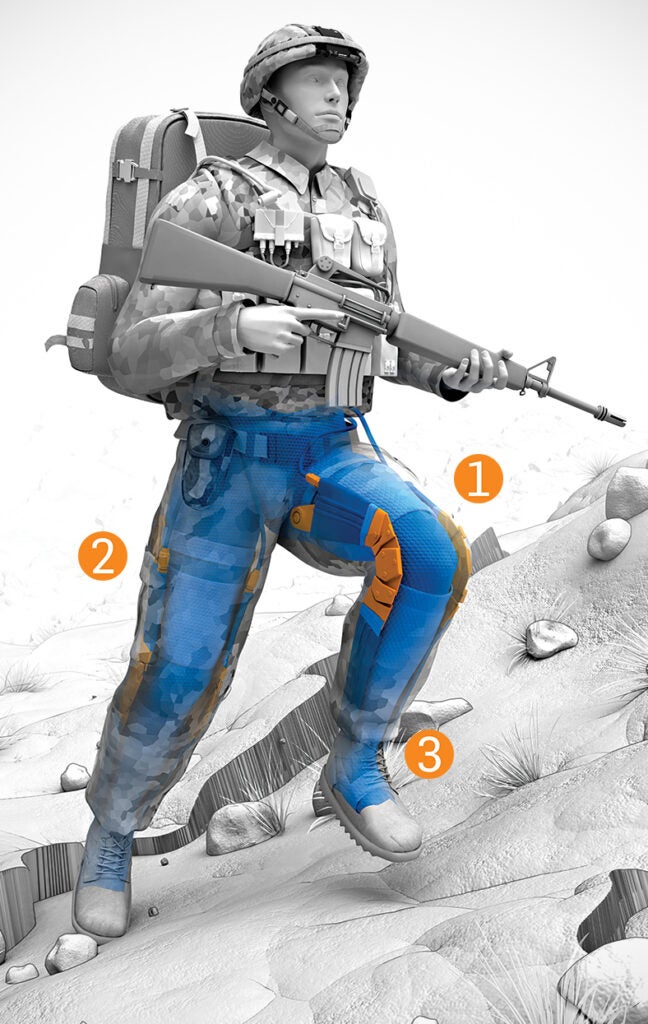 There is some weight troops will never be able to shed. That’s why DARPA has created Warrior Web, a soft, supportive undersuit for the lower body. With a system of spring and rubber bands, the suit stores a soldier’s own kinetic power (from walking or running) and then releases it, lowering metabolic energy use. By augmenting existing leg muscles, the suit could reduce the exertion of carrying combat loads by 25 percent, says Lt. Colonel Joe Hitt, program manager at DARPA—possibly even enabling soldiers to run a four-minute mile. Warrior Web also helps prevent injury by stabilizing and reducing stresses on the ankle, knee, and hip joints. Though the suit adds 20 pounds, it more than compensates for the extra weight with just 100 watts of battery power, roughly twice that of a laptop. Early prototypes can be worn comfortably beneath a soldier’s regular uniform and body armor; a final version is slated for 2016. “The difference moving forward in the next generation of technologies is not just about lightening the load, but also about enhancing human performance,” says Peter Singer, a defense expert at the New America Foundation and author of the book Wired for War: The Robotics Revolution and Conflict in the 21st Century. Some of these high-tech solutions aim to boost human power even more dramatically than the Warrior Web. Another suit currently being developed by U.S. Special Operations Command (SOCOM) resembles Iron Man’s mechanical outerware—and even shares the same pedigree. SOCOM actually hired Legacy Effects, the Hollywood shop that designed the movie’s exoskeleton, to help build it. Called a Tactical Assault Light Operator Suit (TALOS), the robotic full-body armor essentially turns troops into walking tanks, with full-body, computerized armor that might provide intelligence and even medical care. But the suit currently weighs almost 200 pounds and requires an 80 or 90 pound backpack generator to power it. “We don’t want to add perceived weight to the operator,” said Michael Fieldson, program manager for TALOS at SOCOM, so his team has made strides on a new engine-powered prototype. “We’ve gone from a law of physics problem to an engineering problem,” he says. If all goes well, SOCOM expects a final version of the suit as early as 2018. How It Works 1. The Warrior Web suit conforms to the lower body and supports the hip, knee, and ankle joints. 2. Motors, mounted at the waist and attached by cables to joints, transmit force at key moments in the walking cycle, augmenting muscle strength. 3. The suit is made of nylon in places where force is applied, and spandex where it needs to be flexible. A new type of soft sensor monitors motion so that the suit works smoothely. 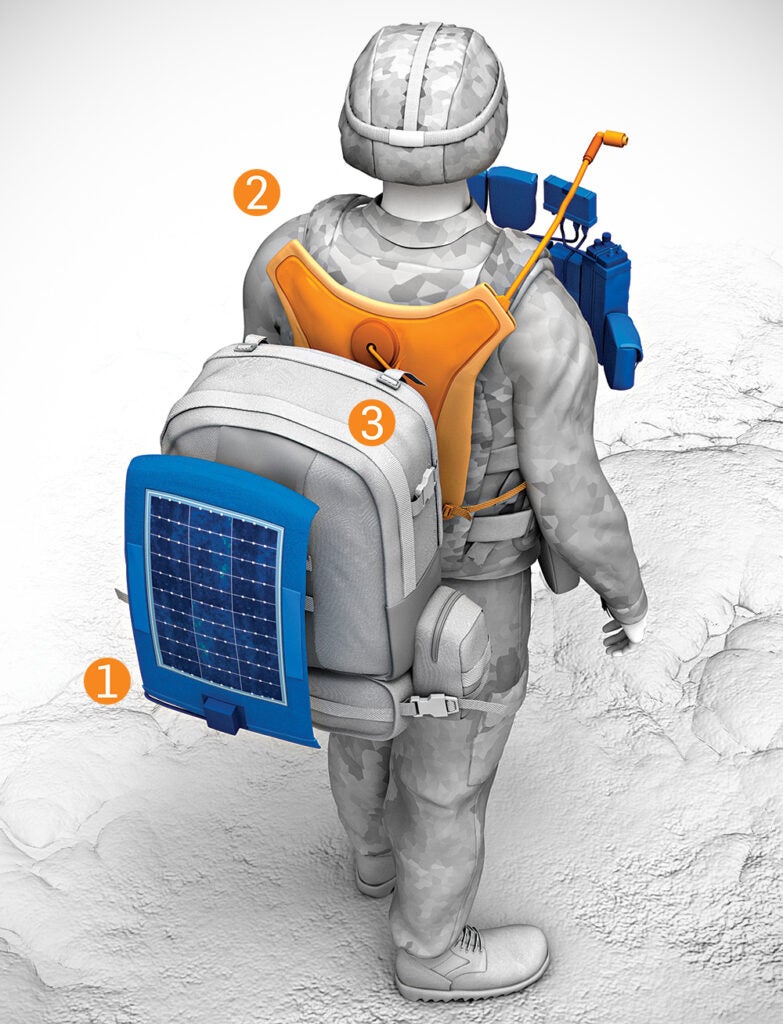 The tools of modern warfare draw a lot of power. Even on short missions, the batteries alone for night-vision goggles, radios, laptops, and GPS devices add between 15 and 20 pounds to a soldier’s load. The Marine Austere Patrolling System (MAPS), developed by the Office of Naval Research (ONR), could replace that burden with a five-pound vest. A flexible solar panel built into the back of the vest converts sunlight to electricity with 30 percent efficiency—a 22 percent improvement over the stationary panels now in use by the military. In addition to charging devices, MAPS can transfer electricity from a fully powered device to a dead one and it contains a membrane water-filtration system, so Marines can produce clean water from almost any source. Perhaps just as important, field tests in 2013 revealed that MAPS gives Marines the confidence to resist dragging extraneous equipment around. With their lives on the line, soldiers often over-pack, says Marine Capt. Frank Furman, an ONR program manager for logistics. So new technologies can’t just replace old ones, he says. “It’s also about replacing the psychological security blanket.” MAPS should see widespread deployment in about five years. How It Works 1. MAPS uses a flexible solar panel to charge flat-form batteries with 30- percent efficiency. 2. A power manager provides a universal interface for automatically adapting devices like radio, GPS, and laptop computers. 3. Voice recognition allows troops to directly operate the robot. The mule’s gait ranges from a one-mile-per-hour walk to a seven-mile-per-hour run. 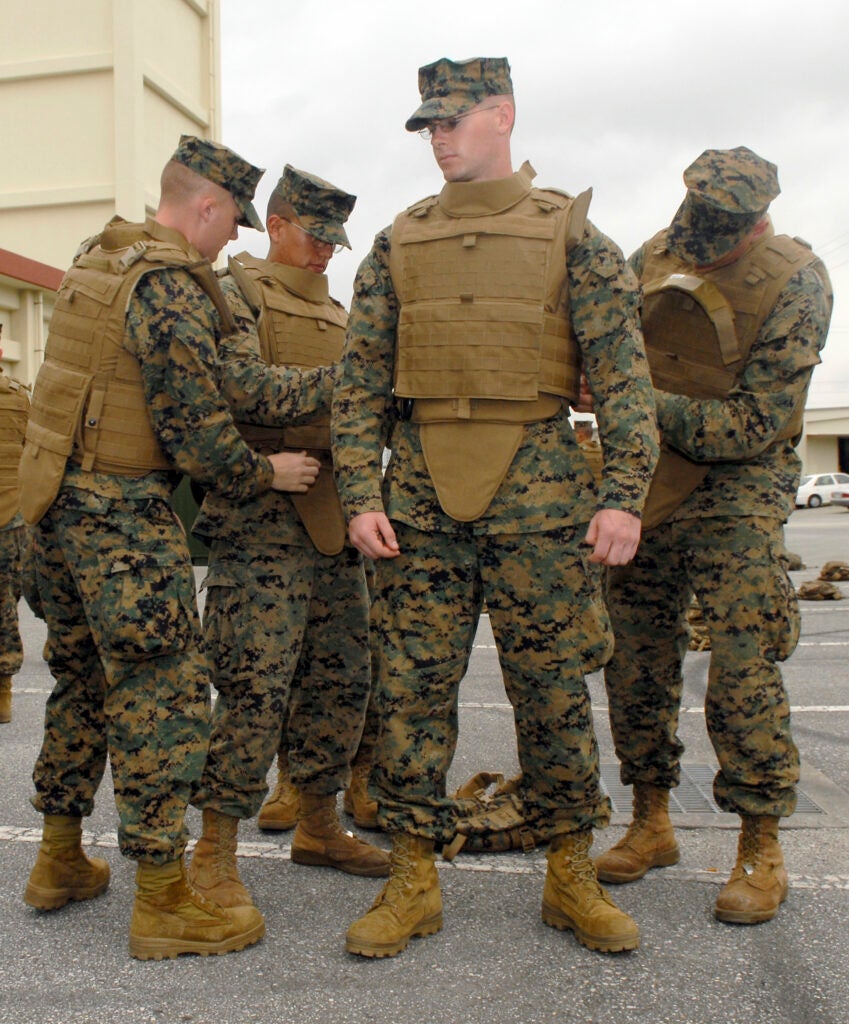 United States Marines training with modular armor. Although modern armor—made of ballistic fibers and ceramic plates—is lightweight by medieval standards, soldiers still wear up to 45 pounds of protective gear, about the weight of a six-year-old child. Aware of the strain this puts on soldiers, both the Army and Marines aim to lighten body armor by 10 to 15 percent over the next decade without changing its tensile strength. To do that, says Lt. Col. Frank Lozano, former program manager at the Army’s Program Executive Office Soldier, the military is investing in new polyethylene ballistic fibers—which could form soft, supple vests that are nonetheless 20 to 30 times stronger than steelCK—and fine-tuning ceramic armor at the nanoscale to make complementary hard protection. The Army is also making armor more modular, so soldiers can tailor it to individual missions. To patrol without appearing threatening, for example, troops will be able remove ceramic inserts from soft armor vests and wear the vests concealed beneath their clothes. “This enables maximum range and mobility,” Lozano says, “so it gives protection at its lightest possible.” Production of next-gen armor will start as early as 2016. 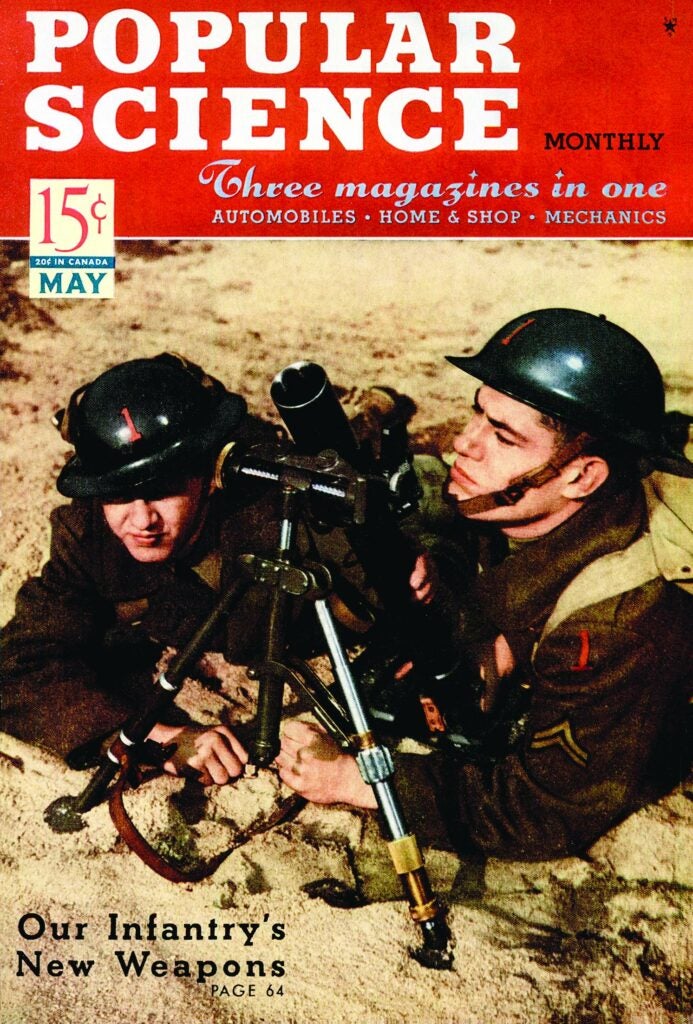 A History Of Heavy Loads

Image: A 1941 cover on the state-of-the-art military gear of the era. More on the story in this article, also from our November 2014 issue. 7th Century B.C. Assyrian warriors wore iron-shinned boots, scale armor, a helmet, shield, sword, and spear into battle—upward of 60 pounds. 359 B.C. Alexander the Great’s father was the first to order soldiers to be self-sufficient­, and his troops carried 10 days’ rations along with their weapons, while marching 40 miles a day. 100 B.C. Roman Legionnaires earned the nickname “Marius mules” after emperor Gaius Marius required them to routinely march with loads weighing as much as 80 pounds. 1809 British rifleman Benjamin Harris complained of the Napoleonic Wars: “Many a man died, who would have borne up well to the end of the retreat, but for the infernal load we carried.” 1842 Some weight was a matter of personal preference. “Many young officers would as soon have thought of leaving behind their swords as march without their dressing cases, their perfumes, Windsor soap, and eau de cologne,” said Major-General Nott of British troops in Afghanistan. 1863 The quartermaster of the Union Army during the U.S. Civil War observed that many soldiers simply shed their loads, saying, “On the late campaign, the Army abandoned in battle about 25 percent [of knapsacks].” 1944 “We all knew we were carrying too much weight,” said Private First Class Hugo de Santis of landing on Omaha Beach on D-Day. “The equipment had some of us whipped before we started.” 1960s It’s no accident that U.S. soldiers took on the nickname “grunts” during the Vietnam War: The average total weight of rucksacks in an infantry battalion in Vietnam approached 100 pounds. 2000s “The load has really changed over the last 15 years,” says Frank Furman, logistics program manager for the Office of Naval Research. “But all of sudden we were in Iraq, and we found a lot of [lighter] protective gear was inadequate for that.” He says incoming Marines now train with flak packs and Kevlar to prepare for their heavy combat burdens. 2014 “The bulk of the weight carried now,” Peter Singer, defense expert at New America Foundation, says, “is a combination of protective vest, flak vest, helmet, and, mostly, the electronics gear—in particular batteries. The electronics gear is different from the past.”
BigDog
editor's picks
Military
November 2014
solar energy