Not creepy at all. 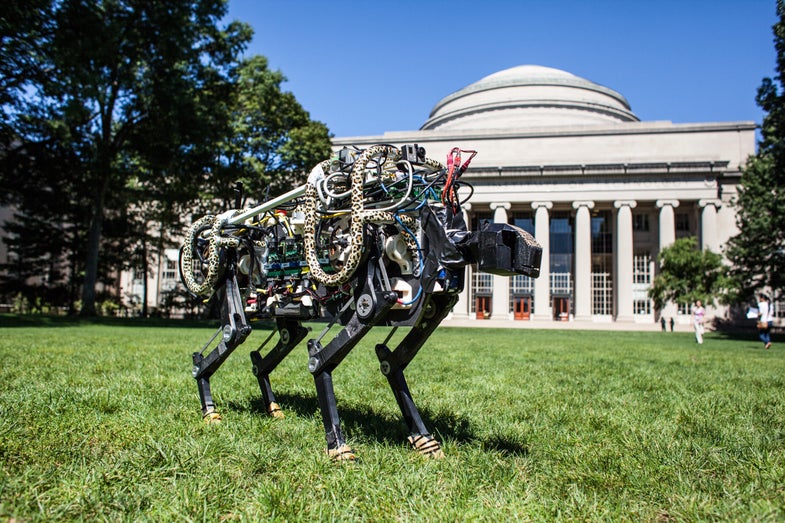 It bounds just like a rabbit, but it’s not quite as cute. Check out the latest iteration of MIT’s Cheetah robot. It’s just received an algorithm update that allows it to run by itself on grassy terrain:

The robot is now able to run, untethered, up to 10 miles per hour on a treadmill indoors, its makers report. It can also jump over short obstacles and continue running. This lab previously showed its Cheetah robot could run up to 13 mph, but only when tethered, indoors:

As you can see, the Cheetah’s new algorithm improvements make it more agile and able to handle real-life terrain. That’s essential if humans want robots in the future to help them carry loads, or explore places that are too dangerous for people, such as the areas surrounding a nuclear disaster. In fact, that’s why some labs focus on legged robots, instead of wheeled, which could drive more quickly. The idea is that legs could propel robots over rubble. One day, they may even be able to do so at a runner’s pace.

One other group that’s made a running, legged robot is Boston Dynamics, a private company that originally grew out of the work of an engineering professor at MIT. Last year, the company posted a YouTube video showing a robot named WildCat running around in an asphalt parking lot. WildCat reached speeds of 16 mph and both bounded and galloped, two methods of running that real-life, four-legged animals use.

The MIT Cheetah bounds, which is perhaps easiest to imagine if you think of how a bunny hops. Both forefeet go down first and push the animal off the ground. Then the hind feet both hit the ground at once, and continue to push the animal forward. Compared to galloping, bounding is easier to model mathematically, MIT mechanical engineer Sangbae Kim told MIT News. The lab will work on untethered galloping later.

To run faster, the MIT Cheetah’s newest algorithm controls the amount of force the robot’s feet exert when they push off the ground. That force control also helps the bot jump over obstacles and maintain balance on slightly bumpy surfaces.

In addition, the robot has an electric motor, which helps it run more quietly than the diesel-fueled, internal combustion engine that WildCat has. Running sneakily—that’s exactly what I’ve always wanted robots to be able to do.