The robot can course at 22 kilometers per hour. 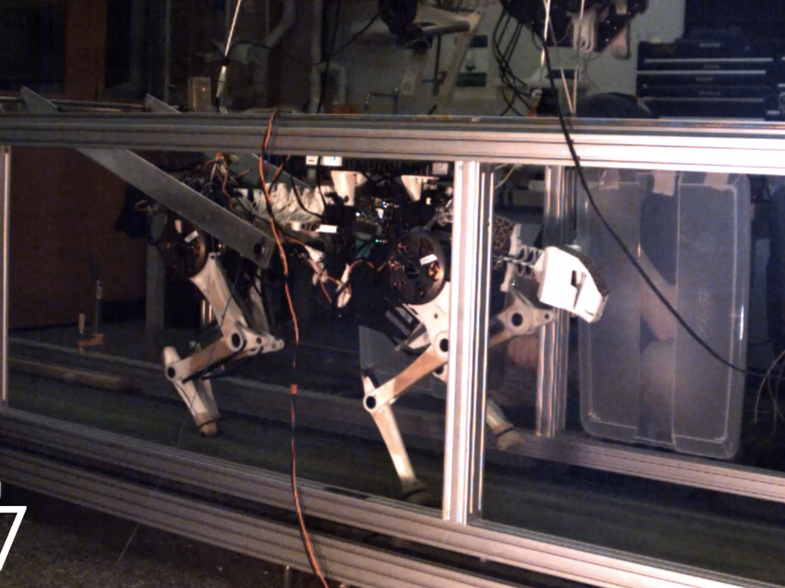 Boston Dynamics’ Cheetah robot may be the fastest, but MIT’s version of the DARPA-backed quadruped robot is proving to be the most efficient. In a newly released video, MIT’s Biomimetic Robotics Lab shows off it’s new and improved Cheetah, which can move along at a respectable 13.7 miles per hour and carry its own power source. Outside of the lab on the open savannah, that’s a critical capability.

But while MIT’s Cheetah isn’t the fastest–we’ve seen Boston Dynamics’ Cheetah set a land speed record for running robots at 28.3 miles per hour–that’s not really what we’re looking for in the video below. There are two primary aspects of MIT’s design that set it apart: one is it’s biomimetic design that reduces stress on joints and improves efficiency (things like Kevlar tendons in the legs that act like real tendons, helping the limbs return to zero without requiring power from the Cheetah’s electric motors). These gains in efficiency mean that the Cheetah can theoretically carry its own power source, something other running robots can’t do (in the video below power is being supplied externally, but the lithium polymer batteries Cheetah would carry are simulated by the addition of nearly seven pounds of dummy weight).

The second breakthrough, which you can witness in slow motion in the second half of the video, is the gait transition from trot to gallop, which is pretty impressive (the video goes slo-mo at about 1:20). Right at about 13 miles per hour Cheetah shifts seamlessly from a stuttering trot to a loping run–much as a real cheetah would as it transitions into high gear.

Then there’s a third major design breakthrough, which is the decorative cheetah print detail and wicked sculpted cheetah head that’s been added to the front of the ‘bot. See it all come together in the video below.