Why snow doesn’t melt when you set it on fire 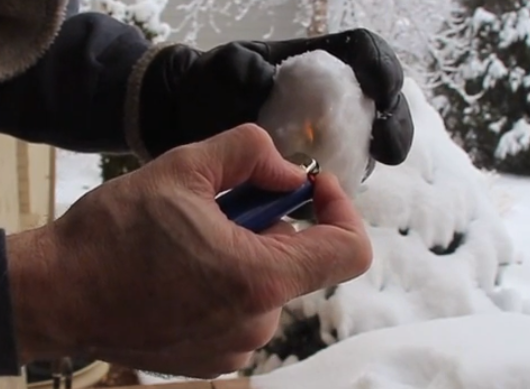 Real snow shows char marks when a flame is put to it. Phil Plait
SHARE

This post has been updated. It was originally published on 2/4/2014.

After a snowstorm hit Atlanta and a good portion of the Eastern Seaboard in January of 2014, snarling traffic and stranding many, rumors circulated that it wasn’t snow. Some said that it was fake snow, either deposited via chemtrails, or made up of psychoactive substances, or nanobots. (If I had nanobots, I wouldn’t waste them by spreading them haphazardly over Atlanta. I’d pick Bavaria, so I could infiltrate the Illuminati.) Similar misinformation is cropping up on social media in the wake of Winter Storm Uri in the American South.

A strange conspiracy, to say the least. Some viewers, especially those who have not encountered snow before, could possibly be forgiven for believing the idea had some merit. A rash of videos showed people torching snow, only to see it (apparently) not melt, leaving a black char mark on the exterior of the white stuff … as if it were synthetic, and not just made of frozen water.

Fed up with these misleading videos, astronomer and science writer Phil Plait took a lighter to snow in Boulder, Colorado, and got a similar result. But this is merely how real snow behaves. As Maggie Koerth-Baker wrote at BoingBoing, Plait takes advantage of the situation to explain the science behind what is going on in, in this video:

As he says, when snow melts, the water is absorbed by the remaining loosely packed snow. This is how snow cones hold onto their delicious sugary water, and explains why they are so delicious. And the black char marks are traces of soot from the lighter fluid.