One-Third Of Borneo’s Rainforest Has Been Cut Down 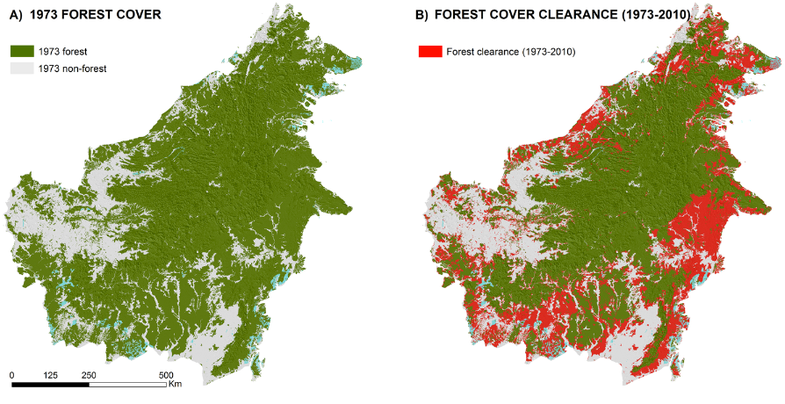 In the last 40 years, nearly one-third of the rainforest on Borneo have been cut down. That’s nearly twice as fast as the average deforestation rate for tropical rain forests worldwide. That raises the question: What’s going on?

In part, it’s because of the high-quality forests on Borneo, the world’s third-largest island, an incredibly biologically diverse landmass that is divided between Brunei, Indonesia and Malaysia, and is one of only two remaining habitats for orangutans. Between 1980 and 2000 more wood was harvested from Borneo than from Africa and the Amazon combined, for example.

This logging can take place because many areas of the island are not protected, or their protections are not well enforced. Protections are “often inadequate or are flagrantly violated, usually without any consequences,” the environmental group WWF noted. Illegal logging has also become a way of life and source of income for many communities, they added.

Many areas of Borneo are also perfect for growing palm oil plantations, and as demand for this oil has increased–especially in the last decade–more land has been cleared for this purpose. About 10 percent of the entire island now consists of single-crop monocultures such as these plantations, according to the study that documented the deforestation, published in PLOS ONE.

The study documented forest loss by using satellite images, which can gauge by how much light is reflected what type of vegetation exists over an area. The study was done in part because deforestation isn’t well-documented by local governments, and some statistics kept by the Indonesia, for example, are highly suspect, underestimating forest loss, the authors wrote. Borneo also has large coal deposits, as well as abundant minerals–including tin, copper, gold, silver, coal, diamonds–which are increasingly being mined, and land developed to allow for this activity.

In semi-related and less depressing news, a new species of ground squirrel was recently discovered in Borneo, which breaks a record for tail size and may eat deer’s hearts.