Earth’s Magnetic Field Could Flip Faster Than We Thought

'Down' could become the new 'up' within our lifetimes 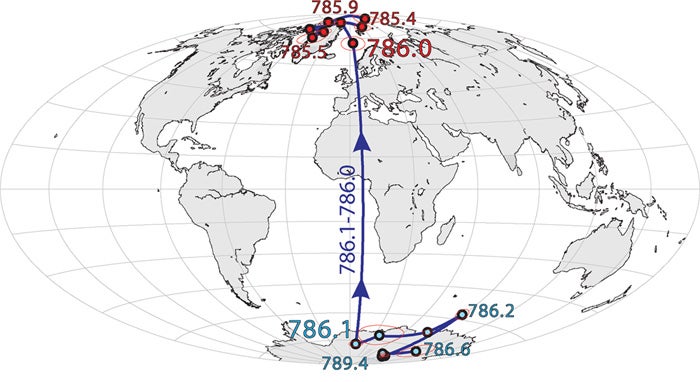 The 'north pole' — that is, the direction of magnetic north — was reversed a million years ago. Starting about 789,000 years ago, the north pole wandered around Antarctica for three thousand years before flipping to the orientation we know today, with the pole somewhere in the Arctic. UC Berkeley
SHARE

The magnetic poles of the earth have switched back and forth many, many times during the 4.54 billion years that the Earth has been around. Previous research suggested that the process of reversing the poles took place over a long time period, potentially over a few thousand years. But new research shows that the reversal could actually happen much faster than that, with the magnetic North Pole migrating to the South Pole in a time span as short as a century.

Researchers at the University of California at Berkeley dated ancient lake sediments in Italy that recorded the last magnetic reversal, which occurred 786,000 years ago. Their findings were surprising. “What’s incredible is that you go from reverse polarity to a field that is normal with essentially nothing in between, which means it had to have happened very quickly, probably in less than 100 years,” said co-author of the study Paul Renne in a press release. “We don’t know whether the next reversal will occur as suddenly as this one did, but we also don’t know that it won’t.”

Regardless of the speed at which it occurs, that next reversal might happen sooner than originally thought. Geophysicists have noticed that the earth’s magnetic field has been weakening faster than expected lately, leading them to conclude that a full flip could happen sooner rather than later. (Don’t panic. ‘Sooner’ in this case, means within the next two millennia.)

Scientists haven’t found any evidence that previous reversals caused any major damage to inhabitants of the earth. But a changing magnetic field could affect current technology, like electrical grids. Luckily, according to this new research, that disruption should only last for one generation, not several. What a relief.