Create A Smoking Pumpkin With An E-Cigarette

How to hack your jack-o'-lantern 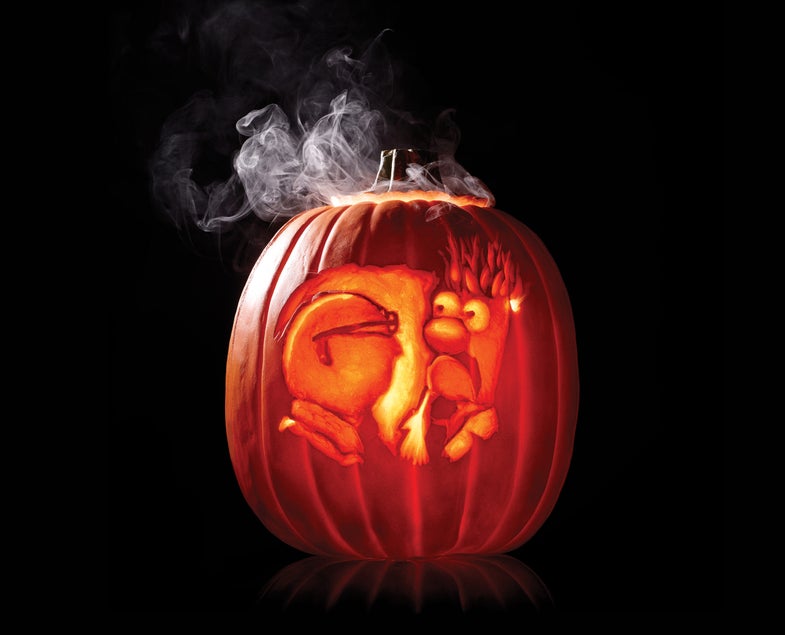 Want to put your neighbors to shame this Halloween? Pimp your pumpkin with a miniature smoke machine. A modified e-cigarette can create a surprising amount of fog, giving your carving an extra eerie touch.

Start with a type of e-cig called a clearomizer, available online or at your local vape shop. It has a refillable chamber that you can load with the “fog juice” used in standard smoke machines. Inside, a wick draws the liquid past a wire coil heated by a battery, where it’s vaporized. Normally, a person sucks this vapor into his or her mouth, but the smoke machine needs a way to push the fog out. An aquarium air pump attached to the battery end will do the trick.

Unfortunately, a sealed connector between the battery and the chamber blocks airflow through the e-cigarette. Ditch the battery and put a hole through the connector by replacing its solid central pin with a hollow pin from an unsealed connector (sold on websites such as MadVapes). By attaching this to a new power supply-—a universal AC adapter is convenient—you can feed both air and electricity to your device. Then use its smoke for a spooky effect.

How to Make the Mini Smoke Machine

1. Unscrew the clearomizer‘s chamber and battery case from its metal base. Run a pin or needle through the center of the base, then remove it. Fill the chamber with fog juice and screw it back to the base.

2. Break the battery case to separate the metal connector. Taking care not to touch the wires and create a short circuit, cut away the battery. Then clean out the connector, removing and discarding the circuit board, any plastic pieces, the o-ring, and the central metal pin.

3. Solder the black wire, which will ground the device, to this connector.

4. Now take the unsealed connector and remove its o-ring and central pin. Solder the red wire to the pin, being careful not to block the hole. This will be the positive lead.

5. Insert the o-ring and the unsealed pin into the original battery connector. Screw the modified connector onto the base of the clearomizer.

6. Run the aquarium tubing up the red wire until it reaches the battery connector. Tape it securely in place so no air can escape. Snip a slit in the tubing and pull out the end of the red wire. Seal the slit with hot glue and secure with tape.

7. Attach the loose end of the tubing to the aquarium pump. Tape the free ends of the red and black wires into the positive and negative holes in the AC adapter. Turn on the power, then the air, and watch the smoke pour out!

If you don’t like e-cigs, go low-tech. Push several nails into the floor of your jack-o’-lantern and place a small foil pie tin on them, with a few tea candles beneath. When you pour a little fog juice into the tin, the candles will heat and vaporize the liquid. This setup can’t control the fog like the modified e-cigarette can, but the effect should be equally impressive.