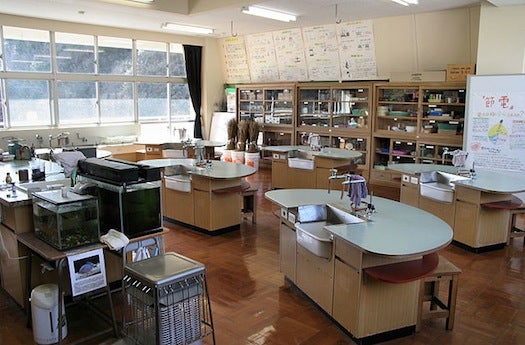 A year ago, our Popular Science/InnoCentive challenge here on PopSci asked for lesson plans that could be used at the middle-school level in each of five areas of science that will be vital in the future. Materials couldn’t cost more than $50, and the lesson needed to fit into no more than three 50-minute classes. Here, we proudly announce the winners and runners-up.

Lisa Schmidt began her professional career researching cancer. But after she discovered that teaching biology to university students was more rewarding, she left lab research to instruct teachers in the higher-education department at Flinders University in Australia. “I took my scientific, analytical principles across to teaching,” Schmidt says. “I wanted to test that what I was doing was working and go read the literature and see what other people were doing.”

Biomimetics was such a new topic for Schmidt that she had to look up the term. To make the lesson simple and engaging, Schmidt chose a design in nature that all students are familiar with, whether they know it or not: bone. Opening with discussions of what bones are, what they do, and how to break them, the lesson culminates in small groups building their own model bones to learn what it is about the structure of bone that helps it support our weight.

Ryan Fox left a career in engineering to be a teacher when he realized that the volunteer mentoring he did in his neighborhood was more satisfying to him than his day job. “Teaching science is the best of both worlds,” Fox says—a pleasure and a living. Fox put together the largest team in our winners’ circle, including his wife, Karen, and colleagues at the Notre Dame Collegiate prep school in Alberta, Canada: drama teacher Dan Guenette and fellow science teacher Barbara Ann Hession. Together, the four assembled a three-part lesson plan that seeks to grab students with ideas from biology, evolution, and engineering while educating them about key biomimetic concepts.

Christopher Gaw and Anapuma Joseph, both biochemistry students at Ohio State University, collaborated on a lesson plan in biomimetics that uses the home of the humble honeybee. “The shape of beehives is something kids know about, but they don’t understand why it’s important,” says Gaw. By building a beehive’s hexagonal structures from paper that can support many times a human’s own weight, students get a clear lesson in what makes these shapes so strong. Joseph says that the hands-on approach is important because it can inspire younger kids who might not respond to just talking and memorizing. “I’m a learner who likes to have something to touch in front of me,” says Joseph. “I strongly believe that if you orient students toward this sort of thing, you can get anyone interested.”

Brothers Alan and Matt Chalker designed lesson plans for high-school Science Olympiad events for years before attempting our challenge. No wonder they won first place in two categories—Fuel Cells and Big Data—and came in third place in Polymers. Matt studied materials science and engineering and designs education resources for Chicago’s Museum of Science and Industry. Alan is a program director at the Ohio Supercomputer Center. Given the tight budgets of most school districts, the spending limits of our challenge attracted their attention. “Cheap lessons are more useful to a larger number of people,” Matt says.

But it isn’t just the challenge that motivates them to create other lesson plans. Building up a new generation of scientists and engineers is foremost in their minds. “We both have a passion for science and education,” says Alan. “And what we do now is really informed by our backgrounds in science. I think we’re both really trying to pay that back.”

Tanner Bobak brings a different perspective than most of the other entrants in the Innocentive Challenge. Only 14 years old, Bobak didn’t know much about what a lesson plan traditionally looked like, but he knew which approaches helped him learn and got his attention as a student in the classroom. After consulting with one of his science teachers, Bobak put together a lesson plan that showed students how to build their own fuel cell on the cheap by taking advantage of the electricity producing reaction between oxygen and aluminum foil. “It doesn’t produce much power,” Bobak says. “But it’s a really cheap way to demonstrate the concept.”

Ruby Grewal discovered her passion for education while teaching as part of her graduate degree. “I really enjoyed the process of discovery, and that drew me to science,” says Ruby Grewal. After a stint as a textbook editor, Grewal is back teaching at her alma mater, the University of Alberta. Taking her cue from recent research on the electrical conductivity of certain bacteria found in soil, Grewal’s lesson plan demonstrates the variety of substances that can be turned into fuel cells, even common playground dirt. It also reminds students that life can be found all around them—even in mud.

FIRST PLACE
Name: Nigel Jalsa, Trinidad and Tobago
Lesson: Compare a paper U.S. $1 bill to an Australian $5 bill, which is made of rugged polypropylene

Nigel Jalsa, a chemistry lecturer who got his first chemistry set at age 12 as a gift from his parents, wanted to encourage students to think about plastics in their everyday lives and to realize that plastic is everywhere, even in money. Jalsa says he wanted to show that polymers make it possible to give familiar items unusual physical properties.

Though Jalsa anticipated a challenge in teaching students much younger than the university students he’s used to, he found that he was able to translate the lessons easily. And, Jalsa says, if anything it’s more important to reach that younger student. “One must have good middle-school and high-school students to have good college students and scientists,” Jalsa says.

At press time it wasn’t possible to reach Tufekci directly, but he’s a graduate student of neuroscience at Dokuz Eylul University.

Claude Hartman taught physical science at high schools and community colleges around California for decades. Now retired, Hartman designs exhibits and interactive lessons at the Exploration Station, a small, hands-on science museum in Grover Beach, California, for whom he recently built a wind tunnel for radio-controlled planes and a Bernoulli blower that suspends items on a cushion of air.

Hartman, who is a lifelong woodworker, says he has always emphasized demonstrations in his teaching; and if a demonstration of something wasn’t easily available, he would build it himself. “Anything you can do and see visually, instead of just talk about, that’s what I always tried to do,” says Hartman.

SECOND PLACE
Name: Norah Dunkerly-Richards, U.S.
Lesson: Make an ersatz glacier in the freezer and then take a core sample of the ice

Norah Dunkerly-Richards was halfway through a major in biochemistry with the intention of becoming a pediatrician when she realized that she enjoyed her work at an after-school program teaching young kids about science much more than she enjoyed her coursework. So she switched gears to education. Using the simplest of ingredients—crushed ice and a little food coloring—students make their own miniature glacier. After it’s spent a night in the freezer, they then take a sample of its core, just like researchers do on real glaciers. The lesson shows the students how scientists get the data used to study the Earth’s climate from the past.

As a PhD student at the University of Colorado, Ulyana Horodyskyj’s studies on the effects of climate change took her to the Himalayas. There, she focused on Nogzumpa, the region’s largest glacier. Using historical photos and more recent time-lapse photography, Horodyskyj tracked changes in the glacier over the course of decades.

Those thousands of pictures form the backbone of her lesson plan, in which students analyze the images and measure how the glacier has changed over time. Focusing on one glacier’s change over time helps the subject seem more real than charts and lectures can, says Horodyskyj, who feels that hands-on analysis and real-time study are key to getting kids more interested in science and understanding how it affects their lives. “We’re bringing up students in a science age,” she says, “so we have this chance to make science cool.”

The Chalkers’ lesson plan focuses on using Google’s number-crunching Correlate tool to show students how to analyze data, in this case the number of searches on a specific set of keywords such as “The Dark Knight Rises” or “Baltimore Orioles in the World Series.” Because students can search for data on topics that most interest them—sports, hobbies, or TV shows—they engage with the data in ways they might not with a traditional lesson. Further, because Google’s geo-tagged query dataset is constantly evolving, students learn how it changes over time and across the country. They can then parse that second level of data to draw conclusions about events that influence searches or draw connections between geographic regions (for example, there are lots of Yankees fans in Florida due to a large number of New York transplants in the state) based on search history.

Aaron Leanhardt, a physicist at the University of Michigan who typically studies the behavior of an exotic state of matter called a Bose-Einstein condensate, strives to offer students a better understanding of not only science, but civics as well. By repeating a simple experiment—the flipping of a coin—Leanhardt gives students a better understanding of randomness in action and also of the sample sizes needed for a reliable experiment.

Leanhardt says the lessons kids can take from it can be applied to myriad random events, from polling data to learning to think critically about surveys to understanding the diffusion of gasses. “I think it’s important to start kids in middle school with an understanding that, with random events like polls, if you get 57 out of 100 one time, you’re not going to get 57 out of 100 every time,” Leanhardt says.

Like most dads, Gilbert Zalczer tries to help out with his son’s homework whenever he can. Zalczer’s lesson plan started as a way to help his son learn about statistics, but frustration at the general public’s frequent misunderstandings about the topic inspired him to turn the project into a lesson plan for the Innocentive Challenge. Making experiments tangible helps engage young students, says Zalczer, a physicist who has worked for France’s Atomic Energy and Alternative Energies Commission since 1974. “They can understand uncertainty and randomness when it’s happening in front of them better than they can on a computer.”