DNA from tooth enamel helped scientists trace where humans grew up and how they spent the rest of their lives. 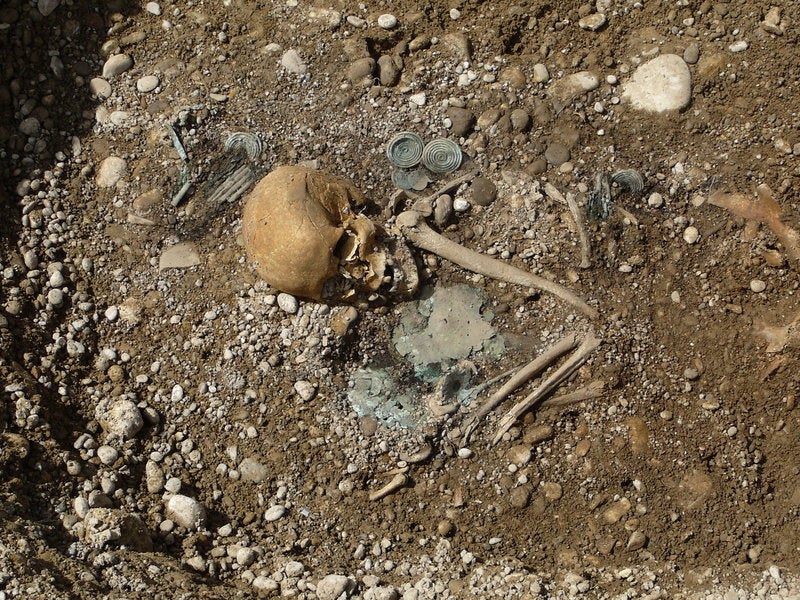 Imagine you’re a sixteen-year-old girl living in New York City. One day, your mother decides that it’s time for you to leave the nest. You’re going to meet your new husband for the first time, she says. But to get to your new home, you have to walk all the way to Richmond, Virginia. That’s 342 miles away.

Similar treks may have sustained a small community in southern Germany for nearly seven centuries, according to a new study in Science examining the 4,000-year-old group’s DNA. By uniting cutting-edge genetic techniques and traditional archeology, researchers reconstructed family trees and traced migration patterns across Europe to reveal a depth of social complexity and inequality that had previously been lost to time.

The study focuses on 104 individuals who lived during the early Bronze Age, when humanity was beginning to swap stone tools for more sophisticated instruments crafted from metal. The pyramids had just been built, the mighty Babylonian empire was in its infancy, and the Code of Hammurabi was soon to be written. “People in the past were very mobile and very much interconnected,” says archeologist and lead researcher Philipp Stockhammer. “It’s a myth that people were very isolated and simple.”

“We know there’s social inequality [today],” says Simon Underdown, an anthropologist from Oxford Brookes University who was not involved in the recent study. “What this is allowing us to do is shine a light 4,000 years back, and see that the way societies organized themselves… it was pretty similar to how we are now.”

Stockhammer and his colleagues studied skeletons hailing from the Lech River valley—an unassuming rural community that spanned just around six square miles, and maintained a surprisingly stable chain of family farmsteads from 2500-1700 BCE. What made the area a perfect place to study, according to Stockhammer, was that each farm had its own graveyard. “We could really see who lived in a farmstead, because the family was buried beside it,” he says.

How each person was buried—and what they were buried with—provides a lot of potential information about their social standing. For men, typical grave goods included weapons (daggers, axes, chisels, and arrow heads). For women, elaborate body adornments (like large headdresses and massive leg rings) were the things to bring into the afterlife. Pins, apparently agender, were buried with both sexes. And in general, more important people had more stuff surrounding their remains.

With dozens of study subjects neatly signaling their social rank, the next step was to try and pull DNA from their skeletons. Usually, ancient DNA is very fragmented and small, weathered down over time due to exposure to heat or moisture or bacteria. So the team was surprised and excited to find that the gravelly, south German soil kept genetic material relatively well-preserved.

Indeed, the viability of the skeletons’ DNA meant that Stockhammer’s team could connect more traditional archaeological insights—using bones and burial practices and artifacts to piece together an idea of how people lived and died—with genetic information about how those people were related and where their lives had taken them. Researchers pulled one tooth from each subject, extracting DNA from the dental pulp inside to reveal each individual’s genetic sex, their maternal lineage, and how they were related to others in the community. The teeth had another use as well: Archeogeneticists checked dental enamel for strontium and oxygen isotopes. We ingest these elements in our food and water, so it’s possible to match the signatures of such deposits to particular locations. This signals where a person grew up, and where they spent their childhood.

The researchers noticed a few intriguing irregularities in the results. For starters, none of the family cemeteries contained any adult daughters. There were also several females buried in richly-furnished graves who had apparently grown up far away, while some local males showed up in sparse graves on the farmsteads of wealthy families they had no relation to.

After combining this new genetic evidence with previous theories and data gathered from larger genetic surveys, the team observed a level of social complexity that went “beyond what we have always assumed what household life was,” according to Stockhammer. They were looking at evidence of socially stratified society within a singular household.

At most sites, geneticists were able to map four or five generations of fathers and sons, so they believe that the male lineage inherited the farmsteads. The wealthy foreign women were probably their wives, who came from distant communities to marry them—while the missing adult daughters left to marry into other communities in a sort of bridal exchange. Based on their dental enamel, it appears the incoming brides travelled from as far away as the pre-Alpine lowlands (modern-day Italy and Switzerland) and areas inhabited by Únětice culture (much of Central and Eastern Europe)—regions more than 260 miles away.

What about the low-status locals left in humble graves? These people were not biologically related to the core families of the studied farmsteads, but they were buried alongside them. The most likely explanation is that these powerful families took on servants or slaves from less fortunate lineages in the area. While there is clear evidence that Classical Roman and Greek households featured servants and slaves, this new evidence indicates that the practice may have existed in this particular region nearly 1,500 years earlier than previously thought.

While it’s impossible to know how the household workers and migrant women were treated, Stockhammer says the system did have its benefits. “I’m absolutely certain that these women from afar were absolutely crucial for the transfer of knowledge,” he says. “They were really bringing society forward.”

Archaeological studies tend to examine prehistoric populations on a continental scale, looking for big changes and tracing massive genetic shifts. Because most of Europe had no written documentation prior to the Iron Age (around 1000-900 BCE), it’s generally been impossible to investigate the individuals within those studied societies. The ability to extract genetic information using aDNA is allowing scientists to learn directly from the people in the graves, not just from the objects they left behind.

Moving forward, both Stockhammer and Underdown say, this sort of collaboration between archeologists and geneticists will likely become the norm. In order to really understand the past, they say, we have to integrate all available methods. As each generation of aDNA technology becomes more advanced (and, by extension, more accessible and affordable), such techniques will offer a new level of insight into the lives and relationships of prehistoric people.

“Rather than just being a pile of gold from a grave or a load of fragmentary bones, [this study] allows you to step into that household 4,000 years ago,” says Underdown. “This is a taste of how archeology will be done in the future.”