The artist responsible for those gold-leafed Nobel portraits would like to paint something other than old white men, please

Meet the official portrait artist for the Nobel Prizes. 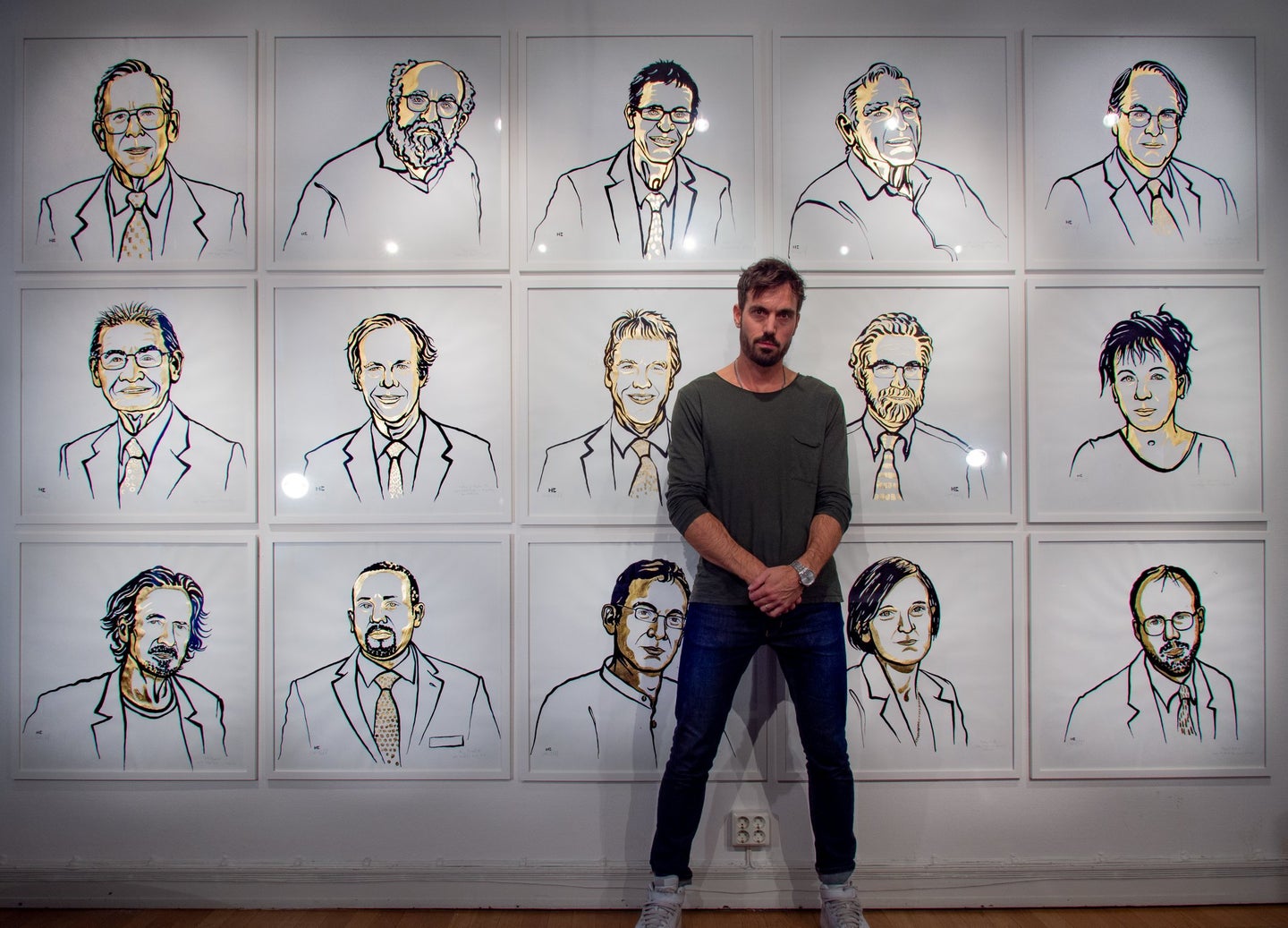 For two weeks every October since 2012, Niklas Elmehed’s paintings appear in thumbnails, tweets, and articles in outlets all over the world. Elmehed is the official portrait artist for the Nobel Prizes.

He isn’t allowed to say exactly how far ahead of time he is told the winners, but it’s not difficult to infer that the work needs to be done quickly. The paintings—yes they’re real paintings, not digital renderings—are released in the same second the prizes are announced, says Elmehed. As we video chatted this month, shortly after the last winner was announced, still attached to the wall behind him was the completed portrait of that day’s Peace Prize winner, Abiy Ahmed. This painting, like the others, is graphically clean, with thick black outlines, mounted with gold foil highlights.

Soon, Ahmed’s portrait will be mounted on a wall along with those of all previous Laureates—a place that Elhemed jokingly calls “the golden wall”—at the Nobel Media headquarters in Stockholm.

The Sweden-based artist started working for Nobel Media in 2012 as an art director, before switching over to freelance several years later. The portraits have been his responsibility from the beginning. Before 2012, the media and images that accompanied the winners were pulled together more or less ad hoc, grabbing whatever shots they could find from the web. So really, it’s no surprise to learn that the decision to switch over to paintings came about largely because of the winners in the science categories.

“Many of the science laureates are pretty hard to get pictures,” explains Elhemed. “If you search for a photo, it’s a highly pixelated, low-res image on a webpage somewhere in the world. You just find their face on the staff members page, taken with a lousy camera.”

If you’ve ever taken an undergrad or graduate science class, you’re probably familiar with this type of photo: It’s maybe twenty or thirty years out-of-date, and shows your professor sitting behind a desk in a lab coat, or out in a grassy field with a floppy hat. It has all the image clarity of a photo of a “Bigfoot sighting” from the 1950s. Not a great option when the picture chosen is going to be seen by millions of people.

And of course Elhemed couldn’t just ask the winner for a better, more up-to-date image, because that would ruin the surprise. So, at first, “the idea was just to make a drawing of the missing laureates.” But after the first year, Nobel Media realized how much nicer and more uniform the paintings looked. It wasn’t long after that they asked Elmehed to paint all of the winners. And it’s a lot of work.

“I have to perform the best all the time,” he says. “It’s like a race.” Whenever it is that he’s given the names and photos of the winners, he has to quickly and artistically capture the likeness of a person who is about to become spotlighted worldwide. According to one 2015 tweet, he painted his portrait of Literature Laureate Svetlana Alexievich in about 40 minutes.

As of 2019, he’s painted almost fifty drawings. It’s a feat worth commending, especially when the majority of us struggle to translate our passion into intelligible art. At the end of the day, though, what Elmehed really wants is for people to realize that behind all of these paintings, there “is actually a tired guy, with a brush in his hand, who paints with traditional paint.”

Elhemed’s intimate familiarity with the faces of laureates has also made him acutely aware of the trends in the demographics of prizewinners.

“In the scientific prizes, at least during my years,” he admits, “it’s more a specific category of people. White men, older men, that receive this prize.”That’s not to undermine the people who have won, he says: “I mean, all of these people, with their brains and what they have achieved, they really deserve to get this prize. And a portrait, as well.”

Still, the most exciting thing for Elmehed is the diversity of his portrait subjects—something that’s been sorely lacking for most of the Nobel history. In his entire tenure as the official portrait artist, Elmehed has only painted two women spanning all three of the science prizes (May Britt-Moser for medicine in 2014, and Donna Strickland for physics, last year). He has painted no Black or Latinx people in these categories.

When it comes to the science prizes, “it’s extra fun when [a female wins], or something that stands out, absolutely,” Elmehed says. He pauses, then clarifies: “When you get [someone] other than an old white man.”