Back on April 22, residents of California and Nevada had their day interrupted by a series of sonic booms and... 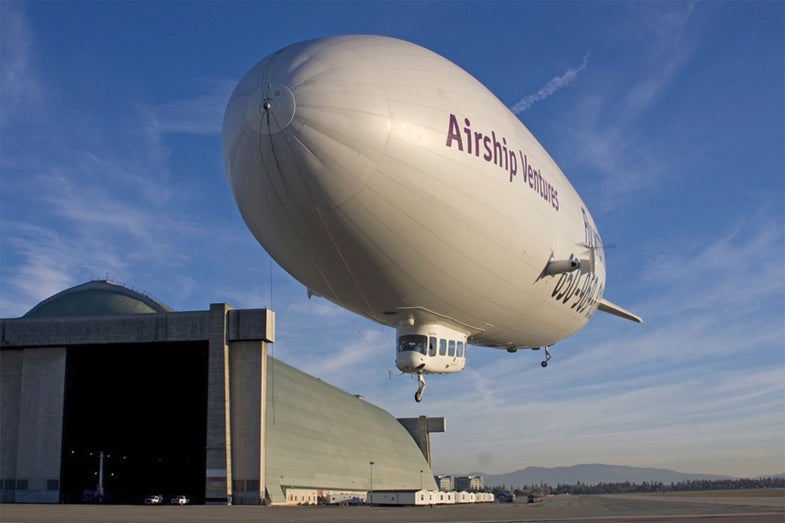 Back on April 22, residents of California and Nevada had their day interrupted by a series of sonic booms and a huge daytime fireball in the sky, products of an incoming minivan-sized asteroid that came slamming into the atmosphere, breaking up on its way to the ground. The fireball ended its descent in the Sierra Nevada mountains, where some chunks of the asteroid have been recovered. But a joint SETI/NASA team thinks there’s more asteroid to be found, and it has chartered a zeppelin to help them scour the ground from above.

The zeppelin, from Mountain View-based Airship Ventures, is allowing the researchers to hunt for asteroid fragments with a powerful optics system that allows them to zoom in on places of interest and evaluate potential fragments. If it appears there’s something worth inspecting up close, they can radio to teams on the ground that can then go in for a closer look.

It’s the first time a zeppelin has been used to search for asteroid fragments, and so far it’s working fairly well. The team has identified about a dozen sites that need to be inspected, but have actually reached only two of them with ground teams thus far. At this point, the clock is ticking; the longer the fragments are on the ground and exposed to the elements, the more their chemical compositions–the aspect that interests the researchers most–will degrade.

So far, the largest sample of the asteroid collected weighs just 0.7 ounces. For a meteor big enough to create a huge daytime fireball like the one witnessed on April 22, the SETI/NASA team estimates that there must be some larger pieces out there. Such fragments could tell astronomers and geologists a good deal about the meteors and asteroids that populate our solar system, and how impacts like last month’s originally brought elements like carbon–and possibly the ingredients for life itself–to Earth.