Software Now To Blame For 15 Percent Of Car Recalls 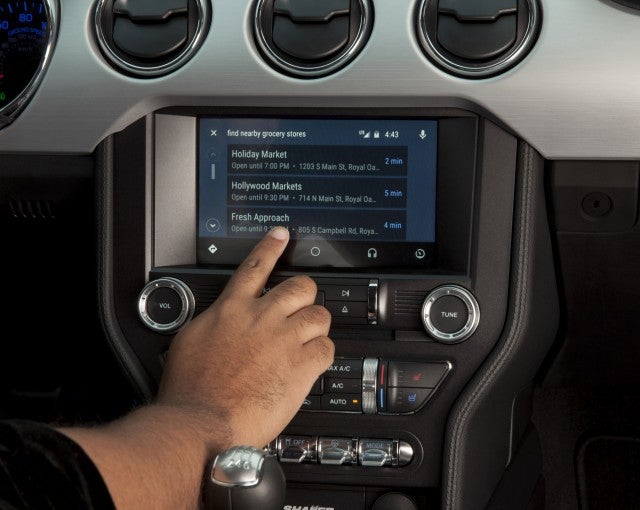 Apps freezing or crashing, unexpected sluggishness, and sudden reboots are all, unfortunately, within the normal range of behavior of the software in our smartphones and laptops.

While losing that text message you were composing might be a crisis for the moment, it’s nothing compared to the catastrophe that could result from software in our cars not playing nice.

Yes, we’re talking about nightmares like doors flying open without warning, or a sudden complete shutdown on the highway.

The number of software-related issues, according to several sources tracking vehicle recalls, has been on the rise. According to financial advisors Stout Risius Ross (SSR), in their Automotive Warranty & Recall Report 2016, software-related recalls have gone from less than 5 percent of recalls in 2011 to 15 percent by the end of 2015.

Cars getting bogged down in code?

SSR points to the sheer volume of software code that interfaces vehicle components, many of them developed to different protocols. While there are about 9 million lines of code in an F-35 fighter jet, today’s cars can contain up to 100 million lines, the firm says.

The research firm J.D. Power, through its Safety IQ application, found that there have been 189 distinct software recalls issued over five years—covering more than 13 million vehicles. These weren’t merely interface-related issues either; 141 of these presented a higher risk of crashing. 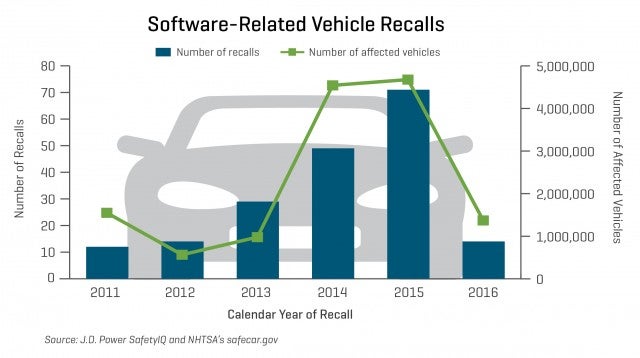 Software in cars is a growing reason for car recalls

Hardware issues taken along for the ride

SSR found that, increasingly, hardware and components are affected, too—whether for failure to communicate with software, or for physical wear brought about by software-control issues.

Only three software-related component groups were involved in recalls in 2011, but by 2015 there were 20.

Although some automakers are now allowing remote or do-it-yourself upgrades of map date—and even infotainment connectivity, as Hyundai just introduced for Apple CarPlay and Android Auto upgrades—upgrading software has traditionally been done at the dealership level, where it requires service appointments and labor time.

Meanwhile J.D. Power’s 2016 Vehicle Dependability Study (VDS) found that a third of owners with a navigation-system issue had a software upgrade in the previous six months (of which 55 percent said the issue hadn’t resolved the nav-system problem).

Could over-the-air updates turn the tide?

So far Tesla Motors is the only automaker offering that. But if automakers can lay out a secure means of updating software systems—by perhaps making system architects, security experts, and code writers part of the vehicle-development process—then some of the disappointment of the vehicle recall could be replaced by the delight of a feature-added software update.