A system first made for robot navigation could give blind people the equivalent of a Braille head-up display, according to... 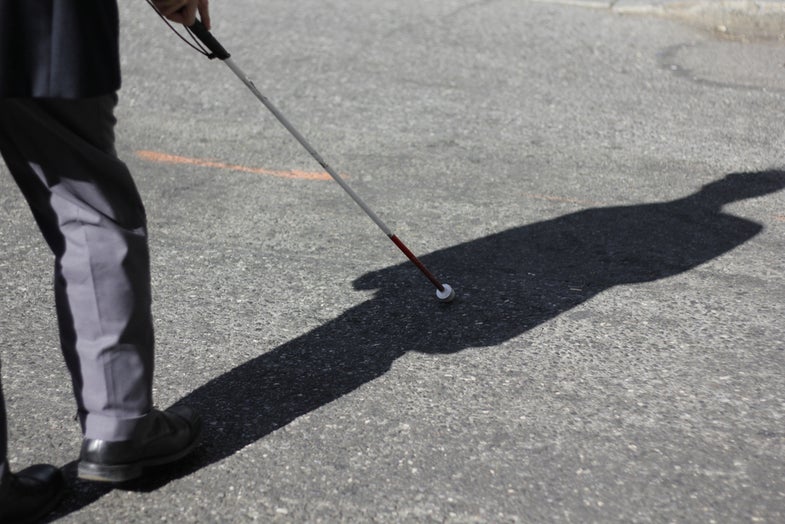 A system first made for robot navigation could give blind people the equivalent of a Braille head-up display, according to French researchers. Two cameras mounted to a pair of glasses generate a three-dimensional image of a person’s environment and their place in it, displaying the information on a handheld Braille device.

The goal is to help visually impaired people move around more efficiently without physical aids, according to Edwige Pissaloux of the Institute of Intelligent Systems and Robotics at the Pierre and Marie Curie University in Paris.

It uses two cameras on each side of the glasses to create a stereo image of the wearer’s surroundings, as New Scientist explains it. A computer system analyzes the scene to pick out walls or other features, and accelerometers and gyroscopes determine the user’s walking speed and other variables to determine his or her location in space. The system can create 10 maps per second, which are continually relayed to a Braille device and rendered as 3-D maps. The user can feel his or her way around via the map, rather than using a walking stick or other tactile feedback.

Plenty of tech tools can help blind and visually impaired people find their way, from sound navigation devices to robotic seeing-eye dogs powered by the Kinect. But this is a more interactive system that lets the person feel his or her way around, rather than relying on other sensory cues or on a real or robotic canine.

The system, which was based on a robot navigation device, will be presented at the IEEE International Conference on Robotics and Automation in St Paul later this month, NewSci says.