Says he's saving a seat aboard his Blue Origin rocket 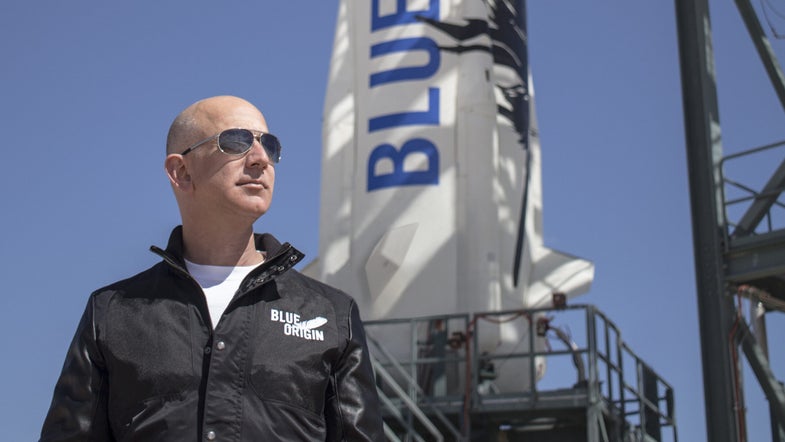 Business tycoon/reality-TV star/leading Republican presidential candidate Donald Trump caused the biggest controversy yet of his 2016 campaign on Monday evening, when his campaign released a proposal to bar all Muslims from entering the United States.

But hours before releasing that patently discriminatory plan, Trump took to Twitter to blast Amazon founder and Washington Post owner Jeff Bezos, erroneously claiming that Bezos was using The Post to receive a tax deduction at Amazon — despite the fact that the two entities are completely separate.

Bezos responded on his recently activated Twitter account with the humorous claim that he wanted to send The Donald to space aboard a Blue Origin rocket.

Blue Origin is of course yet another separate company Bezos owns, which recently made news for performing the first successful, vertical landing of a reusable rocket, after flying to the edge of Earth’s atmosphere. As Bezos tweeted (along with a link to a video of the rocket flight): “Finally trashed by @realDonaldTrump. Will still reserve him a seat on the Blue Origin rocket. #sendDonaldtospace”

As of the time of this article’s publication, Trump has yet to respond. But some would say the Republican presidential candidate is already out of this world (or perhaps — not living on Planet Earth).

Update: Jeff Bezos led a town hall meeting with Washington Post employees on Monday, February 1, 2016, during which he again reiterated his offer to send Trump to space. As Washington Post writer Alyssa Rosenberg tweeted, quoting Bezos at the meeting: “My offer to send Donald to space stands.”