Where airplanes go to die—and be reborn

Airplanes can be recycled, but it’s a lot more complicated than soda cans. 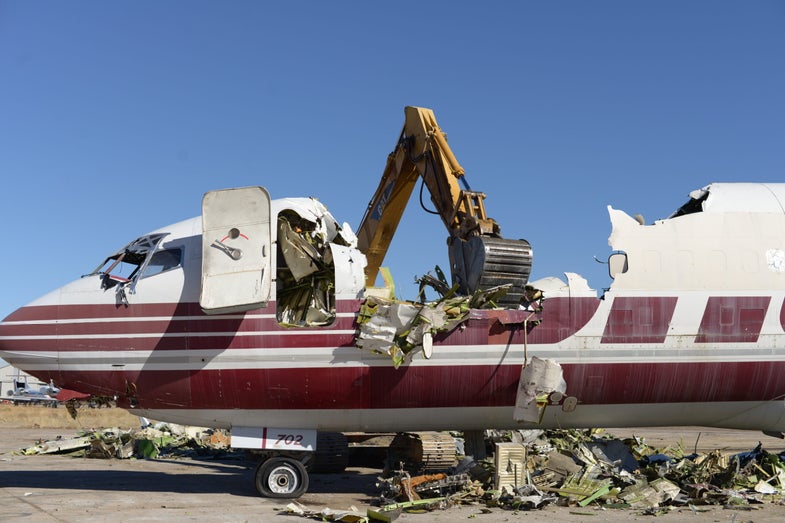 A typical plane flies for 25 years or so before it starts to wear out. When a plane is finally grounded, though, it doesn’t have to be the end of the line.

Storing retired airplanes is expensive, but chucking them into landfills isn’t environmentally friendly. That’s why special facilities exist to strip down planes and recycle the parts; there are several of these bone-yards in the United States.

Each plane is made of hundreds of thousands of pieces, and many of these can be salvaged to save money and cut down on waste. It takes about a month to take apart a typical airplane, during which time all the useful or valuable bits are plundered, leaving a metal skeleton to be chopped up by excavators.

Not every part can be reincarnated and not all planes are recycled. But with an estimated 12,000 aircraft due to retire in the next 20 years, there will be an influx of planes that must be shepherded into the next phase of their lifecycle.

Here’s how planes die—and how some of them are reborn.

When a plane arrives at a recycling facility, it is purged of hazardous substances like batteries, fuel, and oil. Draining these fluids before recycling ensures that nothing can leak into the ground and pollute the surrounding area.

Then the mechanics descend. “We take off all the good parts, then we crush up the plane,” says Tim Zemanovic, president of Jet Yard, a company that stores and disassembles airplanes in Marana, Arizona. The company recycles around a dozen planes a year.

Each plane has a maintenance manual with instructions on how to dismantle it. During the first stage of this unmaking, bolts and fasteners must be carefully removed so the plane can be taken apart piece by piece. The carcass is stripped of its black box, flight controls, air conditioning system, doors, and other assets.

Some parts, such as the engine, landing gear, and windshield, can find new homes on other planes after being inspected, cleaned, and sent out for repairs. In other cases, the cockpit can be turned into a flight simulator to train pilots, or the fuselage studied so aircraft manufacturers can improve future generations. Aircraft sections have even been sold to filmmakers so they can make a cameo role in movies. Others have wound up in museums or been turned into furniture, including a bar crafted from an engine cover.

For parts that cannot be reused intact, the aluminum, titanium, copper wire, and other materials must be picked apart. Eventually, excavators are called in to crush the empty hull for scrap metal. The crunched-up airframe is then ground up into tiny bits and sorted it into different metals.

Not all of a plane’s innards can be recovered. About 85 to 90 percent of an aircraft by weight can be recycled (Zemanovic’s goal is to reach 95 percent). But some materials are difficult to break down, or worth little money. For now, the insulation, carpeting, seat cushions, floorboards and wall or ceiling panels are usually sent to landfills. “The amount of labor it takes to strip out these things isn’t really worth the time,” Zemanovic says.

One challenge, he says, is that airplanes are built from many different types of materials stuck together, which is not ideal for recycling. Many other products, like aluminum soda and beer cans, are a simple proposition. “Beer cans become beer cans again, they recycle them and put them right back,” Zemanovic says. It’s a lot more work to separate the aluminum, stainless steel, and titanium of an aircraft.

Some newer planes, like the Boeing 787 Dreamliner, are made with carbon fiber. These mixes of carbon and plastic—are lightweight and enable planes to need less fuel. But it’s not yet clear how they will be recycled. “Ironically, the very composites that make an aircraft lighter and improve fuel efficiency are also very difficult to deal with environmentally,” the International Air Transport Association lamented in one analysis.

Other parts can be kept intact, but are both delicate and cumbersome. It takes a lot of planning to transport 40-foot-long flight controls, Ken Kocialski and Shawn Vaughn, founders of CAVU Aerospace, an aircraft dismantling company based in Stuttgart, Arkansas, wrote in an email. “These parts must not only be removed correctly but they must be packaged to survive shipping to all corners of the world.”

Usually an aircraft is flown to the bone-yard where it will be dismantled. But when a plane isn’t in good enough shape to make the journey, arranging transportation may become prohibitively expensive. Companies such as CAVU Aerospace and Jet Yard do travel to some of these stranded aircraft, although this can present its own logistical hurdles.

Flying into the future

There are no official rules to govern how planes should be recycled, says Michael Gill, director of the International Air Transport Association’s aviation environment department. Most companies are careful and responsible. But since there’s no mandatory worldwide registry for aircraft equipment, parts that are unsafe and beyond repair could potentially wind up being sold or reused in other planes. The organization is working to come up with standards for what should happen to aircraft after retirement, Gill says.

And planes aren’t really designed with convenient recycling in mind. “That’s lower down the list of importance—it has to be something that can fly and it’s safe and it will last a long time,” Zemanovic says.

Aircraft recycling is still a new field, says Samira Keivanpour, an industrial engineer at Laval University in Quebec. Until now, there hasn’t been much infrastructure dedicated to pulling planes apart and rehoming their parts. But it’s worth the effort to make sure that airplane recycling goes smoothly. Hundreds of aircraft are sent to landfills every year without being meticulously dismantled. Others are abandoned in desert graveyards, or parked on the edge of airfields, where they take up space and can make airports more congested, Gill says. And an airplane left on the edge of an airfield will eventually start to break down and could pollute the surrounding soil and water. “It’s not that we’re seeing day-to-day instances of problems arising,” Gill says. But the number of aircraft coming to the end of their working lives is on the rise, which means more opportunities for safety or environmental issues.

As the number of people who want to fly each year continues to increase, more planes will join the world’s fleet and eventually retire. “There will be a steep rise in the number aircraft due to come out of service,” Gill says. This year, around 500 planes will be dismantled; by 2030 that number may be closer to 2,000 planes per year, Kocialski and Vaughan say.

Eventually, engineers hope to deal with the onslaught by designing airplanes that are 100 percent recyclable. For now, there’s still a lot to learn during airplane recycling. Each of these huge, immensely complex machines gets taken apart a little differently. “Nobody really knows everything about the airplane,” Zemanovic says. While prying them apart, though, we can get a peek at what made them tick.