What Comes After Solar Impulse?

The plane just finish a solar-powered journey around the world. Where do the technology and vision go from here? 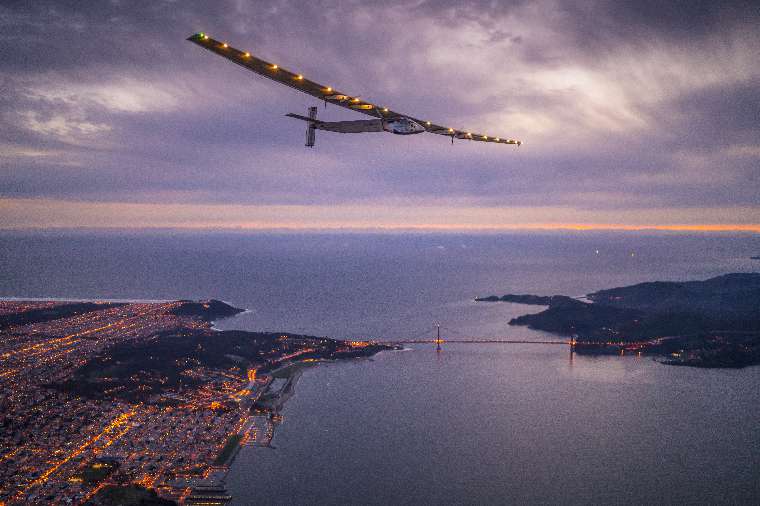 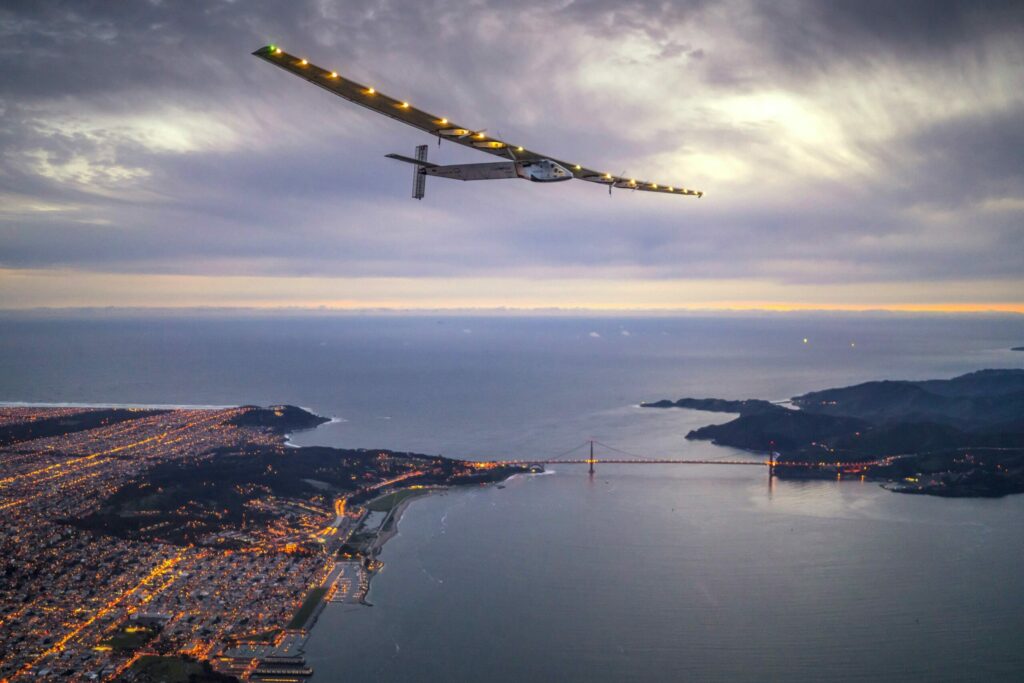 Last month, Solar Impulse II achieved something that no other airplane had ever done before. It flew around the world without using a drop of fuel, powered only by the sun. In the roughly 25,000 miles that it flew, Solar Impulse made two record-breaking ocean crossings, and traversed Europe, Asia, and North America. The two pilots, Bertrand Piccard and André Borschberg, endured temperatures in the cockpit that swung between -40 and 104 degrees Fahrenheit.

Since Piccard and Borschberg’s first solar powered flight across the United States in 2013, they’ve developed seemingly unlikely partnerships with corporations eager to participate in an environmental dream, built a prototype solar plane that functions as a flying laboratory, and nurtured the idea that being environmentally friendly doesn’t have to be depressing or expensive.

It’s a remarkable achievement. There’s only one question now: what comes next? How can those achievements keep flying forward now that the Solar Impulse II is back on the ground? 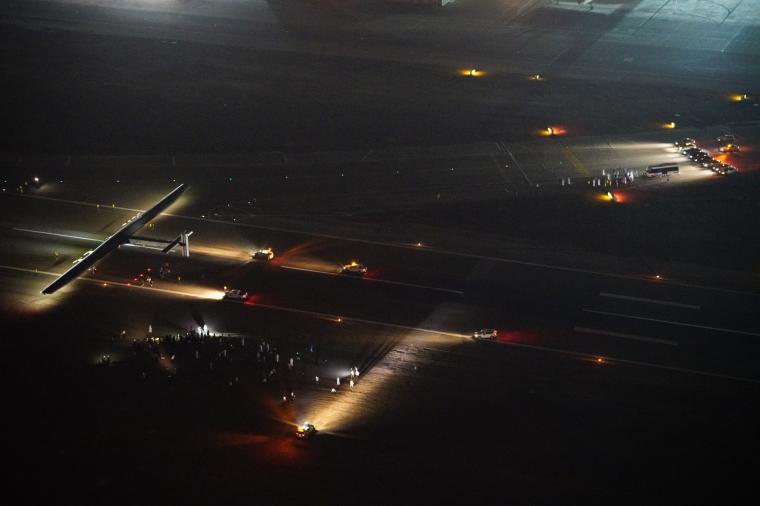 On the ground again in Abu Dhabi

A ‘Who’s Who’ Of Partnerships

Along the long journey, the pilots formed partnerships with governments and environmental advocacy groups who saw a partner in the push to reduce carbon emissions, and were naturally aligned with the project’s mission hashtag: #FutureIsClean. But the Solar Impulse project also attracted a huge list of corporations that bought into the idea espoused by Piccard while he was in New York: “Energy efficiency is always profitable.”

The team’s corporate partners included a “who’s who” of names from a variety of industries. Companies with their name on the plane included watchmaker Omega, Google, Moët Hennessy, ABB, Covestro and many others. Not all contributed technology to the plane itself, but all were eager to be associated with a positive message that was flying around the entire world. Celebrities like Secretary General of the United Nations Ban Ki Moon and billionaire Richard Branson called in to the cockpit, happy to chat about the possibilities of a cleaner, greener future while the flight was being broadcast to the world.

These companies’ green push might seem to the cynical to be a form of greenwashing, making the sponsoring company seem more environmentally friendly without making big changes to their practices. And the image boost to being associated with a zero-fuel airplane is undeniably appealing to corporate sponsors. But many companies, spurred on by a changing public opinion and increasing government regulations, are also seeing that there is real value in looking for ways to reduce pollution and make their business practices more energy efficient.

While the logos on the side of Solar Impulse are the most visible sign of this corporate turn towards the environment, it isn’t the only area where partnerships are being formed. At the signing of the COP 21 climate agreement (also known as the Paris Agreement), Ban Ki Moon told the assembled leaders, ambassadors and guests that the “private sector is essential” to meeting the world’s goals of reducing greenhouse gasses in an effort to stem the tide of global warming.

“A lot of that has been brought on by pressure by civil society or with new government legislation coming into place, and actually, that’s not a bad thing,” says Richard Northcote, Chief Sustainability Officer at Covestro, a spinoff of German company Bayer.

“When you look at pressure being put on industry in the right areas it drives innovation,” says Northcote. “If you look at all the innovation that happened because the US space program and the Russian space program were really pushing ahead, it threw up so many new technologies because of the pressure everyone was under. When you find yourself in this place, and you put the right resources and R and D into innovation, who knows what we’re going to come up with next?” 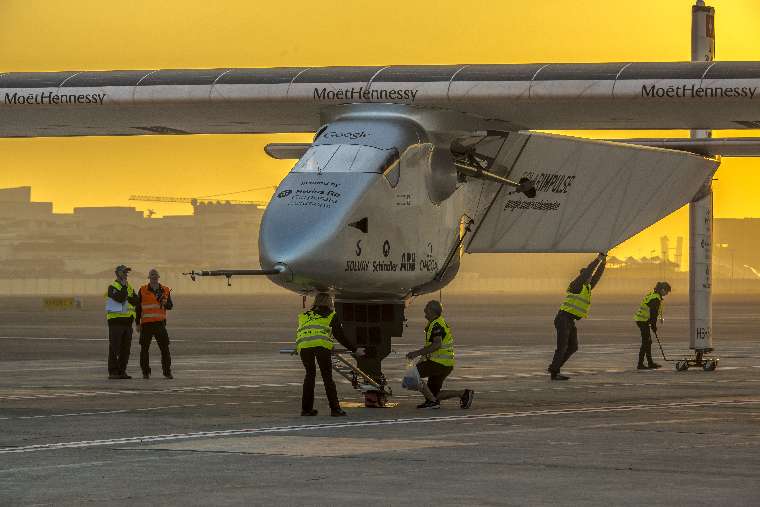 From The Plane To Refrigerators

Policy and corporate support alone won’t make the future cleaner. For that, the world needs to also mix in some new technologies to make the mission easier.

The 236-foot-wide Solar Impulse II weighs only 2.3 tons (the weight of an average car, despite having a larger wingspan than a Boeing-747). It’s a prototype, one that Piccard and Borschberg are fond of linking to other pioneering aviation prototypes, including the early planes built by the Wright brothers.

Some new technologies were required to bring the plane to life, and a few of the corporate sponsors helped develop technology to make the flights possible. One of these was Covestro, the company that Northcote works for.

“The whole drive for the plane was to get it as light as possible,” he says. “The lighter it is, the less energy you need and the more successful you’re likely to be.”

Covestro, which already made insulation foams, made a new microcell insulation foam for the plane’s batteries and door, a clear polycarbonate that stood in as a lighter substitute for glass, and the cockpit itself. “It’s basically a polyurethane shell, it’s so light,” says Northcote. “You can lift the whole cockpit with one hand.”

The insulation, which protected the pilots from the worst of the temperature swings in the unpressurized, non-climate controlled cockpit, is highly efficient, and could help refrigeration units use less energy to keep food cool, especially in hot climates, where food is more likely to spoil.

A Laboratory Of Ideas

As much as Solar Impulse II was touted as a flying laboratory, there weren’t that many brand new technologies or objects actually being tested in the construction of the plane itself. Most of the technology used to construct the plane were materials that are already available now. And that’s the whole point. The materials that made Solar Impulse’s record-setting achievement possible are fully available today. It’s just a matter of fitting them together, and improving on them.

Solvay, a chemical company, had 15 products used onboard Solar Impulse II, all of which were already on the market in some form. But the flight around the world allowed the company to test how well their products fared over long periods of time in some of the most intense environments in the world.

“All the products and solutions developed for SI are already on the marketplace. This is why we say this has been for us a flying lab, accelerating our R and D process,” Claude Michel Head of the Solvay Solar Impulse Partnership, told Popular Science in an e-mail.

While Solar Impulse II may be a prototype, it is not a wild piece of future technology–it is a challenge.

Paige Kassalen, an engineer on the Solar Impulse team, remembers giving a tour to some VIPs in Phoenix and watching a woman tell her son, “Pay attention, this is the last time you’ll see this.”

“My immediate reaction was ‘No, this is going to be the future,’” Kassalen says. “‘This is hopefully not the last time he’ll see this, this will be the norm for him.'” 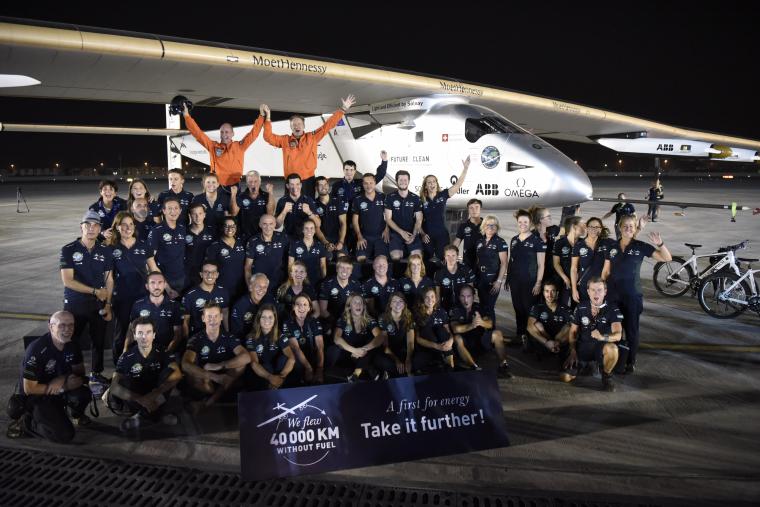 Piccard hopes that in 10 years electric planes will be ferrying loads of 50 passengers on short-haul flights, with the near silent engines and lack of pollution making it easier to land airplanes even closer to dense population centers.

It’s not just a pipe dream. While the Solar Impulse II could only carry a single person (the pilot), and required a huge global network of employees, flight controllers, and even a mobile hanger for the plane, other planes might be able to push further into the aviation market. That’s especially true if their batteries only have to make a regional flight, and not an ocean crossing. Earlier this year, NASA announced the development of an all-electric plane nicknamed Maxwell.

In addition to other planes under development, Solar Impulse II will also continue to be used. The round-the-world trip took about 700 hours of flight time, leaving approximately 1300 hours still available in the life of the plane. Borschberg writes that the hope is for the plane to remain a flying laboratory, eventually being upgraded to an autonomous flying vehicle, able to push the capabilities of the plane, without needing fragile human bodies (which require sleep, food, and can sometimes get sick) in the pilot’s chair.

But beyond reducing airline emissions by creating electric planes (airlines alone generate roughly the same amount of CO2 as Germany), Solar Impulse founder Piccard is also pushing for a change in mindset, promoting a manifesto that focuses on environmental solutions that don’t involve dwelling on the impending horrors of sea level rise, heat waves, and rapid climate change.

Instead, Piccard and others espouse the belief that those almost inevitable changes might be forestalled by emphasizing renewable energy, energy efficiency, and education. The idea is to provide an alternative to asking people to give up travel or products that they normally use, instead asking that they simply substitute cleaner options that already fit with their lifestyle.

Piccard and Borschberg have also established the International Committee of Clean Technology which they hope will be a think tank that can help governments and companies incorporate clean technology into their ventures.

“Until recently, protecting the environment was expensive and threatened our society’s comfort, mobility and growth. Today, thanks to modern clean technologies, the energy consumption of the world, and therefore the CO2 emissions, could be divided by two, while creating jobs and enhancing profits. The International Committee of Clean Technologies will work in this direction,” Piccard said.

Ultimately, the odyssey of Solar Impulse remains an important first step in a very long and difficult journey towards a cleaner tomorrow, and it will take more than Piccard and Borschberg to make it a reality. Kassalen, who came to the project as one of her first assignments after she graduated from Virginia Tech, is a part of the generation who might carry the torch forward and make sure that the #FutureIsClean.

“I’m very excited for the future, especially after joining this project,” she says. “I feel like this has opened my eyes to how we can be doing so much more.”