Infrared Radiation Can Fine-Tune The Taste Of Whiskey

Just blast the barrels with the right wavelength of light 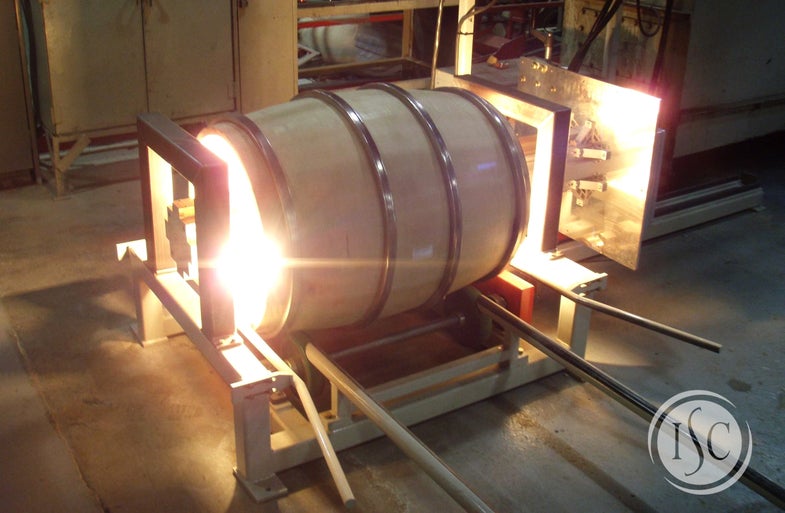 For several years, the Buffalo Trace distillery has been running experimental variations on the age-old bourbon-making process, changing one production parameter at a time to taste how it affects the final whiskey. They’ve altered the ratio of grains distilled, the type of wood used in barrels (French oak versus the standard American oak), the sizes of barrels (as small as 5 gallons compared to the usual 53 gallon ones), and even compared barrels made from either the top half or bottom half of a single tree. Most of the resulting whiskies (the ones that weren’t complete failures) were released under the distillery’s “Experimental Collection” series, allowing bourbon nerds a chance to taste the science experiments.

This week Buffalo Trace launched its latest experiment: bourbon aged in barrels that had been blasted with infrared light. The barrels were made by Independent Stave Company in 2009, and whiskey was poured in and aged for six and a half years.

According to a press release:

Harlen Wheatley, Buffalo Trace’s master distiller, says that the idea behind the experiment was “just to see if [infrared toasting] would capture different flavors in the charring, which it did.”

Brad Boswell, president of Independent Stave, explains: “We heat the staves to make them malleable prior to bending them to form the shape of a barrel. We can heat the staves up using steam, using a wood fire, or using an infrared heat source. Each method will make for a barrel with slightly different organoleptic characteristics. Depending on the organoleptic properties we’re seeking, we can apply one of many toasting options to barrel prior to charring.”

The infrared barrel toasting technology is relatively new (a 2008 patent application is for a mobile version), and is currently being employed for making wine barrels. Boswell says, “This toasting technology allows for precision toasting and temperature control while imparting zero smoke from the heat source,” as wine makers don’t like the charred or smoky-tasting barrels that whiskey makers do.

Boswell continues, “Our coopers like to call the infrared toaster ‘sun on a stick.’ It is a horizontal apparatus that is inserted into the barrel before the ends, or as we call them ‘heads,’ are put on the barrel. The energy from the short wavelengths and long wavelengths toasts the inside and the surface of the staves at different rates. We can create a very hot surface with a relatively cool interior or we can create a more homogenous temperature. For the Buffalo Trace experiment we used the infrared elements and power levels we thought would provide them the best-tasting bourbon.”

Distiller Wheatley said that though their goal was not to make a shortcut bourbon that was aged in less time, “They seemed slightly ahead of normal cycling and slightly more woody character to me. Some [of the other members of the tasting panel] just said there was more complexity or flavor in general. To each their own on that.”

The press release describes the difference between the two infrared-toasted bourbons:

Wheatley views the experiment as a success, and says it might lead to more infrared experiments in the future. “We don’t share a whole lot on future plans,” he says, “but it’s safe to say it is in the mix.”