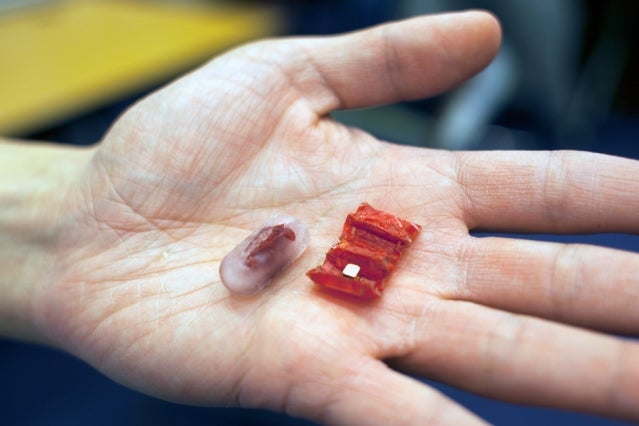 Scientists have created a tiny, ingestible robot made from pig intestine that might be able to retrieve swallowed objects without surgery.

The robot is built from a magnet attached to folds of dried meat typically used in sausage casings. It needs no tether or power source, instead being guided by magnets outside the body. Though swallowed in an ice capsule, the robot unfolds inside the stomach as its casing melts.

Scientists from MIT, along with collaborators in the UK and Japan, recently tested their meat robot’s ability to retrieve a button battery, like the kind used in watches. The team bought a pig stomach and used it as a guide to design a silicon cross-section of the stomach. They filled the model stomach with water and lemon juice to stand in for stomach acid, then dropped in the button battery.

The team successfully shepherded their robot to the battery, which it scooped up with its own magnet. It’s a useful finding, as more than 3,500 batteries are swallowed each year in the United States, which can lead to burns in the stomach. The researchers think the origami robots could help to move the battery through the digestive system faster, before it has time to break down and start leaking.

Eventually, these origami robots might also be used to patch wounds or deliver medicine. The scientists want to add sensors to the meatbot and redesign it so it can crawl through the body without help from magnets.