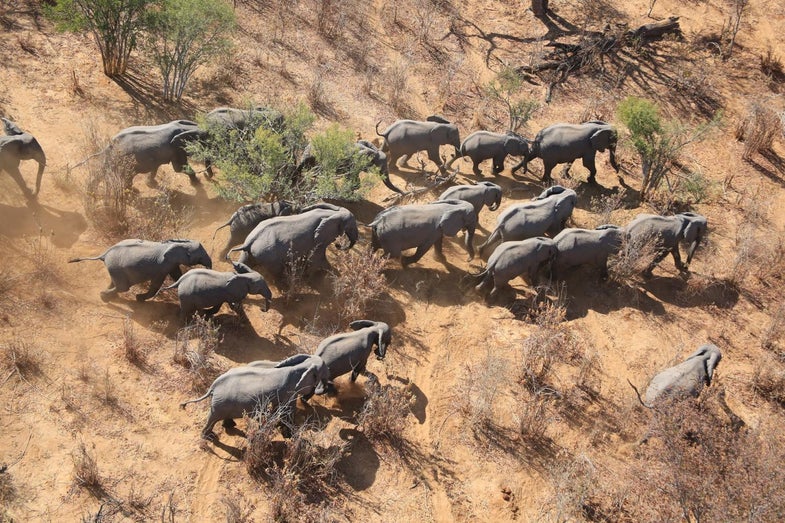 A multinational team has undertaken the first continent-wide survey of African elephants, and the findings are deeply concerning. The Great Elephant Census, which so far includes 18 countries, indicates that the population of African savannah elephants is plummeting 8 percent every year.

“These dramatic declines in elephant populations are almost certainly due to poaching for ivory,” wrote the researchers, who are drawn from conservation groups, government agencies and universities in the United States, Europe and Africa. The findings were presented this week at the World Conservation Congress in Honolulu, and published August 31 in the journal PeerJ.

The team focused on the largest and densest elephant populations, and counted both living elephants and carcasses from planes and helicopters. Together, they spent over 1,500 hours in 2014 and 2015 observing the animals over about a quarter of their range. Overall, the census yielded a population estimate of 352,271, which the researchers believe accounts for 93 percent of the savannah elephants in the countries they scoped out. Botswana held 37 percent of the elephant population, Zimbabwe 23 percent and Tanzania 12 percent.

Data from older estimates in fifteen of these countries indicate that elephant populations were actually on the rise between 1995 and 2007. But amidst a renewed outbreak of poaching, the population dropped by about 144,000 elephants, or 30 percent, between 2007 and 2014. The researchers calculated that, continent-wide, the population plunged by 8 percent every year between 2010 and 2014. If this keeps up, the areas included in the census could lose half their savannah elephants every nine years, and the elephants may soon vanish entirely from some areas.

“For too long now, we’ve said that we don’t have precise, reliable estimates—that they’re speculative, they’re guess work,” coauthor Mike Chase, founder of Elephants Without Borders, told National Geographic. “We’re now armed with the most robust and accurate scientific data in history to give these animals a second chance.”

The team plans to expand their census to South Sudan and the Central African Republic by the end of the year. Namibia was the only country with a large population of savannah elephants that was not part of the census. The census also did not include African forest elephants, which live in central African rainforests and may be a separate species. But poaching and habitat loss have imperiled these elephants as well. A separate demographic study published August 31 in the Journal of Applied Ecology indicates that forest elephants reproduce so slowly that it will take nearly a century for the population to recover from the poaching that has plagued it since 2002.