It's been right under our noses for years, and we never noticed it. 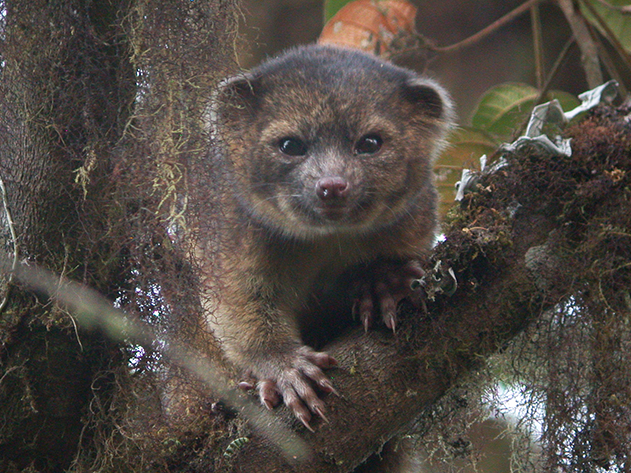 We don’t discover new mammals very often, let alone new mammals in well-known families like Procyonidae (which includes the raccoons, coatis, and ringtails). So we are very pleased to introduce you all to the newest member of the family. Everyone, say hello to the olinguito (pronounced oh-ling-GHEE-toe).

The olinguito, as its name suggests, is highly similar to another member of the raccoon family, the olingo, an arboreal, nocturnal animal that looks more like a combination of a possum and a monkey than a raccoon. In fact, says Smithsonian, there was actually an olinguito in American zoos in the 1960s, kept in cages with olingos. “Its keepers were mystified as to why it refused to breed with its peers,” writes Joseph Stromberg at Smithsonian. But now we have proof as to why: a new study published today in the journal ZooKeys has established through DNA and other anatomical evidence that the olinguito, Bassaricyon neblina, is a distinct species. No wonder it didn’t mate with an olingo!

The olinguito looks fairly similar to the olingo, but its fur is a totally different color; olingos have dull gray fur, but the olinguito has reddish-brown fur. Kristofer Helgen, curator of mammals at the Smithsonian National Museum of Natural History and author of the paper, stumbled on some olinguito skins while researching the olingo, in South America. It’s slightly smaller than the olingo, about 14 inches long and weighing about two pounds, and eats mostly fruit, supplemented with insects. It lives in the high forest of Ecuador and Colombia–delightfully called “cloud forests”–and rarely comes down from the trees, adept as it is at leaping around the branches.

Researchers aren’t sure whether the species is at critical risk; Helgen estimates that 42 percent of its possible home territory has been deforested, so he says “there is reason to be concerned.”

Helgen thinks there may be up to four subspecies of olinguito roaming around the forest, which is pretty much unheard-of for a mammal discovery at this time in history. “I honestly think that this could be the last time in history that we will turn up this kind of situation—both a new carnivore, and one that’s widespread enough to have multiple kinds,” he said.

Read more about the olinguito over at Smithsonian.