Take a look in a book. 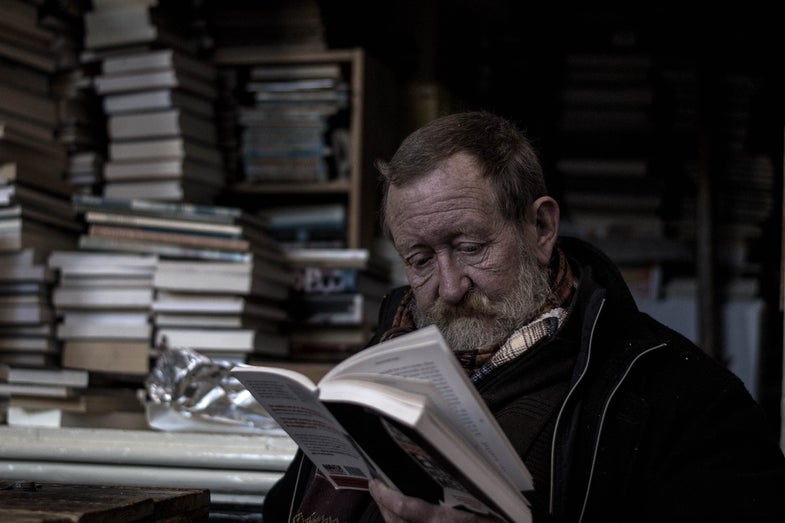 You can teach an old human new tricks. Pexels
SHARE

The phrase, “reading is fundamental,” is a slogan, a meme, and the name of a children’s literacy nonprofit. For those of us who can read, especially with a fluidity that feels almost like an extension of our own thinking, the expression’s rationale is simple: the foundation of our composed world is the written word. After all, the ability to read is necessary to send a text, apply for a job, or even to identify our favorite products after they’ve undergone yet another rebranding. Illiteracy in the modern world is like trying to navigate the high seas with neither a knowledge of the stars, a map or a compass—possible, but needlessly difficult. But new research suggests that learning to read does more than make life easier: it literally changes how the brain works by increasing connectivity between its regions.

“We’re trying to understand the basic principle of how the brain works,” says Falk Huettig, a researcher in the department of psychology of language at the Max Planck Institute for Psycholinguistics. “One good way to figure out how the brain works is to look at cultural inventions, things like reading that are fairly recent in the history of humans.”

Huettig also notes that if we understand how reading is acquired and how the brain changes as we learn, we can also figure out what brain differences might cause conditions such as dyslexia, for example.

Reading is especially interesting because it’s complex. It requires pattern recognition, and decoding symbols to create a meaning. Take, for example, the word blue. To read it, you have to recognize each letter, what they mean when placed in this order, and relate that coded message to the color that exists in the real world—in milliseconds.

To understand how reading affects the brain, Huettig and a team of researchers took two groups of illiterate Hindi-speaking Indian adults in their thirties and matched them for gender, handedness (right handed vs left), income, number of literate family members, and intelligence. Adults were used instead of children because kids’ brains are incredibly flexible—it’s why they learn languages so much more easily than adults can—and they’re constantly learning new things, which makes it harder to pinpoint which brain changes might relate to each new skill.

Both groups had their brains scanned in an fMRI machine, to get a base level understanding of how their brain worked. Afterwards, one group undertook six months of literacy instruction in the Devanagari script, a writing system used for several languages including Hindi. The other group received no such instruction. After six months, the researches scanned their subjects again.

By tracking blood flow to different regions of the brain, the researchers discovered that the group who had received literacy changes exhibited noticeable differences in their brains. Parts of the cerebral cortex, the outer layer of the cerebrum that plays a role in memory, attention, thought and, yes, language, changed, though that was not wholly surprising. Previous studies had shown that parts of the cortex change when we learn to read.

What was surprising, however, was that there was also increased functional connectivity between deeper regions of the brain including the occipital lobe (which plays a role in visual processing).

“It hasn’t been shown before that even these very deep structures in the brain that are evolutionarily old still change fundamentally, and adapt to this new skill, and start to communicate effectively with parts of the cortex like the visual cortex,” says Huettig.

Huettig’s study also suggests that some previous research on dyslexia might be wrong. Some studies pointed to abnormalities in the deep structures of the brains of people with dyslexia as a cause of the reading disorder. But in Huettig’s research, the first round of brain scans showed some of those abnormalities—that is, the illiterate adults had brains that looked a lot like those of dyslexics—but in the group that learned to read, those abnormalities went away.

“What our study suggests is that these changes in the deep structures of the brain have much more to do with learning to read,” says Huettig. “These differences between people who can read well and people who cannot read well are not the cause of dyslexia.”

There are of course some limitations to the study. For example, it’s hard to tell the degree to which the visual system kicked in, because Devanagari script is an incredibly visual language.

“We do know that there’s a core reading network that always kicks in no matter what kind of writing system people learn [even brail],” says Huettig, “but there are other additional parts in the brain that change depending on what kind of writing system is acquired. For example, if you learn Chinese, then you know that the right cortex gets more activation—probably because these characters are so much more complex.”

Similarly, while several studies have shown learning to speak a second language can improve brain resilience—staving off diseases like dementia in later in life—how learning to read and write a wholly different character system has been studied less. The institute is currently researching how the reading networks of Dutch people change when they learn something like Arabic, Chinese, or music notation, but that research is still ongoing.

But even for those of us who can already read, the study suggests that adults brains are still quite adaptable.

“Even later in life you can still learn very complex things like reading, which is not an easy skill for someone who has never tried to read before,” says Huettig.