"Danny Boy" from space is just one of many Hadfield highlights. 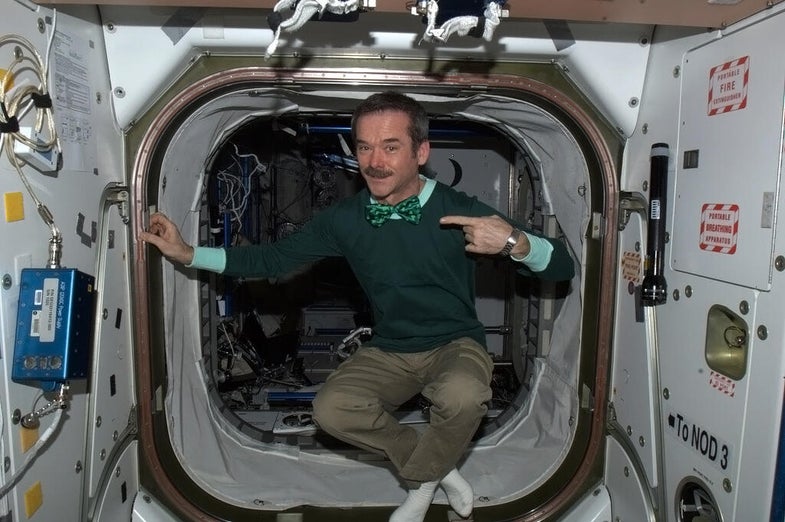 Lots of astronauts living on the International Space Station are prolific tweeters and photographers. But every few missions or so, someone comes along who really gets it, and shares the experience of life in space better than most. Like the station’s newly minted commander, Chris Hadfield. Go here to follow him on Twitter.

He has been on the station since December, but took the helm late last week. Hadfield held his first press conference as commander on Monday morning. Half of his interview was in French–oh, Canada–but the parts in English were a reminder of why he’s been so much fun to follow on Twitter and SoundCloud. He played a stirring rendition of “Danny Boy” on St. Patrick’s Day, for instance.

If he were to take someone on a tour, he would bring them first to the ISS cupola, the big window on the world, “so they could truly see our Earth,” he said, “the power of it … the size of it, the beauty of it, and the inherent fragility of it. When you see the blackness and emptiness of space… and the one layer of onion skin atmosphere that surrounds our planet, it becomes so vivid in your mind. It permanently changes your thinking.”

Hadfield is the first Canadian commander of the ISS, a source of enormous pride for our neighbor to the north. His leadership marks only the second time ever that the 12-year-old station has not been helmed by someone either American or Russian.

“It’s a huge honor and a privilege for me, but also for all the people at the Canadian Space Agency and for my entire country,” he said.

Hadfield took over before past commander Kevin Ford and cosmonauts Oleg Novitskiy and Evgeny Tarelkin departed for Earth last Friday. He’ll lead a three-man crew until NASA’s Chris Cassidy and cosmonauts Pavel Vinogradov and Alexander Misurkin arrive later in March. Hadfield, astronaut Thomas Marshburn and cosmonaut Roman Romanenko have been on station since Dec. 21 and will come home in May.