Why Is Ted Cruz’s Face A Meme? 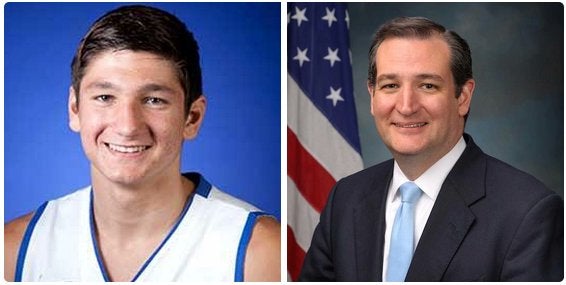 If you believe random people on the internet, Senator Ted Cruz (R-Texas) may be the Zodiac killer, the lead singer for an 80’s Christian hair metal band, an awkward character from The Office, and everyone’s favorite collegiate basketball villain.

Currently second place in the Republican primary delegate count, Cruz has been an easy target from this cycle’s insult king, GOP front-runner Donald Trump. While Trump questions his citizenship and calls Cruz the “single biggest liar,” there are, however, some unflattering comparisons not coming from Trump, a Super-Pac or off their rockers talking head. Cruz’s face has been compared to the faces of numerous other famous figures or athletes. And there’s more to that fact than just Twitter having fun. In fact, there’s facial recognition science as to why people associate Cruz’s face with so many other people.

“I love the one with the guy from Stryper. That’s so great,” Dr. Benjamin Balas, Associate Professor Department of Psychology, Center for Visual and Cognitive Neuroscience at North Dakota State University, told PopSci. “ I think there is a lot of similarity with the eyebrows.’

Balas cited a study of celebrity facial recognition tests that showed eyebrows were nearly as crucial as the eyes by erasing the eyebrows of celebrities in a set of photos. Subjects were then quite bad at naming the correct individual.

“It’s really a complicated system and it involves a number of different grey areas (but) visual recognition is something everybody is really good at,” Duchaine said. “It comes built-in with the brain. We’re capable of doing face processing just minutes after being born.”

Balas, who has done research on how social interactions can influence face perception and memory, said it’s amazing the type of information humans can draw from a quick glance of someone’s face.

“We can measure all these things about people; sex, age, emotion, who they are… even make judgments about how much we should trust them really quickly,” Balas said.

Although we can judge a lot of information quickly, we often get facial recognition wrong with people we are unfamiliar with, Balas said. The two main errors, he said, are when subjects are shown separate pictures of two different people and then a subject claims it’s the same person or when a subject is shown two pictures of the same person but then falsely says it’s a different individual.

While the second error is far more common, Balas said the first error is likely why people falsely associate Cruz’s face with other people.

“That’s the mistake people make a lot with unfamiliar faces,” Balas said. “Two different pictures of the guy from the band and Ted Cruz, (we can say) ‘those pictures are of same person.’ You get tripped up with unfamiliar faces, it’s almost like a believable thing… That’s a face recognition error we make, that I can be tricked that way.”

Algorithmia, and company that builds algorithms for developers and apps, recently created a facial recognition algorithm that during the initial testing used pictures of U.S. presidents (not any current candidates) to see how well it recognized notable people.

The company wanted “to see if could distinguish Bill Clinton for George Bush,” Algorithmia CTO and Founder Kenny Daniel said. “And actually, it had a pretty hard time because the U.S. Presidents are all kinda homogeneous, all sort of older white guys.”

With its facial recognition testing struggling to correctly identify past presidents, Daniel said they began testing photos of a much more diverse set of people — the characters from Parks and Recreation.

The show “has a very distinctive cast, some females, males, skin colors and styles of people,” he said. “And (its facial recognition test) was almost flawless that time.”

The generic vs. unique faces could be a reason why Cruz’s face is on so many memes today.

“If I had to guess I would say his face probably just lacks distinctive features,” Daniel speculated. “Donald Trump has a very distinctive appearance to him; the hair, face, the mouth, nose and eyes are fairly distinctive and easy to recognize, whereas there are not as many distinctive features (for Cruz), just generic brown hair, normal looking face. It’s the sort of thing, if a person (has) a hard time distinguishing him than an algorithm would also have a harder time.”

While there’s science behind how and why humans use facial recognition, there unfortunately have not been scientific studies as to why Cruz looks like the sketch of serial killer or an 80’s singer. That doesn’t mean, however, the facial recognition experts don’t have a favorite Ted Cruz look-alike meme.

“If we’re talking about political figures, there’s absolutely just comedy gold there,” Balas said. “It’s everything from the Christian metal guy to the Count from Sesame Street. To some extent (however) that’s not really visual, it is kinda funny, a parody.”

As Duchaine was talking about how the eyes are an important feature for facial recognition he looked at a side-by-side of Cruz and the Zodiac killer facial composite and concluded, “Ted’s eyes look pretty similar to the sketch.”

So there you have it, very unscientific evidence from distinguished facial recognition experts that Cruz is without question definitely, likely, probably, unlikely, 100 percent not the lead singer for Stryper, nor the Zodiac killer.