Counterfeit drugs are putting the whole world at risk

Even if you don't buy the fake pharmaceuticals yourself 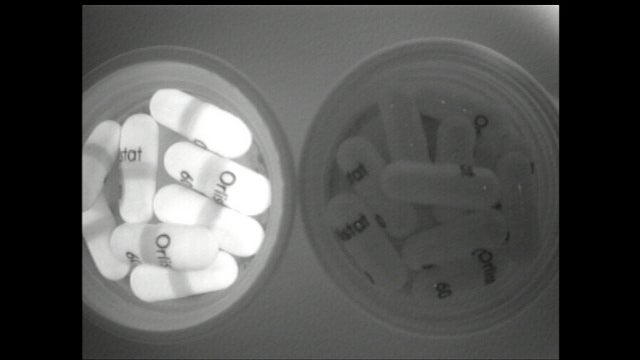 Authentic (right) and fake (left) weight loss drugs, revealed by a scanner the FDA invented to detect medicines that have been falsified by criminals. US Food and Drug Administration
SHARE

In December 2014, the Democratic Republic of the Congo’s Ituri District saw an outbreak of what appeared to be meningitis. By August, more than 1,000 people had been admitted to clinics, and health workers knew there was something else afoot.

What had at first seemed to be neck stiffness—a common symptom of meningitis—proved to be muscle spasms caused by a mislabeled medicine. An investigation, reported this month in The Lancet Global Health revealed that people had been purchasing tablets they thought were diazepam (the generic name for Valium). But the tablets actually contained an antipsychotic drug called haloperidol, which can prompt involuntary contractions in the face, neck, and arms that are alarming, though rarely life threatening. It’s likely that these medicines had been deliberately falsified, the authors concluded.

This puts them in a lot of bad company. Medicines that are of poor quality—or entirely fake—pose a serious public health threat. They pop up in every corner of the world, although they are much less common in industrialized nations. “Substandard and falsified products are manufactured in all countries, and they’re available in all countries in varying levels, but everyone’s on it basically,” says Pernette Bourdillon Esteve, an analyst for the World Health Organization’s Global Surveillance and Monitoring System.

No type of medicine, from expensive and groundbreaking treatments to everyday antibiotics or birth control, is immune. These medicines might have the wrong amount of the active ingredient (or none of it at all), or contain a different drug or other materials such as chalk or cornstarch. They can also be contaminated by bacteria or unknown impurities. Sometimes, a product isn’t up to snuff because it wasn’t manufactured or stored correctly. But often, they are intended to trick people.

Sometimes these drugs simply fail to deliver effective treatment, but they can also cause outright harm. And in the case of drugs meant to combat infection, having some but not enough of the necessary dose of the active ingredient actually helps contributes to antimicrobial resistance.

Fortunately, there are a few things that can be done to fight these deceptive drugs. Around the world, companies and organizations are coming up with better technology to screen for fakes, collecting and sharing information about the problem, and working with people in developing countries to thwart fraudsters.

“There’s no silver bullet,” Bourdillon Esteve says. “You need to have a wide panel of solutions.”

Stopping the influx of these faux medications isn’t a simple prospect. In the United States, “The majority come from purchases on the Internet, which is an unregulated and unsecure supply chain,” says FDA Special Agent Daniel Burke, senior operations manager in the organization’s Cybercrimes Investigations Unit. And antimicrobial drugs aren’t typically on the menu. “Antibiotics aren’t generally all that expensive; why would I counterfeit or make a substandard version of tetracycline when I can make a ton of money by selling [the hepatitis C treatments] Sovaldi or Harvoni?” Burke says.

In developing nations, it’s another story entirely. Antibiotics and antimalarial medicines are among the drugs most commonly affected and reported to the WHO. Fake and poor quality medicines thrive in countries that lack strong regulations or oversight from organizations like the U.S. Food and Drug Administration. In these areas, it’s also more common for people to be unable to find or afford the medicines they need. “If you desperately need a life-saving medication, and you can’t find it in your secure and reliable sources…you might procure it from unreliable sources,” Bourdillon Esteve says.

It’s hard to know the full scope of the problem. “Criminals don’t usually fill out tax declarations on how much they make out of this traffic,” Bourdillon Esteve says. “Like with drug trafficking, like with arms…the hard validated evidence is tough to get.”

And most people who are taking shoddy or bogus drugs don’t realize it. Often, “the physician or provider simply just switched to another medicine,” says Jude Nwokike, Director of the US Pharmacopeial Convention’s Promoting the Quality of Medicines Program. “That’s often not reported, that often doesn’t even lead people to suspect and send the product for quality analysis.”

WHO has withdrawn its earlier estimates about the scale of this problem for lack of hard evidence. However, it is compiling reports from the global surveillance and monitoring system it set up in 2013, and plans to publish a new assessment this year. In the meantime, the organization is looking for patterns that reveal which drugs and regions are vulnerable, and raising alerts and emergency assistance when it discovers a new threat.

And physicians can check the database to see if a product was reported before, making it easier to prevent history from repeating itself. Already, this practice of collecting and sharing information has saved lives. In September 2013, more than 40 children and adults in Paraguay become suddenly and violently ill, with symptoms that included seizures and difficulty breathing.

A quick investigation revealed that they had consumed anti-cough products containing the same contaminated ingredient that had killed 50 people in Pakistan a few months earlier. All but one person survived. These people “were saved in 24 hours because we were able, through our database, to connect the dots,” Bourdillon Esteve says.

There are a few techniques that investigators and patients can use to sniff out bogus drugs. The cheapest way of detecting a problem is simply to inspect the medicine’s packaging, or qualities such as its color and shape. But in many cases, an imposter may appear indistinguishable from the genuine product.

Fortunately, certain portable tools can flag fakes or low quality drugs so a sample can be sent on to the laboratory for further investigation. Global Pharma Health Fund’s Minilab, a kit packed into in a suitcase, tests whether a drug contains the expected amount of active ingredients.

There are handheld devices, too. The TruScan device made by Thermo Fisher Scientific can confirm a drug’s identity from within its blister pack or glass vial. And the FDA’s Counterfeit Detector Device scans drugs and packaging with UV and infrared light. Caught in its beam, fakes look different from bona fide products, even to people with no training.

The pharmaceutical industry also uses 2D barcodes and labels with RFID chips. Startups are addressing the problem too. The Massachusetts-based company Sproxil offers scratch panels, which drug companies can stick on their products and a customer can later scrape away to reveal a unique code. They then text it to Sproxil to confirm that everything is is aboveboard.

And pills themselves can be given unique features to mark them as genuine. One idea is to stamp tiny indentations on a product to make a 3D barcode.

Still, in the case of the United States, it’s not easy to detect fakes in parcels that have been ordered online. These are sent through international mail facilities. “That’s not set up to do counterfeit detection…on a mass scale,” Burke says. “The problem is on the Internet and taking action against illegal online pharmacies is where the solution should be most focused.” He and his colleagues concentrate on investigating the major manufacturers and distributors these products pass through.

“Most of the time these falsified and substandard medical products are very difficult to detect,” Bourdillon Esteve says. “Screening devices, it’s only a first step, it’s kind of a triage system.”

Poor quality or falsified drugs may be purchased online or in street markets. But in developing countries, criminals often take another, even more insidious strategy to peddle their wares.

“The supply chain of a medical product…can be quite long between the moment it gets out of the factory and it reaches the patient,” Bourdillon Esteve says. It may stretch among several nations; a single drug may use ingredients from one area, be manufactured in a second, packaged in another, and distributed in a fourth.

Infiltrating this chain as early as possible gives criminals an edge. “You’re going to be able to distribute larger volumes and its probably going to be more difficult to trace it back up to you,” Bourdillon Esteve says.

These products can then end up in hospitals, pharmacies, or clinics. “You might have a hospital which is buying in good faith products from a wholesaler who might be dodgy, for example,” Bourdillon Esteve says.

It’s rare (but not unheard of) for this to happen in wealthy nations like the United States. But when countries lack the resources to keep an eye on what’s on the market, it leaves a void that criminals can exploit. “Countries where we’re seeing higher reporting of substandard and falsified medicines are generally those that don’t have that robust system that helps with a clear registration of products,” says Kate Bond, VP of International Regulatory Affairs at the U.S. Pharmacopeial Convention. They also lack “good laboratories that can test the quality of those products, a system that can over time survey and monitor the markets so that they know what’s there, [and] some sort of compliance and enforcement effort so they can remove the bad things from the market and protect patients.”

The Promoting the Quality of Medicines Program, funded by USAID, collaborates with countries to improve regulation and set up laboratories that can make drugs that meet strict standards for the ingredients, manufacturing, shelf life, purity, and other qualities of drugs, as well as which tests to use to make sure they are authentic.

“Increasing access to quality assured medicines, protecting patients from harmful medicines, all that requires that you have some of these foundational building blocks,” Bond says.

Over time, this gives criminals pause. It isn’t a cure-all; falsified or poor quality medicines thrive alongside corruption and are often plied by criminal cartels. But making it easier for developing countries to make and sell good quality medicines does mean that fewer shady products slip into the market. “Strong regulatory systems end up being a deterrent,” Nwokike says.

There are other creative ways to stymie criminals, such as confining .pharmacy domain names to legitimate online pharmacies. Another key step: making sure the general public isn’t easily hoodwinked. The WHO offers a few tips for people to protect themselves.

Doctors and consumers are key players in keeping everything running smoothly. Ideally, Bond says, “You have industry that manufactures to quality standards, you have a regulatory authority that oversees the quality…and you have a well educated provider and public that can help demand quality but also keep an eye out when there are problems.”

This protects individual people from falling prey to dangerous or ineffective products. But curtailing poor quality drugs is in everybody’s best interest for another reason, too. When substandard antibiotics don’t wipe out an infection, it helps to breed superbugs.

“What were really trying to do now is to pick up on where we some red flags, some early warning signals where we see more incidence reports of…antibiotics that are substandard,” Bond says. “Pathogens don’t respect national boundaries.”

Fake and poor quality medicines may be relatively uncommon in industrialized nations, but antibiotic resistance can find us anywhere. So making sure that everyone has access to good quality, affordable medicine helps protect us on a global scale.