What the heck are white rainbows, and where do they come from?

The lack of color is caused by tiny fog droplets 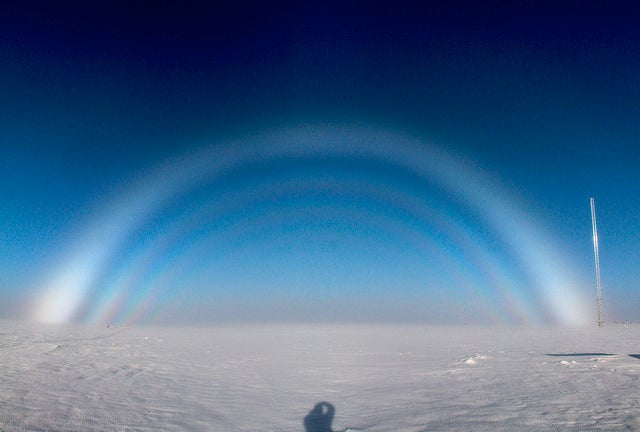 A photographer in the United Kingdom recently came upon a striking white rainbow hovering over Rannoch Moor in Scotland. Melvin Nicholson and a friend had just arrived at a tree he was hoping to photograph when they witnessed the phenomenon, he told ABC News.

“The sun started to rise behind us, burning off the mist, and at that point, the fogbow appeared,” he said. “I had never seen anything like it in my 10 years capturing landscape photos around the globe.”

White rainbows, which resemble normal rainbows with the color leached out, emerge from fog that is thin enough to be pierced by sunlight. Often, an observer can see a red or bluish tinge at the edges, while color in the middle is wiped out.

Like rainbows, fogbows can be seen when the sun is at your back. Fogbows and regular rainbows are both made when sunlight hits water droplets suspended in the atmosphere. “They’re just different in the fact that the water droplets in fog are way, way smaller than the droplets in your typical rain drop,” says Brian Jackson, a meteorologist at the National Weather Service.

To form a rainbow, that light bends, or refracts, as it travels from air into the water droplet, separating into different colors. Some light is reflected against the back of the droplet, sending it back the way it came (i.e., towards your eyeballs). On its way out, the light bends again as it passes from water back into air.

Violet light bends the most, red least. So red light is angled more steeply towards the ground than other colors. This means that red light leaving water droplets higher in the sky has a better chance of reaching your eyes. This is why we see rainbows as bands of colors with red on the outside.

The curve you see represents a kind of sweet spot, where the reflected and refracted sunlight is most visible from your position (this shape is actually a circle, interrupted by the ground; the entire ring can sometimes be spotted from airplanes).

As with a rainbow, a fogbow’s arc shape comes from the water droplets at the best angle shooting sunlight back to the viewer. But with fogbows, the colors are smeared out. Fogbows are made from fog droplets that are about 100 times smaller than plump raindrops. Most of this light is diffracted, or scattered, when it hits these tiny droplets, but some is refracted.

“Due to the small size of the droplets, the light waves don’t spend enough time within the droplet to refract enough to separate cleanly and focus into colors,” Jackson says. “So, they mostly continue to overlap, and appear white.”