Devices that harness brain or nerve impulses to help patients see, hear, move, and communicate are already available -- though for now they remain relatively primitive. 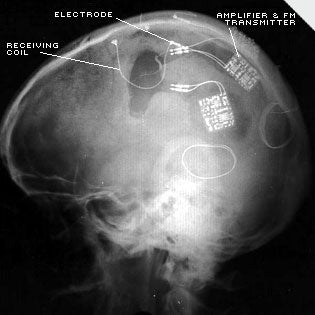 Neurologist Philip Kennedy has created
a device to help totally paralyzed people control a computer cursor — and thereby communicate — with their thoughts. An electrode (left) is surgically implanted into the patient’s motor cortex, the movement-controlling part of the brain; the electrical signals it picks up are converted to software commands. Learning to use the device is a process of mental trial and error: Patients think about making various movements and watch how those thoughts affect the cursor; over time they learn which thoughts make the cursor move up, down, right and left. The brain data is sent to the computer via an FM transmitter, so no wires are necessary. So far six people have tried the $100,000 Brain Communicator, which is made by Kennedy’s company, Neural Signals, in Atlanta, Georgia.

Surreal-looking spectacles designed by ophthalmologist Mark Humayun of USC are helping blind people regain some sight. Artificial retinas are implanted in patients’ eyes, then connected via wires to a small magnetic disc sutured onto the scalp. When a person dons the glasses, miniature video cameras pick up ambient light and turn it into electrical impulses, which are transmitted wirelessly to the magnetic discs and, from there, sent via the retinal implant to the brain’s optic nerve, recreating the natural sight pathway. The device offers patients only fuzzy spots of light in a limited field, but Humayun hopes to improve resolution by determining which patterns of electrical pulses most effectively stimulate the optic nerve.

Cochlear implants (left), small electronic devices implanted under the skin behind the ear, have helped 59,000 people worldwide regain some hearing. In a healthy person, the inner ear converts sound waves into electrical impulses, which activate a nerve that sends sound signals to the brain. A cochlear implant mimics this natural process. The device’s speech processor turns sounds picked up from a microphone into electronic bursts, which stimulate the auditory nerve to create the perception of sound in the brain.

Three years ago utility-line repairman Jesse Sullivan touched a live wire, burning his arms so badly they had to be amputated. But a technique devised by biomedical engineer Todd Kuiken, director of amputee services at the Rehabilitation Institute of Chicago, enables Sullivan to control his artificial left arm with his mind alone. Kuiken grafted nerve endings from Sullivan’s shoulder onto his chest muscle. When Sullivan thinks about raising his arm, his brain sends signals to the nerves that once initiated this function; the nerves spur his chest muscle to contract; and electrodes on the graft pick up those twitches and translate them into prosthetic-arm movements.