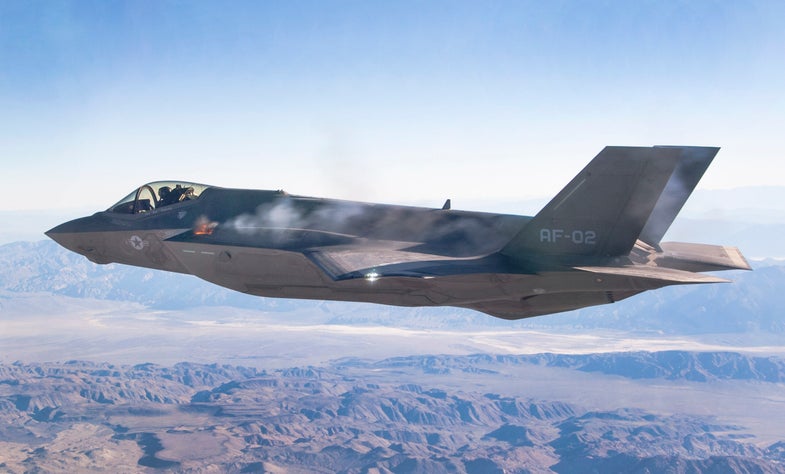 For between $98 million and $108 million each, it’s possible for America to still make a fighter jet with a gun that works. The Air Force’s F-35A, the cheapest version of America’s newest and priciest stealth fighter, successfully fired its 25mm gatling gun in midair on October 30th. It looked like this:

That’s three bursts. The first is 30 rounds, and the second and third are each 60 rounds. After firing, the F-35A pilot would have 31 rounds of its initial 181 left in its gun. The gun fires at 3,000 rounds per minute, which means a pilot can be out of ammunition in under four seconds of combat. The Marines’ F-35B and the Navy’s F-35C variants will each carry 220 rounds of ammunition in external “conformal pods”, rather than internally like in the F-35A. Their guns run out of ammo after six seconds of firing instead.

In normal flight, the gun is hidden behind a retractable panel, so it doesn’t take away from the plane’s stealthy profile. F-35 makers at Lockheed Martin say the gun “will provide pilots with the ability to engage air-to-ground and air-to-air targets.” Since pilots have it, that’s invariably how they will use it, but it’s likely to be a worse tool for attack than the guns on the planes the F-35 is replacing. The 20mm gun carried by the F-16 fighter-bombers deploys a smaller round each burst, but it also carries over 500 rounds of ammunition to battle. The F-35 is also replacing the A-10 ground attack plane, whose powerful 30mm cannon was fed by a magazine holding 1,350 rounds of ammunition. As it replaces both of these planes, F-35 pilots will have the gun as an option in battle, but to win a fight, they may need to rely on other weapons first.

Watch a clip of the firing below, in which F-35 test pilot Maj Charles “Flak” Trickey discusses the flight: