You Can Preorder The HTC Vive Pre Virtual Reality Headset On Feb. 29 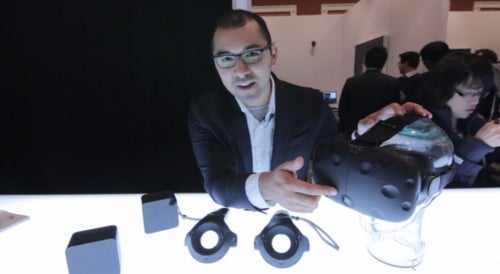 Update: The HTC Vive VR headset will be available for pre-order for $799 on HTC’s website beginning on Monday, February 29, at 10 a.m. EST.

The HTC Vive is one of the most advanced virtual reality headsets in the world. It’s so groundbreaking, we gave it the Grand Award in our 2015 Best of What’s New issue, meaning that it was identified a technological breakthrough that will have an impact on our world for years to come. The VR headset’s spatial recognition features and its wireless controllers added a level of immersion that’s just never been seen in VR headsets before.

At CES 2016, HTC upped the ante. It added a small front-facing camera to the second-generation HTC Vive headset, and renamed the product the Vive Pre. For the most part, the camera was added to prevent people from bumping into objects in their living room or wherever they’re using the VR headset. But Valve is also opening the camera up to developers, so that they can come up with more interesting uses, allowing programmers to blend real and virtual worlds together in gameplay.

Now, HTC is ready to sell the high-end VR headset. The HTC Vive Pre will be available for preorder starting February 29. HTC CEO Cher Wang told the Telegraph that the company will be lowering the priority of smartphone shipments to make way for newer products like their virtual reality headset. The announcement comes about a week after Oculus, one of HTC’s biggest competitors in the VR industry, opened pre-orders to its Oculus Rift headset for $599.

The Vive was originally slated to ship by the end of 2015, but the company pushed back the shipping date to make room for what was called “a very big technological breakthrough.” ahead of the new year. The delay was no surprise to anyone who’s followed Valve’s product cycles in the past. The company is known for something called Valve Time, in which the company frequently misses its own deadlines. For more on the HTC Vive ahead of its Feb 29 release date, check back on our continuous virtual reality coverage.