You may have heard of this scheme before: during periods of serious drought, a huge tugboat or fleet of tugboats... 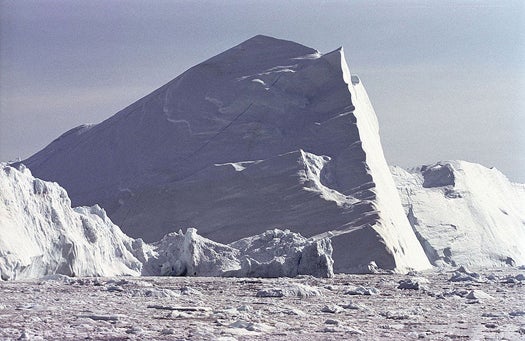 You may have heard of this scheme before: during periods of serious drought, a huge tugboat or fleet of tugboats could be tethered to an iceberg and hauled to areas where water is scarce, providing drinking water and irrigation stores to stave off famine. The idea was originally floated by an engineer named Georges Mougin in the 1970s, and though it was laughed out of development back then, it’s enjoying a kind of renaissance today.

Dassault Systemes, the french software developer, has built a computer model of Mougin’s idea. And after 15 engineers ran the problem through their models, they found that the idea is more or less perfectly feasible. Towing an iceberg from somewhere around Newfoundland to the northwest coast of Africa would only take around five months and could still retain more than 60 percent of the iceberg’s mass. The downside: it would cost about $10 million.

The simulation accounted for the costs associated with fitting a huge insulating sleeve around a seven-ton iceberg, towing it across the Atlantic via tugboat and kite-sail (at a speed of about one knot), and then distributing the water inland from the coast. A real-world attempt would likely call for a much larger iceberg–a 30-ton iceberg could keep half a million people in drinking water for a year–but the fundamentals, the model says, are sound.

Since some 40,000 icebergs break away from the polar ice caps each year anyhow, it would make productive use of the fact that we’re all slowly drowning (though few of those ‘bergs are big enough to be worth towing). And it could help deal with serious drought-related human disasters like the one currently unfolding in Somalia.

For his part Mougin is reportedly re-energized by models. At 86, he’s raising funds for a real-world attempt at making his idea a reality.