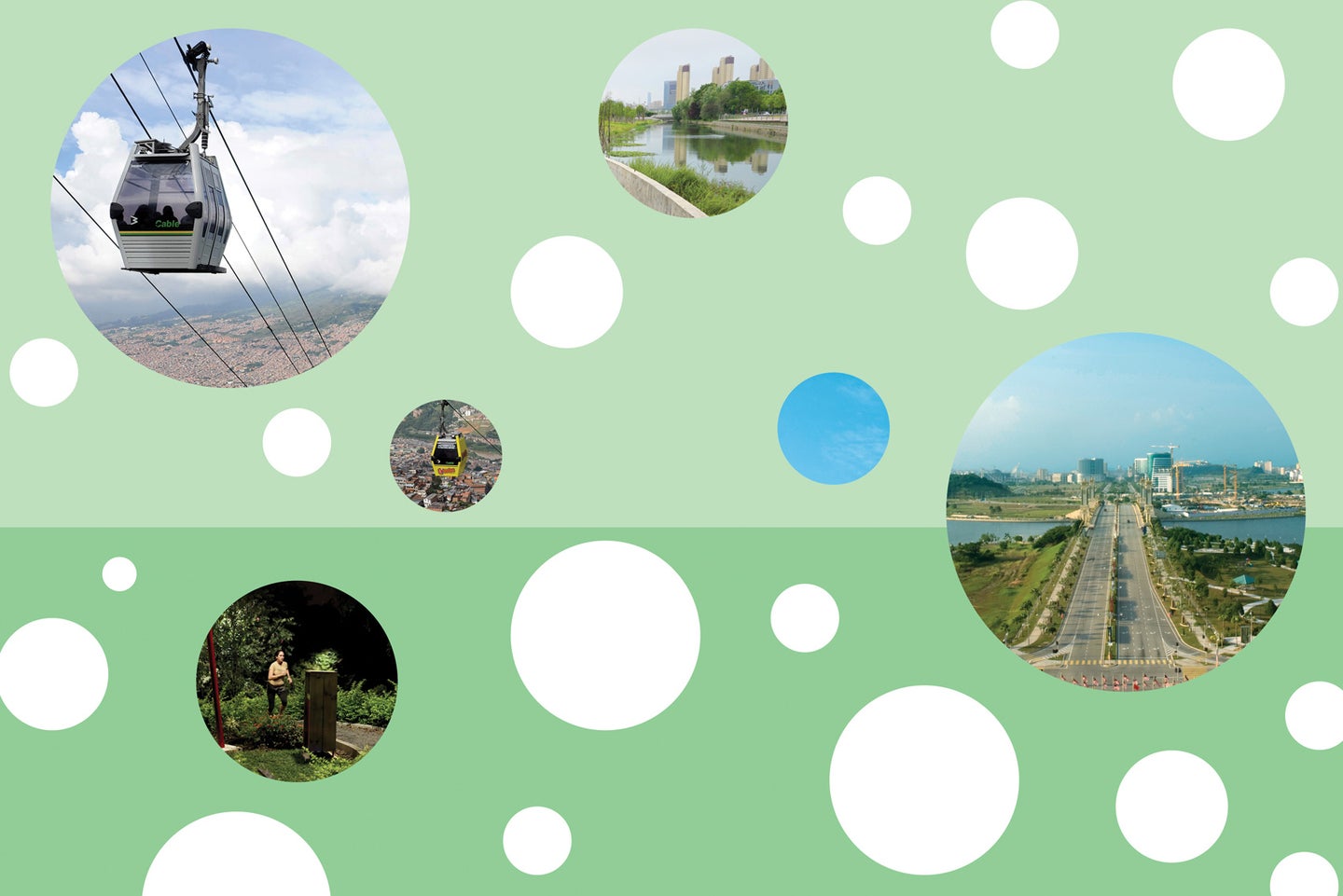 Welcome to the new and improved metropolis.

HUMANITY HAS BEEN kicking around for a long time, so it’s hard to find cities that are distinctly “new.” But the rare newcomers, together with reinventions of aging metropolises, are tackling age-old problems in novel ways. We suggest the rest of the world take notes.

From Rome’s vast Trajan’s Forum to Angkor Wat’s stone temples, cities have been magnets for trade, art, and culture since ancient times. Urban living as we know it first emerged around 3500 B.C.E. along the Nile Valley and Sumerian coast. Unlike the semipermanent villages that came before them, these social and political hubs were built around sophisticated systems of agriculture and transportation. Today, around 56 percent of the world’s population is urban, and by 2050 that number could jump to around 70 percent, by some estimates.

But with these obstacles come opportunities to reimagine our densest spaces. In the past two decades alone, more than 150 new cities have sprung up from scratch in more than 40 countries, and centuries-old settlements have begun to replace their crumbling infrastructures and establish radical new ways of living. Here are seven centers of innovation tackling the most daunting issues of our time—from climate change and overcrowding to biodiversity loss and poverty—that can serve as blueprints for communities around the globe.

In the 1980s and ’90s, Medellín became infamous as the center of Colombia’s drug trade. At the same time, growing political violence in rural areas meant hundreds of thousands of people fled to urban centers in search of safety and economic opportunity. Informal settlements cropped up along the slopes of the Aburrá Valley, where low-income housing crowded on the fringes of the city at an average of around 160 dwellings per acre (about as dense as downtown Chicago or Portland). Public transit couldn’t navigate the steep terrain, narrow streets, and numerous streams. The city’s most disenfranchised faced hours-long commutes to jobs and basic services, and became increasingly isolated—geographically, socially, and economically. Years of research suggest areas of concentrated poverty experience higher crime rates, poor health outcomes, and low school attendance—but more robust public transit can help create more equitable cities. In 2004, Metro de Medellín introduced a creative, low-cost solution: the first aerial cable car system fully integrated into public transport. Average trip times dropped from 120 minutes to 65. Some planners think it could be a useful model for other cities—from Seattle to Mumbai—where low-wage workers are pushed to the periphery. Medellín’s success has inspired similar projects throughout Latin America, including in Caracas, Mexico City, and La Paz.

The desert city of Phoenix is one of the fastest-growing metropolitan areas in the United States, having added more than 750,000 residents in just the past decade. It’s also known for being one of the worst culprits when it comes to urban sprawl, meaning residents rely heavily on cars. Just outside Arizona’s unsustainable capital, a new apartment development called Culdesac Tempe has set out to be the first automobile-free community created from scratch in the US. Conveniently located along the light-rail line to downtown Phoenix, this neighborhood sits on a 17-acre lot and will feature a restaurant, a coffee shop, an urban market, e-bikes, scooter shares, and 761 apartments. The first residents—who are strictly forbidden to bring in cars or park in surrounding neighborhoods—are expected to arrive in 2022. While Culdesac Tempe’s no-car rules may seem extreme, it’s the kind of radical action cities are embracing to cut down on parked cars, combat greenhouse gas emissions, and boost health among city dwellers. In fact, the “15-minute city”—a bold urban planning concept based on the idea that everyone should be able to access all their basic needs with a short walk or bike ride—is gaining traction around the world. Paris, for example, has added bike routes and created mini green spaces to increase connectivity and reestablish social connections.

Amsterdam was originally founded as a small fishing village in the 13th century, but today it’s home to around a million people who live 6.5 feet below sea level. To accommodate the still-expanding population, the locals have had to get creative: They’re making more land. In 1996, the construction of IJburg, an archipelago made up of 10 artificial islands, began. The Dutch used a technique called the “pancake method” to form a solid, compacted base. Builders create mesh screens in the size and shape of the future island and secure them underwater without harming wildlife. Then they spray the screens with a layer of sand, which slips through the porous mesh and eventually settles and becomes compacted on the lake bed. Another coating is then sprayed on top, and then another—like pancakes in a stack. When the sand rises around six feet above the water, an island is born. Thus far, four of the seven islands are complete, with networks of buildings, businesses, and walking and biking bridges, all within a 15-minute tram ride of Amsterdam’s Central Station. The idea is to moor floating homes to the new land so they can rise with the sea. IJburg is intended to house up to 45,000 people in 18,000 homes, and it could serve as a model of resilience for the 570-plus other cities that are currently at risk from sea-level rise and storm surges by 2050.

Located on the outskirts of Nairobi along the Ngong River, the informal settlement of Kibera is home to about a quarter of a million people living on less than 1 square mile. A typical dwelling is about 12 feet by 12 feet and houses eight or more. Poor drainage, sanitation, and housing infrastructure combined with increasing rainfall mean the largely makeshift structures are especially vulnerable to severe flooding. So in 2006, the nonprofit Kounkuey Design Initiative (KDI) established the Kibera Public Space Project, a network of community-run gathering spots that build flood resilience while creating room for recreation and small businesses. One site serves as a gathering area, school, and place of worship, while its rooftop is used for rainwater harvesting, a technique used to collect and store droplets. When the precious stuff hits the roof, instead of letting it pour freely onto the ground, where it would contribute to flooding, a system of gutters and downspouts channels the liquid into storage tanks, where it can then be used to irrigate a connected greenhouse. KDI has also designed zones that focus on the needs of women and children—like community laundry facilities that sit next to play areas—so women can balance household work and childcare. To date, more than 5,000 residents have been involved in KDI design projects, including the installation of 2,755 feet of new drainage infrastructure, the planting of vegetation to help absorb precipitation, and the construction of these 11 climate-resilient public spaces. These efforts have directly reduced the flood risk for an estimated 8,000 households.

In the 1980s and ’90s, the Malaysian government sought to consolidate its offices and alleviate traffic in the increasingly congested capital. Putrajaya is the country’s urban solution to both overpopulation and pollution. In addition to new infrastructure, it built something more innovative: artificial wetlands. Construction began in 1997 and took 17.5 months to complete. Because wetlands double as natural water-filtration systems, they were created in the valley of the Chua and Bisa rivers, which had been polluted by oil palm and rubber plantations. Builders dug a network of 24 wetland cells, or earthen depressions, and divided them with low dams to create steplike levels. (This design allows water to flow through the cells and empty into Putrajaya Lake.) Each cell was then filled with topsoil, planted, and fully inundated; along with other open spaces like parks and botanical gardens, they now make up more than one-third of the urban area. The wetlands also host more than 25 species of plants and provide habitat for fish and waterbirds. And the government isn’t stopping there. By 2025, Putrajaya aims to become a “green city,” and it has already increased bike paths and walkways and planted hundreds of thousands of trees to sequester carbon.

Costa Rica covers about 0.03 percent of Earth’s surface but is home to about 6 percent of the world’s biodiversity, and it is a leader in conservation. But San José and the surrounding metropolitan areas aren’t immune to the ways modern urbanization impedes those efforts. Just outside the capital, though, Curridabat is doing things differently. Known as Ciudad Dulce (or Sweet City), the district is promoting the idea that healthy urban development should accommodate nature, not the other way around. To put this idea into practice, Curridabat launched reforestation projects, converted natural ravines into public parks, and created tree-covered walking and biking paths. These so-called biocorridors provide habitats for animals, plants, insects, and birds, all while controlling air pollution, keeping the area cooler, and offering shade to residents on hot days. In February 2021, on the second anniversary of Costa Rica’s commitment to a national plan to reach zero net emissions by 2050, the government announced a new conservation category to protect at-risk ecosystems in cities across the country: Urban Natural Parks. La Colina de Curridabat Ecological Park is among the first to be granted the designation. Cities around the world should pay attention: Urban parks and green spaces have been shown to promote better mental health, boost social cohesion, encourage physical activity, reduce noise and air pollution, and protect from extreme heat.

Between 1950 and 2018, flooding in China killed an estimated 280,000-plus people and damaged nearly 15 billion acres of land. The nation isn’t alone. According to climate change projections, extreme precipitation and flooding are going to increase worldwide, and cities are especially vulnerable. That’s because vegetation, soil, and trees—which naturally absorb and store groundwater—are scarce compared to highways and buildings. Nestled on the banks of the Yangtze River in eastern China, Zhenjiang is just one of the country’s zones at high risk for inundation. In response to this growing threat, it was one of 16 pilot locations for the “sponge city” project in 2015. The goal is to transform at least 20 percent of the land into permeable surfaces—including parks, rain gardens, green roofs, and pervious pavement—so that neighborhoods can absorb heavy rains. Since the effort launched, Zhenjiang has implemented a rain garden, expanded green spaces, and built storage systems to purify and reuse a deluge. Some 658 Chinese locales have also enacted government-mandated sponge city designs, adapted to their unique geographical needs. Meanwhile, other areas at risk of urban flooding across the globe are deploying their own greening projects to help absorb heavy precipitation, from Philadelphia’s Green Acres program to Cairo’s rooftop garden initiative.