Chicago now has a 124-mile quantum network. This is what it’s for.

Quantum memory, entangled particles, and other concepts at the bleeding edge of computing. 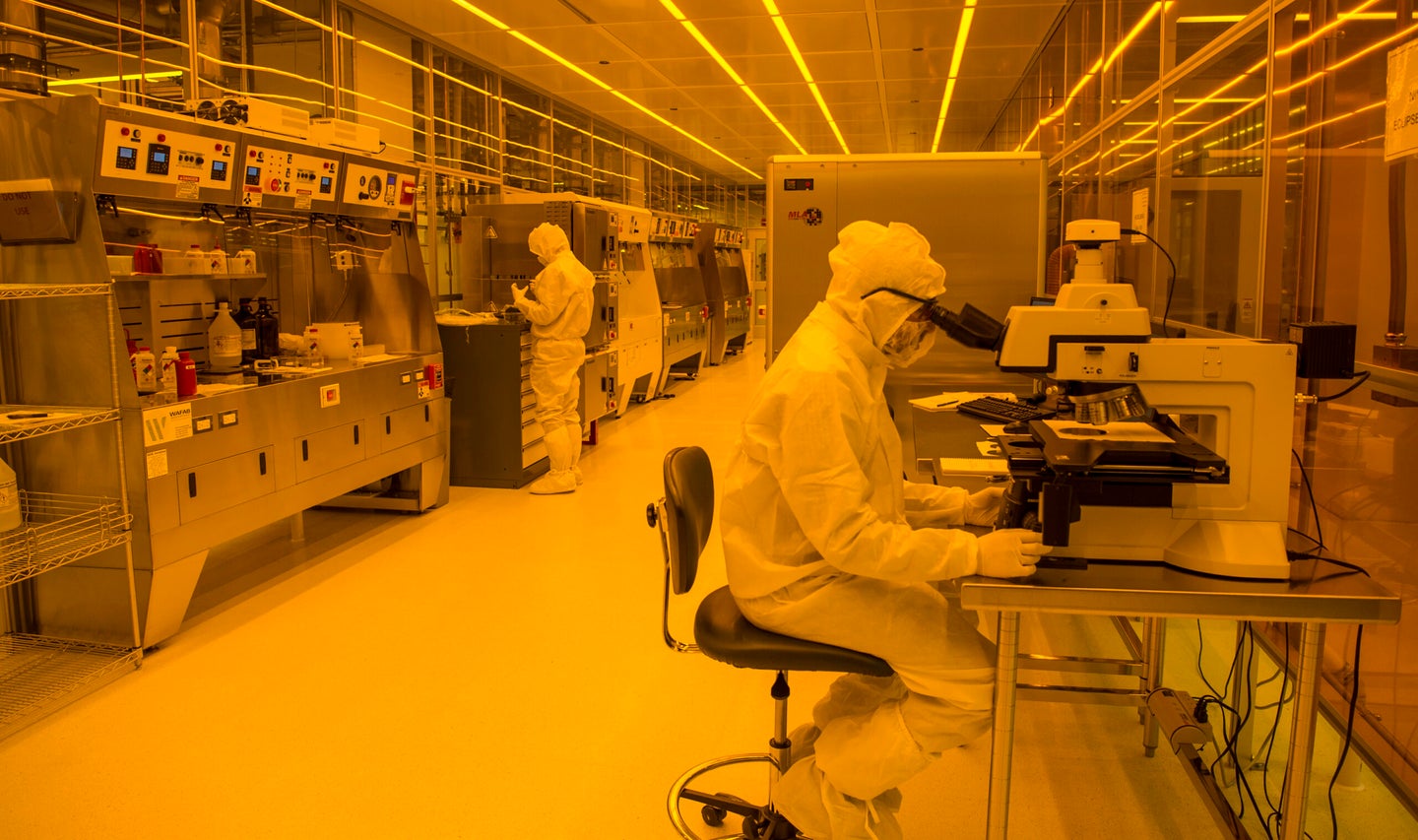 The Pritzker Nanofabrication Facility at the University of Chicago is developing tools for the quantum network. Robert Kozloff
SHARE

Earlier this month, a group of research labs in Chicago unveiled an extended, 124-mile quantum network running from the suburb of Lemont, through the city of Chicago, to the Hyde Park neighborhood and back. That total length accounts for a newly added, 35-mile-long segment of optical fiber that was recently connected to an 89-mile quantum loop the US Department of Energy’s Argonne National Laboratory launched in 2020, linking labs from the Chicago Quantum Exchange and the University of Chicago.

The intention behind building such a network is to enable researchers to experiment with new types of quantum communications, security protocols, and algorithms with the goal of advancing towards a preliminary quantum internet (which could very well look like an early version of the classical internet). Currently, Toshiba is using it to test their distributed quantum encryption keys in a setting that experiences factors like noise, weather, and temperature fluctuations in order to understand how robust this method is, and what potential issues may come up.

The researchers have been able to send information so far at a speed of 80,000 quantum bits (or qubits—more on what those are below) per second. These kinds of experimental keys could be useful in a future where powerful quantum computers threaten to break classical encryption, an issue that has been highlighted by lawmakers in Congress.

“Let’s say you have a quantum computer that’s up to 1,000 qubits. And here you have a second computer that’s 1,000 qubits. You’d like to wire them together in the same way we build supercomputers today by making clusters, but you can’t just wire the computers using classical wire. You need a quantum wire to keep the quantum states of both machines,” says David Awschalom, a professor at the University of Chicago and a senior scientist at Argonne National Laboratory. “So, a quantum communications channel is a way to do that—basically building a way for two quantum circuits to talk to one another without ever entering the classical world.”

Probing at the possibilities of quantum communications

Because this is the quantum world, things work a little differently. To start, for objects to exhibit quantum qualities, they have to either be very cold or very small. Chicago chose small.

“Many of today’s commercially available quantum machines are usually superconductors, so they have to have very low temperatures,” says Awschalom. “Quantum communications use photons, and the polarization of the light encodes the information.” That means the network can be operated at room temperature.

Using photons means that they could also use the optical fibers that today’s classical communication flows through. But here’s where problems start to appear. Optical fibers are made of thin strands of glass, and glass has imperfections. When single photons, or pulses of light, travel down them, it can go smoothly for a bit, but over time and distance, the amplitude of the signal shrinks because the light scatters off impurities. For the classical internet, the solution is repeaters. These are thumb-sized devices that are put at every 50 miles or so to amplify the signal and send it on.

The quantum world has tricky rules. Quantum bits (qubits), unlike classical bits, are not either a 0 or 1. They’re a superposition of the two, which means that they can be either 0, 1, or both at the same time. You may see a qubit depicted as a sphere with an arrow emanating from its center. You can’t copy a quantum state (see the no-cloning theorem), and looking at it or observing it pulls it out of superposition, so you destroy the qubit. (The advantage this brings  is that it makes quantum links tamper-proof).

The quantum signal can still traverse distances in a city through a fiber without a repeater. However, for the future, there are some ideas to extend its range. One is to go through air to a satellite, and then back (this is what researchers in China are doing). But in air, light can also get absorbed by moisture, and a lot of the photons don’t make it back to Earth (NASA is trying to see if they can improve the stability of entangled in space). With optical fiber, you can tune the signal, and you can see where it is, and you can send off multiple frequencies of signals concurrently. Plus, you can take advantage of existing infrastructure. Awschalom imagines that a future quantum network will take advantage of both fiber and satellite communication, maybe fiber for short distances, and satellite for longer distances.

Another idea is to employ a trick called entanglement swapping. This is where the different nodes come into play (Chicago’s network currently has six nodes). Nodes don’t refer to a gargantuan quantum computer with hundreds of qubits. In most cases, they’re a type of quantum memory, which Awschalom likens to a tiny, simple quantum computer. You can put information in and you can take it out.

“Let’s say I can barely get my [quantum] state to you. You would like to send it to somebody else in another location. But we don’t have a repeater,” he says. “What you might be able to do is take the entangled information without looking at what it is, put it into a memory and then you can swap it into something else.”

Creating quantum keys for encrypting information is a practical application of quantum communication through entanglement. Entangled particles would behave like they’re connected no matter how far apart they are. That means if you look at one particle, it will change the other, and if you look at both, their measurements will be correlated. Once you establish entanglement, distribute the entangled state, and maintain it over distance and time, you can use that property to instantaneously convey information.

Classical keys, which work like ciphers for information, are generated from algorithms to encrypt information and make it secure. These algorithms typically contain a mathematical function that can easily be solved in one direction, but are hard (though not impossible) to reverse engineer.

“It’s actually hard to make keys that are tamper-proof, that you can’t either work backwards and figure out how the keys were generated, or it’s hard to keep people from copying the key,” Awschalom says. “And you don’t know if someone copied it.”

A quantum key is generated through quantum mechanics, and the pair of keys that is distributed between the sender and recipient are intimately connected through quantum entanglement. In the Chicago experiment, the quantum keys are sent via photons that have had their properties tweaked (through factors like polarization directions) to encode the bits. Nobody can copy or intercept the key without destroying the quantum information.

Quantum keys can be comprised of a string of quantum bits. “The quantum key is a function of the basis state. You have a coordinate system to read it,” Awschalom explains. “Your ‘bit’ and my ‘bit’ are correlated. So it’s very different from a classical key. If somebody scrambles your key it will scramble mine. I can also be sure that you’ve received it, based on the way that I received my key.”

A testbed for new tech

The quantum field, despite all the hype, is still in its early stages. That means researchers don’t know for certain what’s going to work well and what’s not. Part of how that ambiguity will be probed at by this network is the fact that the different nodes at the different laboratories across Chicago are all experimenting with different strategies. “For example, right now we have a cold atom lab as one of the nodes, so you can actually take quantum communications information, and put it into a simple trapped atom, and then extract it,” Awschalom says. His lab, another node in the network, is integrating magnetic atoms from the periodic table to store and send quantum information. Another lab is working with superconductors. “Each node is designed to amplify different technology ideas,” he says.

They’re also planning to open up this network to outside researchers and companies that can come in, plug and test their prototype devices and detectors, and run them.

Quantum keys are just the beginning when it comes to the possibilities of distributed entanglement. “There’s a lot more you can do when you think about distributing information differently,” Awschalom says, with global sensing of the environment as one example. “Today we’re probing the world with classical sensors mostly, but the world is quantum mechanical. It does beg the question—what are we not seeing only because we’ve never looked? Between these sensing technologies and a way to bring the sensors together, I’m optimistic that we’re going to learn a lot.”