With budget cuts looming, the DHS could replace some of its military aircraft with easier-to-maintain commercial planes. 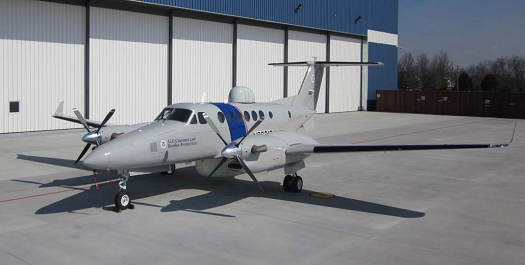 With the War in Iraq over and the War in Afghanistan winding down, the Department of Homeland Security has the option to acquire hand-me-down aircraft from the Armed Forces to fill out Coast Guard and Border Patrol fleets. But with 8.2 percent budget cuts due in March, the department may lack the funding to repair and refurbish combat-battered planes.

Fortunately, the DHS has a cheaper option: adapt commercial aircraft for coast and border patrol. A new report from the public-policy think tank Lexington Institute explains that commercial airplanes come with a large civilian market and supply chain, making replacement parts much cheaper than their military equivalents and allowing the planes to be in service much longer than war-worn aircraft.

One promising commercial option is the Super King Air 350, which has already been adopted by several air forces, including that of the British Royal Navy. The Super King is notable for its fuel efficiency, ability to take off from relatively short runways, widespread commercial supply chain, and, importantly, 1,500-mile range. A fact sheet about the plane published by Customs and Border Patrol also describes a trio of sensors and radar that would make the Super King very useful for patrolling vast stretches of border and coast.

The budget realities facing the DHS, along with the recommendations in the Lexington Institute report, can tell us a bit about the desired future of Homeland Security aircraft use. That future may continue to include drones and surplus military helicopters and aircraft, but it is just as likely to feature cheaper, manned commercial planes with the same sensors doing similar patrols.