Blueprint: A Mini Sub That Could Steer Through The Body

About the size of "Abraham Lincoln’s head on a penny," the device could travel through your body to deliver drugs and take samples. 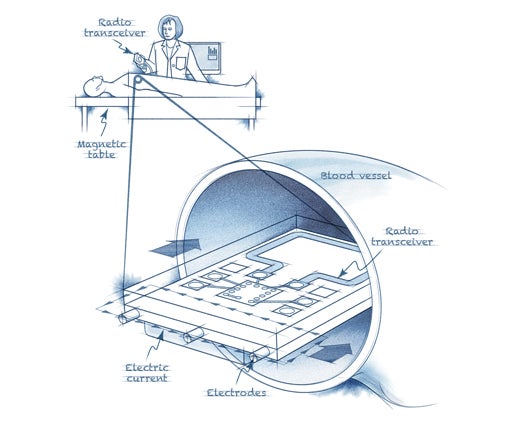 “In the future, tiny vehicles might travel through your body to image your insides, take samples, and deliver drugs. At Stanford University, my colleague Anatoly Yakovlev and I built a prototype of such a device. It’s about the size of Abraham Lincoln’s head on a penny. We power and control the prototype wirelessly by sending radio waves to its two-by-two-millimeter antenna from about two inches away. No battery is required, which is key to miniaturization.

Mechanical propulsion is inefficient at this scale. Instead, we use magnetohydrodynamic propulsion, which takes advantage of the fact that an external magnetic field can push an object by creating a Lorentz force on its electrical circuitry. We operate the device near a magnet—we imagine the patient lying on a magnetic table—and use radio waves to tell the prototype how to use its electrodes. The electrodes send electrical current through the surrounding fluid, creating a net force that moves the device. With an upward magnetic field, a counterclockwise electrical current pushes the device forward and a clockwise current pushes it backward. By making circuits that create opposing forces on each side, we can also turn the device left or right.

With our relatively weak magnet, the prototype moves 0.2 inches per second in a dish of saline. If it were in the blood stream—cleaning out your arteries, for example—you’d need a stronger magnet to overcome the flow of blood. But that is still a ways off. In the near term, we imagine using the device to image the GI tract; there, it wouldn’t need to travel as fast. It could reduce the cost of cancer screenings, and it would be a welcome alternative to at least one traditional method: colonoscopy.”

—Daniel Pivonka, an electrical engineer, worked on the tiny vehicle project while a graduate student at Stanford. As told to Flora Lichtman.