Video: Wireless Devices Swim Through Your Bloodstream and Fix You Up, ‘Fantastic Voyage’ Style 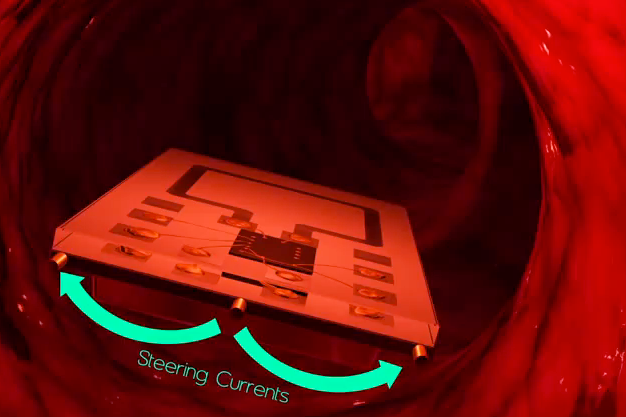 Implantable medical devices will eventually dispense drugs, get rid of blood clots and perform micro-surgeries inside our bodies, but powering them could be problematic. If the point is to have minimally invasive gadgets keeping tabs on our health, cutting patients open to swap out their batteries is not an ideal situation.

A new micro device solves that problem elegantly, while upending some assumptions about how our bodies work. It’s powered by induction, which thanks to some new calculations has been shown to work much better in our bodies than anyone thought. All you need is an external radio transmitter to keep it humming.

Stanford engineering professor Ada Poon demonstrated a new wireless device at the International Solid-State Circuits Conference this week. It can travel in the bloodstream, propelling itself through blood vessels and performing an array of tasks. A radio transmitter outside the body sends a signal to a magnetically coupled antenna, and any change in the transmitter’s current induces a voltage in the antenna.

In previous research, engineers have assumed device antennas would have to be fairly large to work inside the body and receive a signal through all that tissue and fluid and fat. But it turns out this assumption was wrong, as a Stanford news release explains it.

Poon rethought some calculations, and instead of considering bone and muscle as electrical conductors, she thought of them as a dielectric, a type of insulator. Her calculations showed that while human tissue is a poor conductor, radio waves travel through them 100 times farther than originally thought. So this means antennae could be 100 times smaller than everyone thought, and still be just as powerful. The antenna on the device Poon demonstrated at the conference is just two millimeters square.

She already developed two prototypes, which both create their own propulsion by driving an electrical current through bodily fluid. It may be some time before patients swallow antenna-pills for diagnostic testing, but when they do, they may look a lot like this.