This Accelerator Can Supply A Whole City With Medical Isotopes Overnight

A refitted cyclotron could solve the shortage of Tc-99m, an isotope used in medical imaging. 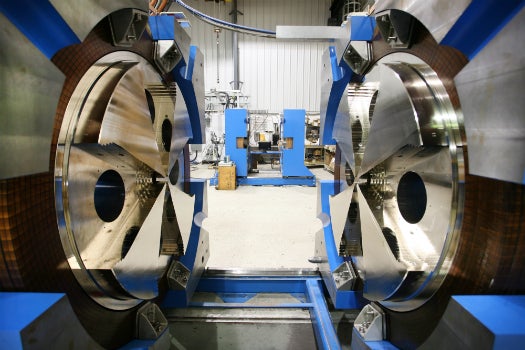 Researchers at the BC Cancer Agency in Vancouver and TRIUMF, the Canadian national particle and nuclear physics lab, have successfully produced vital supplies of Technetium-99m, a medical imaging isotope, using a retrofitted cyclotron, a type of particle accelerator already in place in hospitals.

Using this technology, metropolitan areas could combat the increasing shortage of Tc-99m, an isotope that can be used in medicine to see how the heart and other organs are functioning.

This isotope has traditionally been created through the fission of weapons-grade uranium, which produces a radionuclide called molybdenum-99. Mo-99, which has a half-life of 66 hours, decays into Tc-99m. It’s now produced largely at two nuclear reactors, one at Chalk River in Canada and the other in the Netherlands. Both facilities are in the process of shuttering production, and will close by 2016, leading to a potential shortage in Tc-99m. About 80 percent of diagnostic nuclear imaging procedures require Tc-99m, according to the European Nuclear Society.

For more than a year, a TRIUMF-led team of Canadian scientists has been working on adapting current cyclotrons, a type of particle accelerator used in hospitals to create other radioisotopes for nuclear imaging and research, to produce Tc-99m. In February 2012, they demonstrated that they could feasibly retrofit existing cyclotrons. On Sunday, they announced that the technology had successfully produced 10 Curies’ worth of Tc-99m in a six-hour overnight shift–enough to use in treating 250 patients, a large enough supply to satisfy an urban area the size of Vancouver for the day. Tc-99’s half-life is only six hours, making it difficult to store or transport.

Nature reports that the team from TRIUMF has “done further work on the needed metal target, making it strong enough to not melt under the heat of the beam, but porous enough to dissolve rapidly in solution so the [Tc-99m]  can be extracted for use.”

Eventually, the need for Tc-99m should decrease as the more advanced (and expensive) PET, or Positron Emission Tomography, becomes a more widely-used form of scanning. With the TRIUMF upgrades, the same cyclotrons that are used for PET scans could produce Tc-99m in the meantime.