Passive-Walking Robot Can Stroll Downhill Forever With No Power Source

When I was your age, to get to school I had to walk uphill both ways, frequently during snowstorms. (It... 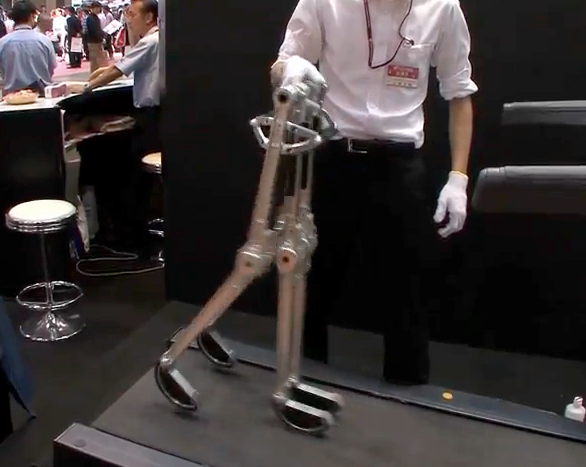 When I was your age, to get to school I had to walk uphill both ways, frequently during snowstorms. (It was good exercise.) Imagine walking downhill both ways — how easy that would be! Gravity would be a friend and not a foe! It’s so simple, even this bodyless robot can do it. Its golf club legs can amble in perpetuity, powered by nothing but its own forward momentum.

This robot has only mechanical parts, which have been designed to mimic the lower limbs of a human in both form and function. It has thighs, shins and ankles, and it tips the scale around the weight of an average human. It was designed at Nagoya Institute of Technology’s Sano Lab, which put it through some impressive paces in a walking test — it set a Guinness World Record by walking continuously for 13 hours, taking 100,000 steps and covering 15 kilometers, according to the video news site DigInfo.

This type of forward falling motion is not exactly a new concept — when I was your age, I had a Slinky, too — but it’s an interesting reminder that robotic technology doesn’t necessarily need tons of servos and articulated limbs to accomplish a complex task. Three simple joints are enough to keep the robot moving almost perpetually, as long as it has a slight downward grade on which to walk. There are no computer chips or electronics at all, other than those on the treadmill.

The designers envision deploying the robot’s walking strategy in sporting equipment, according to DigInfo. We can also imagine it doing quite well in games of robotic endurance, in which competitive bots walk a marathon and kick soccer balls around. The design might also someday be used as a prosthetic device or artificial legs. Check it out: