Did you know it was Glasgow docs who developed diagnostic ultrasound in the 1950s? 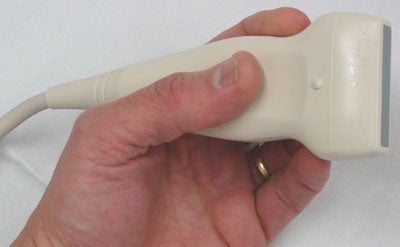 The technology is similar to the type used on pregnant women to image growing fetuses, but it uses a different sound frequency and a different pulse rate, according to the BBC. Patient Gary Denham received the treatment for a shattered ankle he sustained after falling 20 feet. “It’s got a wee strap and that goes round where the break was,” he told the BBC.

A water-based gel is applied to a transducer like the type seen above, which then goes inside the strap and stays there for 20 minutes. The patient doesn’t feel anything, but the sound waves penetrate tissue to stimulate cellular activity.

Typically, Denham’s type of injury would take six to 12 months to heal properly — if it does at all — but his foot healed after four months, according to his physician, Dr. Angus MacLean. He said evidence suggests the ultrasound speeds up healing by about 40 percent.

Scottish doctors first developed ultrasound as a diagnostic tool in the 1950s, using adapted sonar technology from Glasgow’s Western Infirmary, the BBC explains. It’s now used for a wide range of diagnostic and therapeutic purposes — we’ve seen ultrasound used to heal punctured lungs, for instance, and it has the potential to break up blood clots, among other uses. But the Glasgow group is the first we’ve seen to use it for bone regeneration.

Apparently the treatment remains fairly expensive, so for now it’s only being used in complex fractures like Denham’s, the BBC says. But as ultrasound devices get smaller and cheaper, future fractures may be much faster to heal.